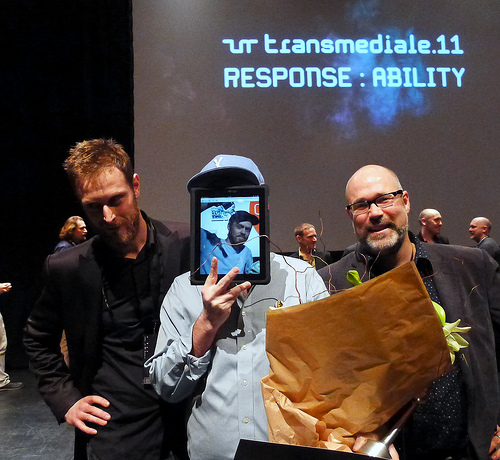 Mozilla is moving beyond software, looking for ways to bring open technologies and culture into new areas like art, media and education. We recently sponsored the Open Web Award as part of the Transmediale art festival in Berlin, Germany, combining digital art and the open web. With our new Mozilla Drumbeat initiative, we are engaging creators globally to shape the future of the web.

We were really excited to see more than 100 submissions for the Transmediale Open Web Award. The jury narrowed it down to three great contributions that all show potential, and could be seeds for incredibly exciting developments for art and the web in the coming years.

The winner – Graffiti Markup Language – enables the capture of graffiti motion data and turns it into something that can be shared and manipulated indefinitely. One can imagine not only great and exciting graffiti art but all kinds of motion expression. Just like the web itself potential of GML is totally open ended. Like LEGO, anyone can built whatever they want with it. For Mozilla, GML also has great educational value because it explains open data and standards in a surprising and fresh way to new people. We congratulate Evan Roth and the GML community on winning the award. Jesse Scott from Graffiti Research Labs in Berlin accepted on behalf on Evan Roth.

We also want to award a distinction to the other two finalists, Booki and Thimbl. Like GML, they represent exciting opportunities for creative expression on the web.

Mozilla Firefox 4 Beta, now including “Do Not Track” capabilities