Editor’s Note: Community Literacies is a series about the Webmaker community’s finest teaching kits and learning resources around the world, and the user stories that bring them to life. Have something to share? Get in touch with @codekat.

Community-made curriculum, from Africa to India

In the last few issues of this series, we explored the most inspiring teaching materials that have come out of Maker Parties and other community gatherings around the world this summer. Most recently, we looked at curriculum made in Africa, the United Kingdom and the USA. And this time, we’re heading to the beautiful land of India!
We’ll start by looking at a Webmaker Club recipe made by a talented group of Mozillians in Hyderabad. We’ll fly to Sathyabama University to learn about a Webmaker Open Online Train the Trainer (WOOTT) activity, and we’ll learn how to create our own digital business cards in Bapatla. We’ll finish our time together by learning about a Net Neutrality for Newbies teaching kit built from an Indian perspective, and a fun train game accompanied by an even more fun card generator from New Delhi that anyone can use to learn HTML. Namaste! 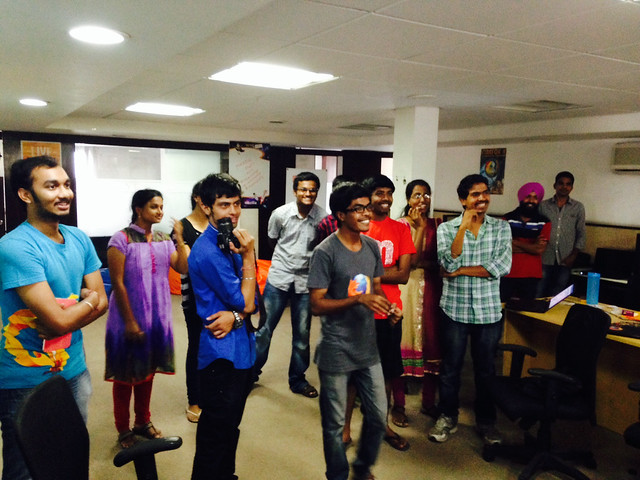 Recipe: How to build a community club, Hyderabad

In Hyderabad, engaging with “open” communities is all about sharing knowledge together, and the creators of the first Mozilla Club Hyderabad have worked this way from the very beginning. To date, the club has helped empower over 1,100 locals through web literacy, hosted more than 18 Maker Party events and published 500+ creations on Webmaker. To share a recipe for how to hatch a local Mozilla Club and then build its community, Sumanth Damarla along with fellow community leaders Vineel Reddy Pindi, Raghuram Korukonda, Santosh Viswanatham and Srikar Ananthula put together a specialized teaching kit to tell the story.
“We wanted this teaching kit to serve as a blueprint for others who wanted to organize events and clubs in their communities,” Sumanth explains. “We thought of it as a kind of map, or guide, to ease the work of future organizers and ensure their clubs are as successful as ours have been in Hyderabad.” When I ask how the kit-building process occurred, Sumanth has a smile on his face. “I was encouraged from the start,” he says, “and I had a lot of help from the community.”

And what does the kit-building process look like for this enthusiastic crew? “The Mozilla Club Hyderabad team collaborated and supported me from the start — kudos to them for being an awesome bunch of guys. And when the teaching kit was posted in our weekly community call’s Etherpad, the ideas poured in. @amirad remixed my Mozilla Community Tree, which I considered to be a big honour, @codekat retweeted it to her networks, other makes were remixed, and events were organized based on what the teaching kit had started. It was a very fulfilling experience to see so many people get involved around the world.”
I ask Sumanth whether he thought it might be easy for others to create similar teaching kits telling the story of their own Mozilla Clubs. “Creating your own kit is not a big deal,” he answers. “Anyone with basic HTML and CSS knowledge can try it, and anyone can remix to make something awesome!” Sumanth and his collaborators are overjoyed to see more members of the Hyderabad Community starting to create their own kits now, too — an illustration of exactly the kind of open knowledge-sharing they have championed from the beginning. 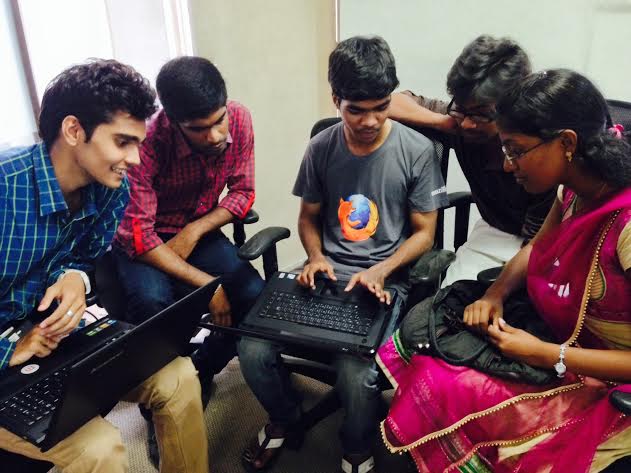 Despite strong community activity around webmaking across India, physical attendance is not always possible for everyone, especially when resources are scarce. To solve this dilemma, Shashank Gaikaiwari, Santosh Viswanatham and the Sathyabama Firefox Club had a brilliant idea. Together, they built curriculum for two different teaching kits that connect learners virtually, a Webmaker Open Online Train the Trainer (WOOTT) and an IRC Makerparty.
“A Webmaker Open Online Train the Trainer session is a lot like an online maker party,” Santosh describes. “In a WOOTT, the mode of communication just happens to be IRC and Etherpad instead of in-person facilitation. When a participant has trouble making something with Webmaker tools, mentors jump in to help them solve their issues, just like in-person. Participants are both mentors and contributors, and everyone has a lot of fun.”

The goal of online events like these, explains Santosh, has been to help people feel like they are attending events together even if the events aren’t possible in-person due to a lack of infrastructure and budget — a common issue in the region. The goal is to host even more sessions like these all over the globe for anyone who wants to learn how to use and create with Webmaker tools.
To achieve this, the Sathyabama Firefox Club would love collaborators from other regions who would like to help localize and remix the kits together and benefit people from other cultures and backgrounds. If interested, get in touch on Facebook or online. Making your first business card can be a tricky job — but how about a virtual business card? Webmaker Mentor and club lead of the Bapatla Engineering College Firefox Club Anand Varanasi had an idea about how to make this process easier — and a lot more fun. So he created his first-ever Webmaker project, a Make Your Own Business Card teaching activity and accompanying starter makes.

I ask Anand why he decided to make this activity and share it with the global community. “Well,” he explains, “what I really wanted for myself was a Thimble template that showed various options for business card designs. So I thought, why not make it into a teaching activity that anyone can remix to come up with their own designs, too?”
And how were these designs received by others? “After I completed the activity, I shared it on Twitter and on the Webmaker discussion list. I was very excited to see famous Mozillians like @openmatt, @thornet, @codekat and @colorwheelz appreciate it. And then people started remixing it themselves!” Anand would love to see more translations of the teaching activity into other languages, and he continues to look for feedback on how to make the templates even better. Net Neutrality remains an important topic of discussion across the web. The Webmaker team made a Net Neutrality teaching kit a few months ago with community partners in the USA and Canada to provide educators with activities to share the issues with learners, and Twitter has been buzzing with #netneutrality debates all over the world. In Chennai, Webmaker Super Mentors Achyuth K P and Shashank Gaikaiwari decided it was time to contribute to the dialogue from an Indian perspective. Together, they created the Net Neutrality Kit for Indian Newbies.
I got in touch with Achyuth to get more background on the kit’s creation. “I should point out,” he notes, “that as Indians we realized immediately that not many folks actually knew what Net Neutrality even was here. We only learned these things through our knowledge of Mozilla’s

mission. And that’s when it hit us — as supporters of web literacy in all its forms, it is really our duty to explain what Net Neutrality means in a simple way, especially for those who are completely new to it.” The kit has already made waves on social media, and it has been the center of lively discussions on the Webmaker list and Discourse, showing that the issue is an important one indeed for Indian communities.
How can others get involved in the next stages of the project? “We hope we have covered most of the explanations necessary for a newbie to understand the concepts and the issues faced by different countries,” says Achyuth, “but as it’s still quite Indian in its scope, we also want to be sure the ideas in this kit reach larger masses. We’d love to see it translated into local languages,, and also see others add more data about their own countries to the mix.” Our last feature regards a certain game about a certain transportation method, with a lot of fun thrown in — meet the Train Game by Tanay Pant, a Webmaker Supermentor from New Dehli.
“The purpose of the Train Game,” Tanay explains, “is to provide educators and mentors with a small activity to teach basic HTML tags through play. It’s meant to be very easy and also amusing, and it’s all open so learners can improve and build upon it!”
In an inspiring turn, Tanay supplemented his early work with the Train Game to make a teaching project with even greater code complexity: The Angular Card Generator. I asked Tanay what inspired him to do it. “I had started to contribute to the public Webmaker repository ‘webmaker-profile-2’,” Tanay answers, “and I found that the Javascript framework Angular.js was used there extensively. I was about to host my own Webmaker party, and had to demonstrate how to contribute code to Webmaker.

So I thought that a small introduction to Angular, with the help of a fun interactive make, would be an interesting way to provide motivation! And it proved to be a hit!”
Tanay describes the response to the Angular Card Generator as “overwhelming”, citing his surprise at how many people from around the world have already remixed it, filling in their credentials on the train and making it even more interactive. “I have even gotten pull requests from people on Github to improve the UI of the app using Bootstrap and CSS3 color gradients,” he adds, laughing. “I have been so happy to see this, especially from those who attended our learning events, because it means they had enough knowledge to go and implement things on their own!”
Tanay encourages interested collaborators to tweet @tanay1337 with feedback, remix the kit and add more enhancements on Github. And he gives special thanks to @k88hudson, @gesa and @galaxyk for encouraging him to make the activity in the first place.

A big thanks to our featured mentors

We end this issue with many e-hugs and excited bread loaf gifs for community leaders and mentors Sumanth Damarla, Vineel Reddy Pindi, Raghuram Korukonda, Santosh Viswanatham, Srikar Ananthula, Shashank Gaikaiwari, Anand Varanasi, Achyuth K P and Tanay Pant for sharing their truly inspiring educational creations from India with us all. We hope this issue has left you feeling inspired to remix, reflect and create your own! Have a great piece of content you want us to feature? Get in touch.