The Gigabit Community Fund project arrived in London for MozFest with a delegation of gig folks from our growing communities in Chattanooga and Kansas City, and even a US Ignite partner from Cleveland made the trip over.

“What happens when you bring together 1700 hackers, teachers, journalists, artists and other creative technologists for a weekend in a vast, ideas-filled space? The answer – in the best possible way – is chaos.
Chaos gets a bad rep. Mozilla Festival, now in its fifth year and affectionately known as MozFest, is unashamedly thrown together: sessions are spontaneous and guided by their participants; banners, posters and enormous flying blimps litter the corridors and teaching spaces; wild-eyed children run past armed with robots and LED boards; a life-sized Firefox mascot wanders around hugging excited festivalgoers.
All in all: MozFest is unlike any other event I’ve attended, except possibly a tech-themed Glastonbury: there’s far too much going on that you can’t possibly see all the stuff you’re interested in, but there’s so much going on around the fringes and in the spaces between “stages” that you’ll almost always end up discovering something brilliant. The coffee was absolutely fantastic, the enthusiasm and passion of the people running the show was infectious, and to boot: they gave out 1000 free Firefox OS smartphones (aimed at emerging markets) to nearly every attendee – with the request that we report bugs, put them through their paces and even create apps for them.”
–Matt Andrews, TheGuardian.com, Friday, October 31, 2014

From the start of MozFest, guests took to the sessions for inspiration to take back home.  From policy and advocacy to Hive Learning Networks, from the art and culture of the web to open science and open news showcases – MozFest is a consumable source of knowledge that feeds the globe a Thanksgiving size meal of information once a year.
We had some gigabit-inspired projects flanking the weekend-long event, starting with the Kansas City Public Library’s Digital Media Lab.  They showed off their high-tech virtual reality + Minecraft @MozillaGigabit project (Round 2 KC) at the MozFest Science Fair on Oct 24th at Ravensbourne College in London’s Greenwich area. 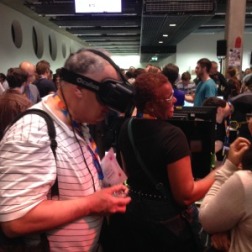 Adagio, a Round 1 Chattanooga @MozillaGigabit project is a collaborative, cloud-based music education app. and they joined MozFest to shine at the big Maker Party on Saturday, Oct 25th. 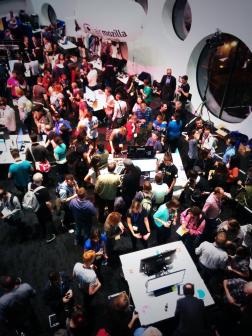 We convened an ad-hoc Gigabit session on Sunday, Oct 26th for the group to discuss broad community progress, national partners and resources, and the upcoming Gigabit City Summit in Kansas City January 13 -15, 2015.  We had the opportunity to reflect on ideas generated from MozFest, how to take new concepts back to our communities, how to track and monitor these and other, ongoing projects and pilots, and we spent a great deal of time organizing ways to further our capacity for working together to be more effective across our shared interests.
We discovered some new partners, found some new ways to further expand our work in our home communities, and we even found a couple of nuggets of gigabit inspiration worth pursuing.  Stay tuned…we’ll be sharing more of those outcomes as they rise up and take shape.
One thing is for sure – you’ll find a larger contingent of gigabit evangelists, stakeholders, leaders and practitioners at MozFest 2015.