Hi! I’m Marina Malone, and I’m a high school student from Chicago Public Schools. This post is about my experience with RideW/Me, which is an app that makes it easy for high school students to find educational opportunities in Chicago and get there safely. It’s produced by members of Mozilla’s Hive Chicago Learning Network, Mozilla staff, volunteer developers, and other interested community members just like me! 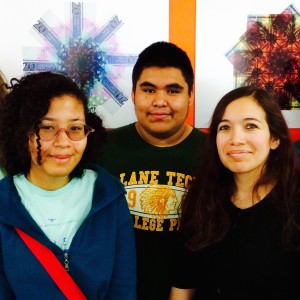 That’s me on the left with Esteban Martinez and Amaris Alanis-Ribiero.

It all started when my College First program manager at the Chicago Botanic Garden, Amaris, sent an email looking for students to help out with some app about transportation for teens. She was vague about exactly how we could help with something like app development and only said that we would be “working with tech experts,” which sounded intimidating. When I walked into TechNexus and into what turned out to be a civic hacking competition, I was right (but only at first). I was confronted by a bunch of old people – college students and guys with beards – writing on whiteboards and typing on keyboards. I had never been in such a board-centric room before and it made me wonder even more how I, a board-less high school student, could fit in an environment like this.

Fortunately, my friend Esteban also volunteered to help with the app and even though I still had no idea what the app specifically did, Esteban had arrived before me and caught me up. He told me that our job was to make the diagrams on one of the whiteboards pleasing to the eye using Google Slides; they were calling them storyboards, a rough draft of what the app would look like. The sloppiness of the storyboards on the whiteboard actually made them seem a lot friendlier. They were filled with phrases like “CoOL Urban Scene,” “Im In If Ur In” and other obvious attempts to appeal to teens. It made the team we were working with more relatable, rather than distant computer geniuses. But words like “My Events,” “Find Events,” and “Join Event” caught my eye. I thought this app was about transportation, so what was going on with these events? 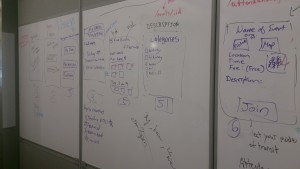 That’s where Robert Friedman, a Mozilla educator stepped in with another whiteboard. He explained that the app, called RideW/Me, would make it easier for teens to find educational events and get there safely with people they know. His explanation cleared up what the app was about, and I realized that it actually applied to me, my friends, and my school.
Chicago is a huge city, with a lot of educational opportunities that are often completely missed out on because nobody knows about them or it’s difficult to get to them. Understanding the goals of the work and how it was relevant to my personal experience gave me a reason to contribute as much as I could to this project… even if all I could do was make the diagrams on the whiteboard pleasing to the eye on Google Slides.

Turns out, making diagrams on whiteboards pleasing to the eye isn’t as simple as I thought it would be. Esteban and I were delving into the realm of graphic design for RideW/Me but it felt like we sort of hit a wall when we finished the basic storyboard in Google Slides. We could only do so much with simple rectangles and Google’s choices for the color green. That’s when Robert introduced us to Ricardo Vasquez, a User Experience and Interaction Designer at Mozilla to help us understand how designers think and work. Ricardo is a graphic designer and he happened to host a YouTube livestreaming series called “Hour of Design” where he walks viewers through his process of designing something for the web.
Ricardo wanted to dedicate an episode or two of his show to RideW/Me. To help him in his work, he asked Esteban and me to create a mood board. A mood board is an arrangement of pictures that’s used to demonstrate a certain style, and, in this case, we made them to represent the look and feel of the app. We made two: one a bit formal and mute, but the other gritty and loud. Now I was finally getting a hold of a board of my own!

On the livestreams, Amaris, Robert, Esteban, a bunch of my friends, and I watched Ricardo do his magic on YouTube and communicated with each other, remotely, through Slack, which is a collaboration tool that basically combines Twitter and Facebook. He created a style guide that provided choices for color palettes and font sets, and he taught us how certain colors and fonts were perceived by people. Instead of making one absolute choice of fonts and colors he made two or more for people to vote on. There was an incredibly heated battle on Slack about going blue and red or blue and yellow for the app. Personally, I was Team Ketchup, Team Mustard is lame! We actually polled a bunch of people about the color palette, and we found out that kids tend to like blue and red, while adults like blue and yellow. At the end of the day, we learned how important color choice and fonts are when it comes to connecting to our intended audience for the app.
At the end of August, I attended a Chicago Hack Night at Merchandise Mart, which was another environment filled with more whiteboards and keyboards. There were all sorts of people there like web designers, GIS experts, college students, community leaders, and even lawyers, and the main thing they had in common was that they were ready to collaborate with each other. I learned about Code Academy there, and through Code Academy, right now, I’m learning to use the command line. 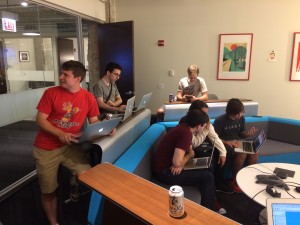 You really can’t work alone with a project like RideW/Me. A project made for a community is most successful when it’s made by the community. Input from a variety of people is key, and the Internet has made it so much easier for us to get connected, from little things like asking my friends which color looks great on green through Facebook, to awesome stuff like getting an actual graphic designer from Canada collaboratively making a style guide with us through YouTube and Slack. The web is a hub for collaboration, and it can be used to find people who genuinely want other people to succeed. The web really ‘does make things that feel so distant and unachievable, like high school students helping tech experts, feasible after all.
A few months ago, I was a student who was overwhelmed by how board-centric the RideW/Me project was, and now, I feel like I’ve got a lot under my belt when it comes to boards. I’ve worked with storyboards, created mood boards, and now I’m typing on the keyboard to learn how to code. All of this is because I’ve met great people in person, and through the Internet. I never thought I’d be able contribute much to the RideW/Me app, but I underestimated how much our community cares about youth. 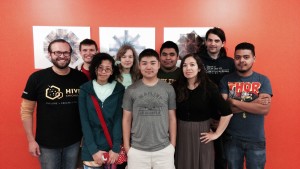 Whether it be tomorrow or in five years, you can find me writing on whiteboards building on RideW/Me or another community project. As a part of this great community, I want to be the best I can be to help others be the best that they can be. I’m currently involved in conservation biology at the Chicago Botanic Garden, and from my experience I have been inspired to improve the natural environment of my peers. I plan to apply what I learned from the Garden and with the RideW/Me project to improving the biodiversity of prairies in the United States.
Read more about RideW/Me in this post by Christopher Bohl, web developer and recent graduate of Dev Bootcamp Chicago.