For a long time now, I’ve been thinking about three big challenges in open science:

At some level, these are all the same problem: they are all endemic to a fragmented community. Taken all together, the scientific community has a huge amount of programming knowledge; but it’s split up across individuals that rarely have the opportunity to share that knowledge. Crippling self doubt often arises not from genuine inadequacy, but a loss of perspective that comes from working in isolation where it becomes possible to imagine that we are the worst of all our peers. And as we saw at the NCEAS event, the so-called discoverability problem evaporates very quickly with even a small group of people pooling their experience.

The skills & knowledge we need are there in pieces – we have to find a way to assemble them in a way that elevates us all. The Mozilla Science Lab thinks we can do this via a loose federation of Study Groups.

I started thinking about Study Groups last Autumn, after a conversation with Rachel Sanders (PyLadies San Fransisco); Sanders described regular small PyLadies meetups where learners would support each other as they explored a tutorial, project or idea, where emphasis was on communal, participatory learning, lecturing and leadership roles took a distant back seat, and learning occurred over the long term. By blending these ideas with something like a journal club familiar to many academics, I think we can build Study Groups that powerfully address the questions I started with. I’d like Study Groups to do a few things:

In practice, these things can be achieved by getting together in an open meetup anywhere from once a month to once a week, where individuals can lead follow-along demos, have a co-working space to explore and experiment together, and everyone feels comfortable asking the group for ideas and help.

A number of powerful examples of similar groups predate this project, and I had the good fortune to learn from them over the past several months. Noam Ross leads the Davis R User’s Group, a tremendously successful R meetup that has generated a wealth of teaching content on R over the past few years; Ross also organized a recent Ask Us Anything panel on the Mozilla Science Forum, and invited the leads from a number of different similar programs to sit in and share their stories and experiences. I met Rob Johnson and others behind Data Science Hobart while I was in Australia recently; DaSH is doing an amazing job of pulling in speakers and demo leaders from an eclectic range of disciplines and interests, to great effect. And I’ve recently had the privilege of sitting in on lessons from the UBC Earth & Ocean Science coding workout group, which informed my thinking around community-led demos on tools as they are actually used, such as Kathi Unglert‘s work on awk and Nancy Soontiens‘s basemap demo. 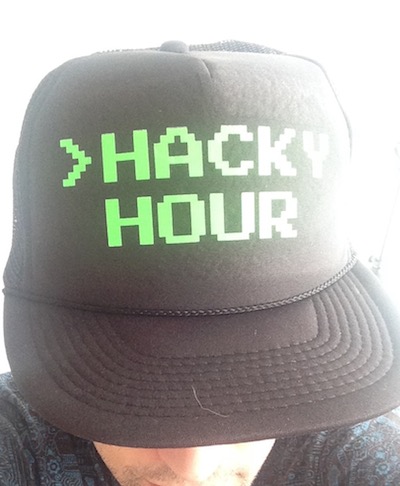 Hacky Hour is one of the many awesome ideas from the Research Bazaar.

From these examples and others, I and a team of people at UBC began discussing what a Study Group could look like. For the first few weeks, we met over beers at a university pub, in the Hacky Hour tradition started by our colleagues in Melbourne at the Research Bazaar. Enthusiasm was high – people were very keen to have a place to come and learn about coding in the lab, and find out what that would look like. Soon, with the help of many but particularly with the energetic leadership and community organizing of Amy Lee, we had booked our first event; Andrew MacDonald led a packed (and about 2/3 female) room through introductory R, and within 24 hours attendees had stepped up to volunteer to lead half a dozen further sessions on more advanced topics in R from their research.

There was no shortage of enthusiasm at UBC for the opportunities a Study Group presented, and I see no reason why UBC should be a unique case; the Mozilla Science Lab is prepared to help support and iterate on similar efforts where you are. All that’s required to start a Study Group at your home institution, is your leadership.

In order to support you as you start your own Study Group, the Mozilla Science Lab has a collection of tools for you:

We’re very much looking forward to working with you to help you spool up your own Study Group, and learn from your experiences on how to make this program what the research community needs it to be; we hope you’ll join us.