Note: There will be a Mozilla Science Lab meeting this Thursday, starting at 11 AM EDT.

Software Carpentry is pleased to announce the release of v2013.11 of the lesson materials repository. This release represents nearly 2 years of collaborative lesson development from 54 contributors, and features web-ready lessons for operating and automating with the command line, modular programming (with introductions to Python and R), personal and collaborative version control with Git, and unit testing. Contributors to this release include:

In the discussion on writing and publishing papers in a webby world, Stefan van der Walt linked to a paper-in-progress on GitHub. Check out the repositoryfor an example of how his paper (and the SciPy Proceedings) are authored, automated, and openly reviewed using ReStructured Text.

There have been 57 commits to the repository by 9 authors this week, with 1,013 new lines across 8 files. 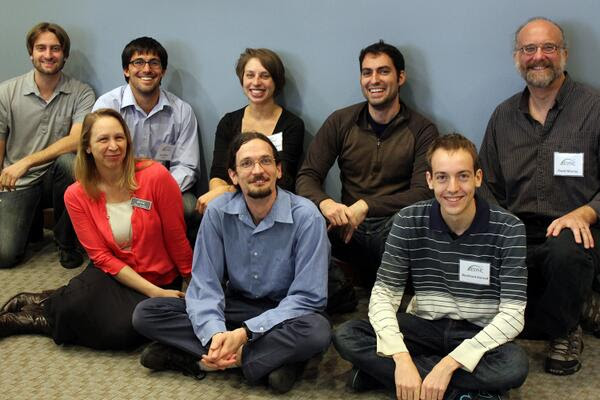 The second half of the University of Melbourne Software Carpentry Bootcamp, which featured four 3-hour sessions spread over two weeks, wrapped up this week as well. More details are available from the registration page and the course repository.

Aleksandra Pawlik posted an announcement about Software Carpentry events at the upcoming American Geophysical Fall Meeting in San Francisco this week. Four Software Sustainability Institute Fellows will be organizing a “Software and Research” Town Hall Session on Thursday, 12 December 2013, at 12:30 PM in Moscone West Room 2004. There will also be a number of other Software Carpentry-related sessions throughout the week, including a presentation on Software Carpentry by Aron Ahmadia Friday morning as part of a series on Open Source Tools and Techniques for Hydrology. Keep an eye on the @swcarpentry Twitter account for up-to-the-minute updates.

Finally, Martin Jones wrote a thought-provoking post about diving deeper into the technical details of programming as a follow-up to his Python for Biologists online book. Here are some of his thoughts:

So if you’re comfortable with the basics of programming—and maybe you’ve already written a fair few useful programs—I encourage you to seek out the corners of your programming language that you haven’t yet ventured into. With any luck, what you’ll find there is not just new features, but new ways of thinking.

See his post, Advanced Python for Biologists, for more!

How to Get Involved with Software Carpentry this Week

There are two discussion issues open in the repository. Please join in if you have thoughts or would like to participate in the discussion on:

Have a good week!