This is the first part of a blog post series that will allow you to understand how Firefox implements Web Security fundamentals, like the Same-Origin Policy. This first post of the series covers the architectural design, terminology, and introduces core interfaces that our implementation of the Same-Origin Policy relies on: nsIPrincipal and nsILoadinfo.

Whenever Firefox on Desktop or Android fetches a resource from the web, Firefox performs a variety of web security checks to ensure web pages can not harm end users by performing malicious actions. For example, when loading a sub-resource from a web page, Firefox ensures that its URL is not targeting the local file system with a file:// scheme. Before diving deeper into Firefox Security internals we have to introduce the term Security Principal, which is key for understanding how Firefox enforces web security checks.

The Security Contexts in Firefox

Whenever a page performs a request, Firefox internally creates an nsIChannel object (which acts as the transport algorithm, such as HTTP(S), WebSocket etc.). Amongst other things an nsIChannel consists of an nsIURI, which is the URI to be loaded, and an nsILoadInfo object. The latter holds all security relevant attributes including security flags indicating what security checks need to be performed and the aforementioned Principal. It is worth emphasizing that the loadinfo – including the Principal – gets frozen at creation time and remains attached to the nsIChannel instance even if the load encounters any kind of redirect, e.g. a 302. The last step before Firefox starts loading bits over the network is performing all relevant security checks within the function asyncOpen() of any nsIChannel implementation.

Taking the loadingPrincipal and the triggeringPrincipal into account, Firefox performs security checks in an asymmetric fashion. More precisely, a Principal may have access to another Principal but not necessarily vice versa. This is also why security checks are not implemented as equality checks. Instead, Firefox relies on the concept of ‘subsumes’. In more detail, Firefox uses aPrincipal->Subsumes(aOtherPrincipal), to see if aPrincipal has access to aOtherPrincipal.

The aforementioned System-Principal subsumes all other principals, but a Null-Principal basically fails all security checks and is only same-origin with itself. A Content-Principal is same- origin to another Content-Principal if scheme, host and port are the same for both. If so, Firefox allows the load.

An illustrative example of a Web Security Check

Let’s assume you visit the web page https://example.com and that page then loads library.js from https://foo.com. For the JavaScript load to occur Firefox will internally create an nsIChannel with the URL of https://foo.com/library.js. 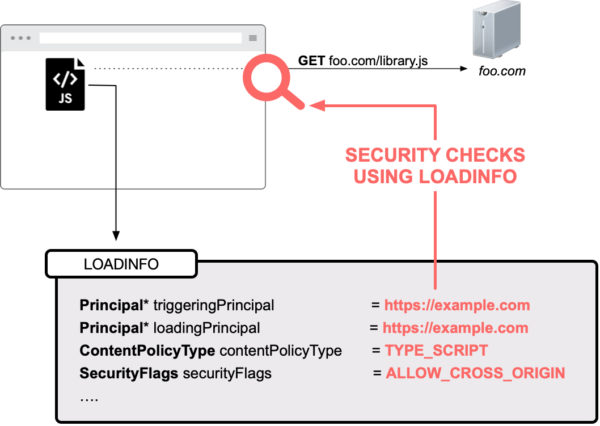 While in that particular case Firefox would allow the cross origin load, it would still ensure that the web page is not trying to access the local file system of the end user.

In this blog post, we explained how Firefox enforces Web Security checks, like the Same-Origin Policy. In the next post we’ll explain how to enable available logging mechanisms which allow for visual inspection of every web security check performed. We hope that this introduction will aid security research as well as bug bounty hunting and sparks your curiosity to go further, even contribute to Mozilla and the Open Web.

The Attack & Defense blog is targeted directly at security researchers who are interested in new developments in Mozilla’s Bug Bounty, and guides, tips, and tricks for finding bugs in Firefox.