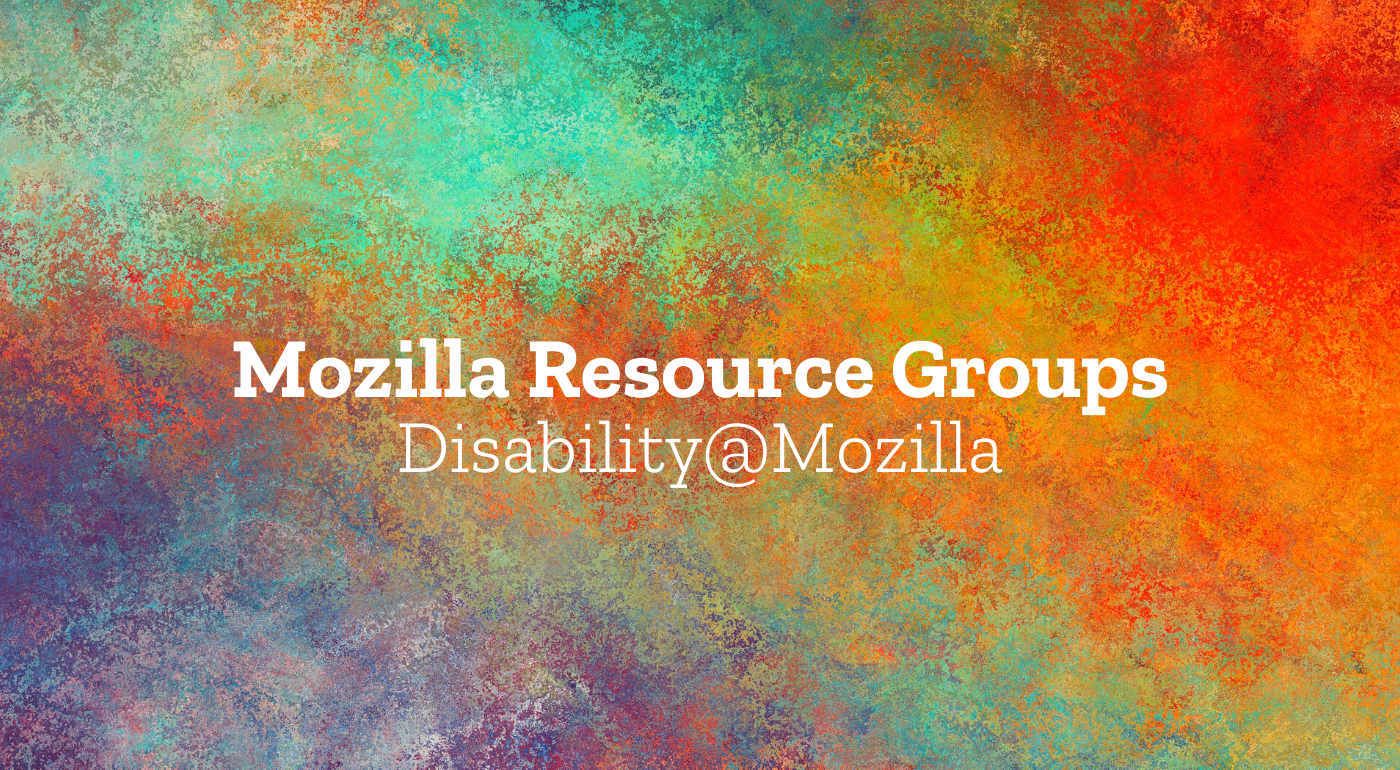 It’s our mission at Mozilla to build an internet that includes everyone, regardless of demographics and opportunities, and we’re building our team the same way. We believe our growing list of Mozilla Resource Groups (MRGs) — Afrozillians, Disability@Mozilla, Latin Pride, Mozilla API, Pridezilla, and Women of Mozilla — are critical to our success.

We also believe that the best way to understand these groups is through the people in them. Below, Kim Bryant, Head of Operations for Mozilla Rally, explains how and why she recently co-founded the group with Hillary Juma, Community Manager for Common Voice, and what they and their fellow members have in store for the months and years ahead.

What is the origin story of Disability@Mozilla?

I coincidentally expressed interest in an MRG for people with disabilities a few weeks before my brilliant co-founder, Hillary Juma, did the same. I asked in Mozilla’s Diversity Slack channel whether one existed, and someone from the Diversity & Inclusion team immediately reached out to ask how they could help. Then they connected me with Hillary, and then Kelsey Carson from the D&I team helped us set up and run a formal working group, which is when Jamie Teh, Tech Lead for Mozilla’s Accessibility team, joined us. 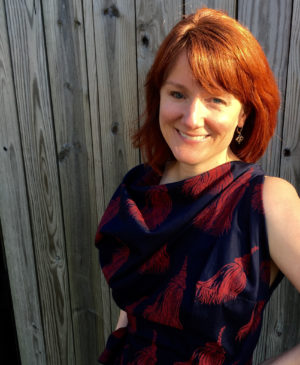 Kelsey encouraged us to start by writing a charter, and I learned so much from that process. Our experiences — including where we live — fed into the language we chose; different cultures think about disability in radically different ways. One value we included is that ableism is unacceptable and will not be tolerated. But it’s immediately followed by another value: We make space for growth, and we expect to make, and learn from, mistakes. Anyone may become a person with a disability in their lifetime, so we also wrote it into our charter that we are “wildly, determinedly intersectional,” which for me has roots in the U.S. disability civil rights movement.

For example, the Black Panthers provided meals at the 1977 San Francisco 504 sit-in because protestors Brad Lomax and Chuck Jackson were Black Panthers themselves and asked for help. Disability@Mozilla members have already created other definitions of “intersectional,” including the fact that you don’t have to be out as a person with a disability, or conform to any particular criteria or label to join us. We’ll continue to iterate on the charter, and I’m excited about that because it means we’re learning and growing.

Tell us what the MRG has been up to so far.

Hillary came up with our MRG’s name just in time for our public launch last October, which is National Disability Employment Awareness Month in the U.S. and ADHD Awareness Month worldwide. We’ve started a Slack channel for Mozillians with disabilities and caregivers, and we’ve started posting some documents and educational resources on Mozilla’s wiki — things like Stella Young’s TED Talk where she coined the phrase “inspiration porn,” and the new autobiography from the disability activist Judith Heumann. We’ve also shared our vision statement, which is that “It’s safe for Mozillians with disabilities to share their disability at work and be seen and treated as whole people,” and we put out a call for ideas about which projects we should work on next.

My research for company-wide Slack channel posts has been an unexpected source of personal energy and learning, like this terrific quote from an interview with the Deafblind human rights lawyer Haben Girma that I included in a celebration of the UN International Day of Persons with Disabilities: “A lot of disabled people are called ‘inspiring’ by people using the word as a mask for pity. If you feel inspired, ask yourself what you feel inspired to do.”

Why was it important to you to start this group?

It’s important for so many reasons, but the initial catalyst was last summer, a few months after I joined Mozilla. I’ve been partially sighted since birth, but I had never been out about that professionally. It didn’t feel safe to be. When you grow up seeing things like the Jerry Lewis MDA telethon, well-intentioned as it is, it creates a stigma that discourages you from talking about disability. I’ve had to ask for accommodations at work a few times, but I always did it in a roundabout way.

But then in June I had a horrible eye infection. For the first time in my life I truly couldn’t see if I used electronic screens more than 2 or 3 hours a day, and I had to ask for help. Luckily, I had a fantastic boss, Rebecca Weiss, who made it safe for me to share. Instead of telling me what Mozilla could do, she asked, “What do you need?” We came up with a plan together, and the whole Rally team was so supportive. I was able to keep being creative and work full time while I was recovering.

That was such an amazing experience, and I thought, “I know I’m not the only person who’s trying to navigate this stuff.” And even beyond Mozilla — culturally, there’s been a shift over the past 5 or 10 years that has made it feel safer to come forward. The way people think about disability is starting to change; for a lot of younger millennials and Gen Z, it’s completely normal to talk about these things. But it was only last year that I learned about the social model of disability versus the medical model — and I realized how much of my life had been framed by the idea that there was something wrong with me that needed to be fixed, rather than that society needs to level the playing field so that everyone has the same access and the same opportunity to do their best work. It seemed like Mozilla was an environment that would welcome, and benefit from, having a group like ours. So that’s when I reached out — and also when I became officially out, professionally, as a person with a disability.

How would you describe Mozilla’s current moment in terms of D&I?

A lot of companies have good intentions but no follow-through. Here, I’m seeing follow-through all over the place. It’s really encouraging. When I started working in tech in the late ’90s in the Southeast U.S., I was frequently the only woman in the room — and gender was the most you could talk about in terms of differences. Years later, I did have one other boss I had to tell about my disability, and he was fantastic and supportive. But culturally, even then it was nothing like it is today. At Mozilla, though, I got the sense right away that Rebecca’s approach to my situation was just how the company operates. Several other MRGs were already up and running before I arrived, and the amount of programming around D&I is inspiring.

Part of that is the way equity and inclusivity are embedded in our day-to-day work; making the internet accessible to all is literally part of Mozilla’s mission. So while I do feel like my work on Rally comes first relative to the MRG, they inform each other. It’s the Rally team’s job to help people understand what data is being collected about them and how it’s being used, which is one of many areas where people in marginalized communities are disproportionately negatively affected. So the more diverse the Rally team is, the more we can tap into those communities, and that will make our product better.

What are your goals for Disability@Mozilla going forward?

Events-wise, we have Disability Pride Month in July. I aspire to the level of programming Pridezilla did for their Pride month this past June, and I think we can do it. The members of our other MRGs have been so welcoming; it’s a very intersectional community, so you feel like you’re joining more than just your group. I’d love to help pay that forward, and it’s motivating to see what they’ve already done. They make me think bigger.

I’m also looking forward to bringing in more members and seeing Disability@Mozilla grow. There have been great conversations in our Slack channel, and at some point we hope to launch a channel we can share with our allies, too. There is so much joy in our group already — it’s very much counter to the narrative that having a disability is a sad, terrible thing. Really, we’re humans like anyone else, and we just want everyone to have a shot at doing their best work.