It’s been a good month or more since we started the current round of
chasing space problems in Firefox.  Considerable effort has gone into
identifying and fixing memory hogs.  Although the individual fixes are
often excellent, I’ve haven’t had the big picture on how we’re doing.
So today I did some 3 way profiling, comparing

These are release builds on x86_64 linux, using jemalloc, as that’s
presumably the least fragmentful allocator we have.

Each run loads 20 cad-comic.com tabs.  I let the browser run through
60 billion machine instructions, then stopped it.  By
around 40 billion instructions it has loaded the tabs completely, and
the last 20 billion are essentially idling, intended to give an
identifiable steady-state plateau.  That plateau ought to indicate the
minimum achievable residency, after the cycle collector, JS garbage
collector, the method jit code thrower-awayer, the image discarder,
and any other such things, have done their thing.  I regard the
plateau as more indicative of the behaviour of the browser during a
long run, than I do the peak.

I profiled using Valgrind’s Massif profiler, using the –pages-as-heap
option.  This measures all mapped pages in the process, and so
includes C++ heap, other mmap’d space, code, data and bss segments —
everything.

Consequently a lot of the measured space is the constant overhead of
the text, data and bss segments of the many shared objects involved.
That cost is the same regardless of the browser’s workload.  To
quantify it, I did a fourth profile run, loading a single blank page.
This gives me a way to compute the incremental cost for each
cad-comic.com tab.

The summary results of all this are (all numbers are MBs)

So we’re made considerable improvements since November.  But we’re
still worse than 1.9.2.  Nick Nethercote tells me that bug 623428 should
bring further improvements when it lands.

Here are the top-level visualisations for the three profiles.

Firstly, 1.9.2 (picture below).  What surprised me is the massive peak
of around 1.6GB during page load.  Once that’s done, it falls back to a
series of modest trough-peak variations.  I took the steady-state
measurement above at the lowest trough, around 54 billion instructions
on the horizontal axis.

Also interesting is that steady-state is reached before 25 billion
instructions.  The M-C runs below took longer to get there. 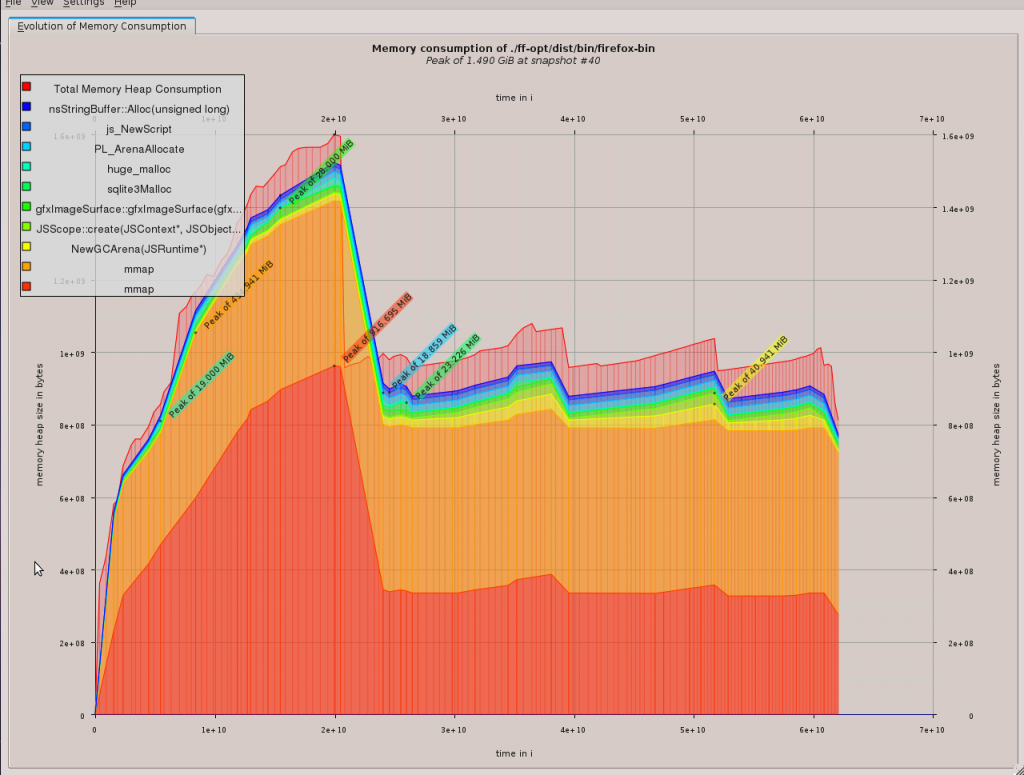 The M-C Nov10 picture (below) is less dramatic.  It lacks the 1.6GB peak,
instead climbing to pretty much the final level of around 1.2GB and
staying there, with a slight decline into steady-state at around 44
billion insns. 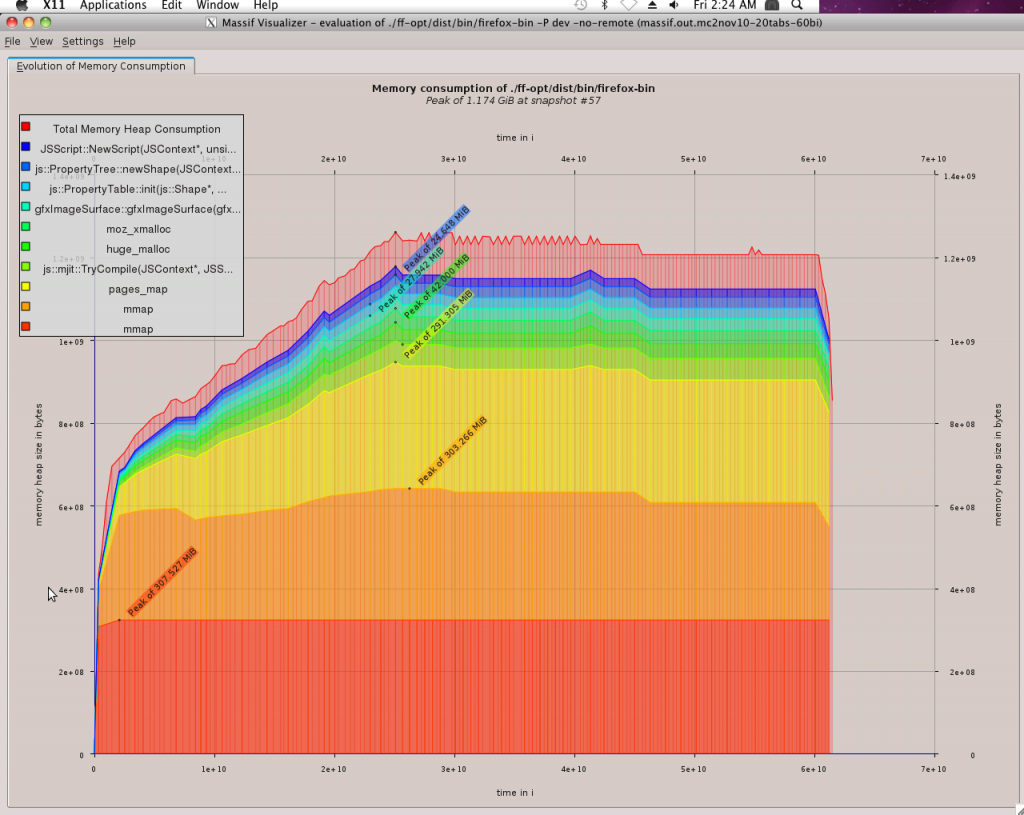 The M-C-of-now picture (below) is similar, although steady state
is less steady, and somewhat lower, reflecting the fixes of the past
few weeks. Observe how the orange band steps down slightly in
three stages after about 24 billion instructions.  I believe that’s Brian
Hackett’s code discard patch, bug 617656.  Also, note the gradual
slope up from around 38 billion to 53 billion insns.  That might be
the excessively-infrequent GC problem investigated in bug 619822.

So what’s with the 1.6GB peak for 1.9.2 ?  It gives the interesting
effect that, although M-C is worse in steady state than 1.9.2, M-C
has more modest peak requirements, at least for this test case.

On investigation, what 1.9.2 seems to be spiked by is thread stacks.
The implication is that it has more simultaneously live threads than
M-C.  Why this should be, I don’t know.  I did however notice that
1.9.2 seems to load all 20 tabs at the same time, whereas M-C appears
to pull them in in smaller groups.  Related?  I don’t know. 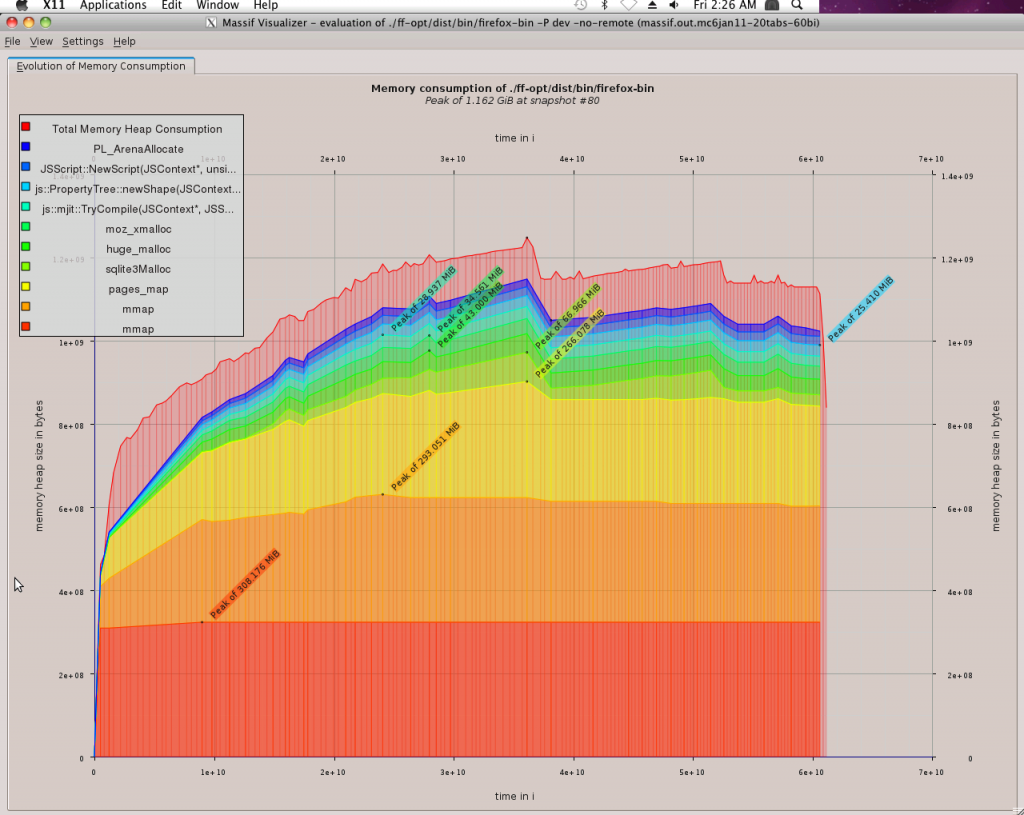