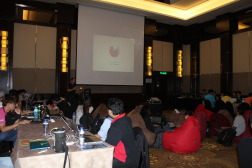 Mozilla has been involved in HITB for several years now, and this year‘s HackWEEKDAY contest was probably the best we’ve seen so far. HackWEEKDAY is a contest where contestants develop mobile apps (Firefox OS or any other platforms allowed) in a bid to win glory and prizes. The competition was fierce this year, with over 75 developers and 4 hours of judging! 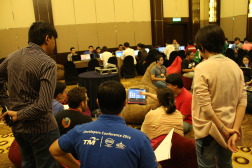 Notable entries included a Firefox extension which used Snort rules to block browser exploit attempts, a heat-activated mobile app to advise restaurant customers when the chef was cooking, and whole range of lock-screen apps –  from Morse code to facial recognition.

Mozilla also ran a booth promoting Firefox OS & WebMaker projects and the turnout was very encouraging. There was plenty of interest in Firefox OS phones, and thanks to the ground work from local community we had a constant stream of web maker experiments completed throughout the course of the conference (in exchange for T-shirts and goodies, of course!) 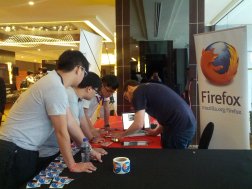 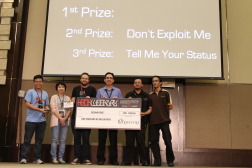 Big thanks to the Mozilla Malaysia community – Syafiq, Nasrun, Neo, Shah – among others for helping to make this a wonderful success, and being such gracious hosts (cendol durian, yum!) It’s sad that it‘s the end an era for HITB KL, but looking forward to continue being a part of HITB Netherlands, and their new GSEC format events.
Paul and Gary, Mozilla Security Team