After the release of Firefox 65 in December, we detected a significant increase in a certain type of TLS error that is often triggered by the interaction of antivirus software with the browser. Today, we are announcing the results of our work to eliminate most of these issues, and explaining how we have done so without compromising security.

On Windows, about 60% of Firefox users run antivirus software and most of them have HTTPS scanning features enabled by default. Moreover, CloudFlare publishes statistics showing that a significant portion of TLS browser traffic is intercepted. In order to inspect the contents of encrypted HTTPS connections to websites, the antivirus software intercepts the data before it reaches the browser. TLS is designed to prevent this through the use of certificates issued by trusted Certificate Authorities (CAs). Because of this, Firefox will display an error when TLS connections are intercepted unless the antivirus software anticipates this problem.

Firefox is different than a number of other browsers in that we maintain our own list of trusted CAs, called a root store. In the past we’ve explained how this improves Firefox security. Other browsers often choose to rely on the root store provided by the operating system (OS) (e.g. Windows). This means that antivirus software has to properly reconfigure Firefox in addition to the OS, and if that fails for some reason, Firefox won’t be able to connect to any websites over HTTPS, even when other browsers on the same computer can.

The interception of TLS connections has historically been referred to as a “man-in-the-middle”, or MITM. We’ve developed a mechanism to detect when a Firefox error is caused by a MITM. We also have a mechanism in place that often fixes the problems. The “enterprise roots” preference, when enabled, causes Firefox to import any root CAs that have been added to the OS by the user, an administrator, or a program that has been installed on the computer. This option is available on Windows and MacOS.

We considered adding a “Fix it” button to MITM error pages (see example below) that would allow users to easily enable the “enterprise roots” preference when the error is displayed. However, we realized that this was something we want users to do rather than an “override” button that allows a user to bypass an error at their own risk. 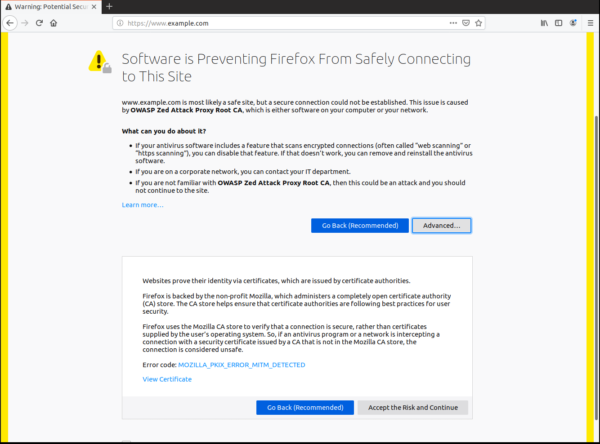 Example of a MitM Error Page in Firefox

Beginning with Firefox 68, whenever a MITM error is detected, Firefox will automatically turn on the “enterprise roots” preference and retry the connection. If it fixes the problem, then the “enterprise roots” preference will remain enabled (unless the user manually sets the “security.enterprise_roots.enabled” preference to false). We’ve tested this change to ensure that it doesn’t create new problems. We are also recommending as a best practice that antivirus vendors enable this preference (by modifying prefs.js) instead of adding their root CA to the Firefox root store. We believe that these actions combined will greatly reduce the issues encountered by Firefox users.

In addition, in Firefox ESR 68, the “enterprise roots” preference will be enabled by default. Because extended support releases are often used in enterprise settings where there is a need for Firefox to recognize the organization’s own internal CA, this change will streamline the process of deploying Firefox for administrators.

Finally, we’ve added an indicator that allows the user to determine when a website is relying on an imported root CA certificate. This notification is on the site information panel accessed by clicking the lock icon in the URL bar.

It might cause some concern for Firefox to automatically trust CAs that haven’t been audited and gone through the rigorous Mozilla process. However, any user or program that has the ability to add a CA to the OS almost certainly also has the ability to add that same CA directly to the Firefox root store. Also, because we only import CAs that are not included with the OS, Mozilla maintains our ability to set and enforce the highest standards in the industry on publicly-trusted CAs that Firefox supports by default. In short, the changes we’re making meet the goal of making Firefox easier to use without sacrificing security.