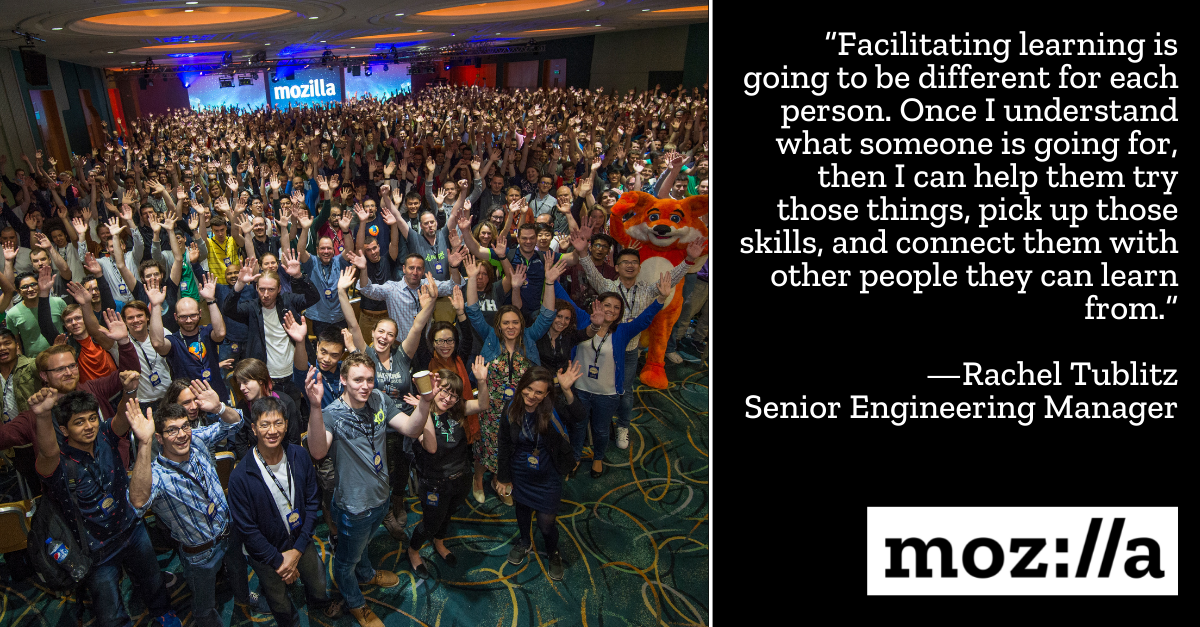 What does it look like to develop new skills or chart a new path at Mozilla? The answer depends on each Mozillian and their individual goals. Below, four team members share their stories of taking on new challenges—from how they found opportunities in the first place to the support they received in order to climb their learning curves—and explain how they help colleagues do the same.

When Mozillian Amy Tsay was first approached about a new role as Director of Engineering for Contextual Services, she was excited about the possibility—but she also had some concerns. Before joining the company nearly a decade earlier, she’d overseen technical teams in marketing jobs, and even learned enough JavaScript and HTML to build her own side business creating websites. At Mozilla, her first role as a community manager led to several positions in product management, most recently as a senior manager for Firefox Add-ons. But for all of her experience working with engineers, she had never been one herself.

“I didn’t have a career in engineering or come from that background, and I wanted to be sure I understood what that might mean for me, coming in as a director,” she says.

Two conversations helped set Amy’s mind at ease. One colleague reminded her that the job she was considering was more about people than technology; her responsibility would be keeping the team healthy and making sure they had the support, clarity, and resources they needed to deliver user value. Then, with another Mozillian, she talked about the fact that even people with technical backgrounds frequently have learning curves to climb—when they start working in a new language, for example, or a new domain. “That helped me remember that it wasn’t about what I already knew, but about my capacity to learn,” Amy says.

For Senior Engineering Manager Rachel Tublitz, a similar conversation helped convince her to join Mozilla in the first place. “I’d been an engineering manager before, but the role I was interviewing for was in an area that was out of my wheelhouse,” she remembers. “When I talked with the person who became my boss, I flagged that, and she essentially said, ‘You have the basics. You’ll figure it out.’”

That, Rachel says, is exactly what happened. “The team put together a great onboarding guide for me, which was super helpful. It was just known and accepted that I came in with both a lot of skills and a lot to learn.” After a year and a half managing teams that worked on Firefox services, including the Installer,  the Updater, Sync, and Push, she recently moved into a new role—leading Amy’s former team in add-ons, while Amy now leads part of Rachel’s.

“We both inherited great teams, and they’ve been incredibly supportive,” Rachel says. “We’ve also gotten a lot of support from each other.”

At Mozilla, opportunities to try something new arise in a wide range of ways. With Amy, for example, the company wanted to create a position to help explore possibilities for a new revenue stream, and her experience in add-ons lent itself to the role.

“Sometimes you’re assigned to something; sometimes you get pulled into another person’s interesting idea; sometimes you generate your own idea and sell it up the chain,” says Javaun Moradi, a Senior Manager of Product currently working on Rally, a new community data-sharing platform. In seven years at Mozilla, he has worked as both an individual contributor and a manager in the Firefox organization. The common thread, he says, has been “weird, messy problems,” ranging from launching DRM to developing tracking protection, search work to joint ventures with startups—but the paths to new projects have varied. Rally, for instance, was an idea from Director of Data Science Rebecca Weiss, and something Javaun himself had long been passionate about. “When she went for it, I said, ‘I want to be in on this.’”

When Head of Mobile John Cook joined Mozilla in 2019, he, too, knew his role could change over time. But he didn’t expect it to happen within weeks. A specialist in innovation and disruptive technologies and a veteran of companies including Apple, HP, and Norton, John wanted to join a team that “puts the user, not shareholders, front and center. I felt like it was something of a calling,” he remembers.

Initially, he focused on improvements in product management, working primarily with Mozilla’s small-but-mighty Mobile team. But after little more than a month, a reorganization prompted the formation of a new mobile business unit—with John as Director of Product. A year and a half later, he moved into the Head of Mobile role, and he now oversees Product, Engineering, Business, and Growth teams across both iOS and Android Firefox browsers.

“A big reason I was able to make that transition is that the people on our team were also growing their own careers,” he says. To create opportunities, he leaned on a piece of advice from a mentor he’d had early in his own career: “She reminded me not to forget someone’s resumé after they’re hired,” he recalls. “One of our product managers had a lot of past experience leading big crossteam initiatives; our engineering program manager had expertise in partnerships. Digging into people’s backgrounds can be a great way to expand their roles.”

As Javaun notes, an expanded role doesn’t always mean management. “People have different career goals, and we try to match opportunities to the contribution they want to make,” he says. “Some really do want to be managers; others want to become experts on the individual contributor track. They are different skill sets, and we want to cultivate—and offer a structured path for—both.”

He also notes that goals can and do change over time: “I’m a parent. I was on one trajectory, and then I wanted to be on another one, so I could spend more time at home.”

And it’s not just individuals making changes, Javaun says—as people expand their career goals, Mozilla expands, too. “The idea is not just to give people career tracks,” says Javaun. “You actually have to make space for them to do their best work, and know that it could alter the way that you build your products and services. I’ve seen it happen—on product teams, UX teams—we’ve adapted and grown because of what people brought to the table.

But regardless of the role, or the path taken to get there, Javaun says projects at Mozilla have had some key things in common. “You get to work with smart, driven people who don’t want to work anywhere else, and you get to do things no other company gets to do,” he says. “We’re often swimming upstream against big, entrenched interests. But we’re trying anyway, and there are ways we can win. That’s addictive.”

Rachel says the help she’s received from Amy and her teammates since moving into her new role is the norm at Mozilla. “People shifting positions and learning new things is pretty common here, and I think that’s helped build a supportive culture,” she says.

For Amy, that culture starts with creating space for people to ask questions—something she’s felt since her earliest days on the team. “A few months after I started as a community manager, most of the team shifted to another project. I had to learn a lot about the operations, product, and engineering aspects of the ecosystem I supported because the team became much smaller, but I never felt judged when I asked questions.”

Even in a relatively senior role, John says, “There is a lot of going to your peers. Javaun was one of the people taking my calls when I first joined, helping me navigate. I’ve been in the industry for a while, but Mozilla is unlike any other place I’ve been—you really can reach out to anybody to learn about what they’re working on or just have a conversation.”

Because learning is “not only tolerated but encouraged,” John says, team members sometimes find themselves in the spotlight more quickly than they expect. “Even if you’re brand new in the company,” he says, “you might be sitting in a meeting with our senior vice president.”

Of course, balance is required to navigate such “trials by fire” effectively. “If someone has everything figured out they’ll be bored, but you also don’t want to throw them in over their head,” Javaun says. “I think ideally, they’ll be at about 70% or 80%—struggling a bit, but not drowning.”

To that end, programs are taking shape to help Mozillians develop their skills and careers. In addition to formal offerings like a learning budget to pay for books, conferences, and even coaching, leaders like John are thinking about more structured ways to help team members explore potential paths. “We’re experimenting with carving out time for someone to sit in and get assignments in different areas, so they can test the waters and see what it might be like to make a career change,” he says. “When you’re a lean organization, it can be difficult to have someone spending time away from your team—or to be the other manager who’s spending time to train them. The key is to work together, so we can do what’s best for the employee and for Mozilla.” 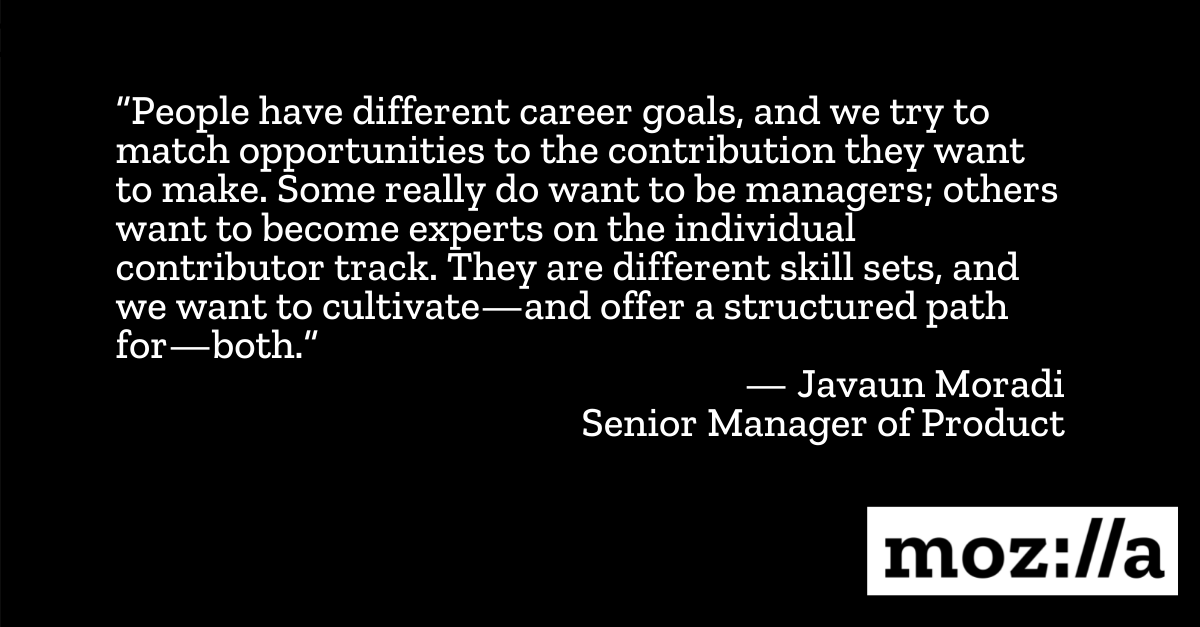 As she settles into her new role, Rachel recognizes that doing what’s best for each of her team members requires truly getting to know them as individuals. “Facilitating learning is going to be different for each person,” she says. “Once I understand what someone is going for, then I can help them try those things, pick up those skills, and connect them with other people they can learn from.”

For Amy, setting an example has been helpful, as well. “I try to normalize learning by talking about what I’m learning myself,” she says. “I’ve been beefing up my knowledge of services engineering, for example, and several people on my team are beefing up their knowledge of Rust. We talk openly about the books we’re reading and the things we’re learning.”

As John notes, growth is a two-way street: “Your manager should be helping you get where you want to go, but you’re in charge of your career. You really need to have those discussions, so you can be ready when opportunities come up.” Mozillians can also reach out to other mentors and peers for support, and it even happens between entire teams: “Right now in Mobile, we’re learning a new tool that’s been up and running on the Desktop side for a while, and they’ve been supporting our first experiment,” John says. “It’s not in their job description to help us be successful, but we’re all in this together.”

Rachel, too, has benefited from cross-team support—including via a working group that helps managers share knowledge and techniques for things like having difficult conversations and supporting team members during periods of change. When the founder of the group left Mozilla, Rachel took over. Amy, likewise, has paid forward the support she received as a new Mozillian, by working to make the company more inclusive to volunteers who, like her, don’t have engineering backgrounds.

And with each new opportunity created, Javaun says, the company itself will grow. “We want to retain all the beautiful, renegade parts that make us Mozilla,” he says. “When we adapt our processes and operations and culture to accommodate skill sets that are pushing the industry forward, we unlock a lot of possibilities.”