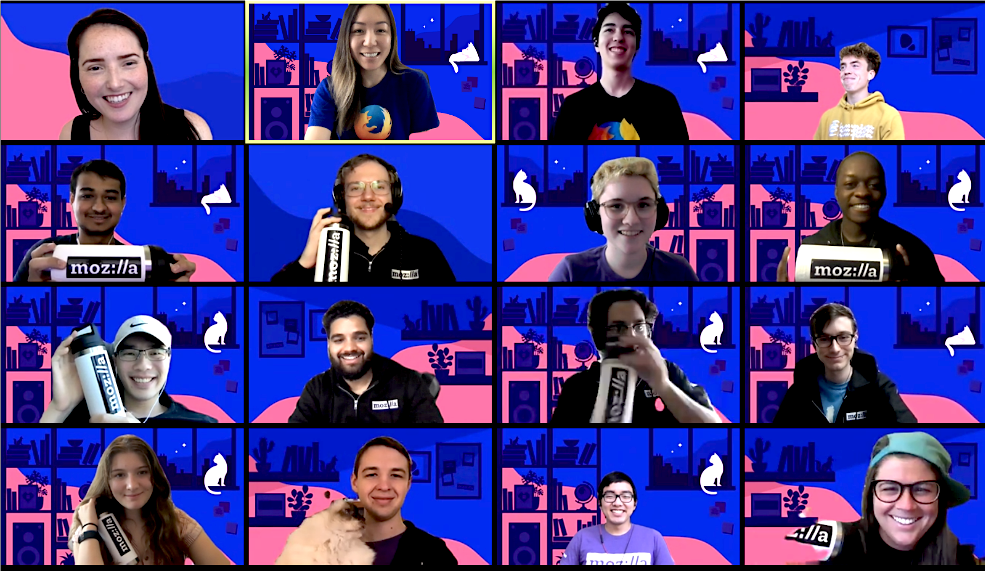 In late 2019, Tarik Eshaq accepted a software engineering internship at Mozilla for the summer of 2020—and immediately started counting the days until May.

“I was super excited. Mozilla just felt like the perfect place for me,” the University of British Columbia junior remembers. He was eager to work on Firefox’s Rust components as part of the Firefox Sync team, and he liked that Mozilla was a mission-driven company working to make the internet safer. “I grew up in Yemen and moved to Canada as a refugee, so I was looking for a way to give back to the global community,” he explains.

But a few months later, in early March, Tarik was wondering if the internship would happen at all. The first cases of COVID-19 had just been reported in both the U.S. and Canada, and the outbreak’s economic impact was starting to become clear. “People were saying that internships are usually the first thing to go, and that was a big fear for me,” he says. “Not only would I have missed out on working for Mozilla, I would have lost several months of work that I needed to help pay for school.”

Three thousand miles away on the campus of Princeton University, Ph.D. candidate Austin Hounsel was in a similar boat. Austin had interned at Mozilla for the first time during the summer of 2019, helping deploy the DNS-over-HTTPS protocol in Firefox, and had been quickly invited back for 2020. This time, he planned to spend the summer doing research on ways to improve the protocol’s performance.

“It couldn’t have been more aligned with the work I do as a student, and I’d had a great time at Mozilla the previous year. So I was really looking forward to it,” Austin says. But he knew circumstances were rapidly transforming for companies and schools across the country. On March 11, Princeton had become one of the first universities in the U.S. to send undergraduate students home for the semester. “It was clear everything was about to change.”

Within a week, though, Tarik and Austin would discover that they didn’t need to worry. The Mozillians overseeing the internship program—led by Frances Tam, who’s supported by Abagail Duckham and Alana Sungar—were already hard at work from their homes, figuring out how to make all 21 summer internships fully remote.

“Honestly, we weren’t sure it was even possible at first,” Frances remembers. Mozilla interns had always worked on-site. But she and her teammates also had an advantage: Remote collaboration was already part of Mozilla’s DNA, with nearly half the company working remotely even before the pandemic struck. “Because we were already so distributed, transitioning interns’ day-to-day work was actually relatively easy.”

The far bigger challenge, though, would be recreating the social and cultural aspects of a traditional Mozilla internship—and building a sense of community. In a two-day sprint during the second week of March, the University Relations team designed virtual versions of every facet of the in-person program, from executive talks to game nights, and developed new events like fireside chats with Mozilla employees who’d converted from internships to full-time roles. To help interns get to know each other, they brainstormed virtual, Mozilla-themed scavenger hunts and a “meet and treat” series where each intern would get a DoorDash gift card to purchase a “treat” to bring as they introduce themselves. And to make the summer at home easier for the students, many of whom had no prior experience with remote work, the team tapped some of Mozilla’s expert “remotees” to share best practices and tips.

By Friday, March 20, Frances and her teammates had an entirely remote program in place—a feat that, according to Ivy Research Council, 96% of tech companies wouldn’t manage until April or even later. The following week, as shelter-in-place orders rolled out in San Francisco, then the rest of the Bay Area and eventually the entire state of California, the team shared their plans with managers, mentors, and the steering committee, and then started setting up Zoom calls with each individual intern to deliver the news. “We wanted to speak with them one-on-one, not only to share with them that the program was going remote, but to check in on how they were doing, and to answer any questions.”

“The timing was perfect,” Tarik says. “I think Mozilla let us know what was happening earlier than anyone else. Even among my classmates whose internships weren’t cancelled, some didn’t get any news until two weeks before they were supposed to start.”

Austin, too, was relieved to hear the program was still on—and especially touched that Mozilla had decided to preserve a planned housing stipend for each intern, to help them adjust their relocation plans and purchase work-from-home equipment. Not only that, the company also provided all Mozillians with a COVID-19 assistance stipend to spend on anything from food to a charitable donation. “They wanted to make sure we were all still supported, no matter what our situation was,” he says. “I think that speaks to how much they care about Mozillians, interns included.” 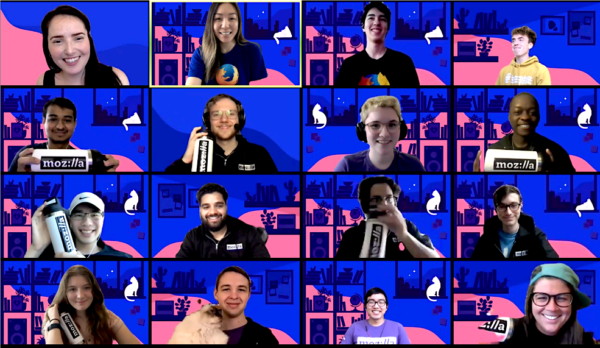 As Tarik, Austin, and their fellow interns prepared for the “new normal” of the summer ahead, their managers and teammates at Mozilla got ready to do their part as well—with a little help from Frances and the University Team. “Most managers weren’t worried; they said, ‘No problem, we’ve always had team members who are remote.’ But we wanted to provide helpful resources, so we created templates and checklists for remote onboarding—especially for the managers and mentors who’d be managing interns for the first time,” she says.

Tarik had never worked remotely before, but the first week was enough to set his mind at ease. “On day one, my mentor reached out as soon as intern orientation was over, and we had an hour-long one-on-one. Then I sat in on a team meeting, my manager introduced me to everyone, and I started scheduling one-on-ones with each of them,” he says. “I have things to work on; we’ve been in constant communication through Slack and video calls. Honestly, it’s been pretty incredible so far.”

The transition to working from home has been relatively smooth for Austin, too. While he and his manager both worked on-site in Mountain View the previous summer, the rest of their team had always been distributed. He does miss seeing his fellow interns in person—he lived with three of them during his first summer at Mozilla and quickly developed friendships with the entire group—but he’s been comforted to see the thoughtful efforts by Frances and her teammates to encourage those relationships from afar. “They’re doing a whole host of things to help us stay in touch, and a lot of the same events we did last summer are happening over Zoom,” he says. “It can’t completely replace being in person, but I don’t know how else you could do it—and of course I’d much rather we all stay safe.”

In addition to a very active intern Slack channel, where people share a few jokes along with the projects they’re working on, Tarik says weekly “office hours” have been especially helpful in getting to know his fellow interns. “We can go and spend an hour just chatting with each other and the University Team, or even just work in the same ‘room.’ That’s been great.”

Even with careful planning and a remote-ready team, Mozilla’s first summer of fully distributed internships will no doubt offer plenty of learning opportunities. “I’m sure there’s room for improvements, and we want to understand as much as we can about our interns’ experience this year,” Frances says. And, she adds, what Mozilla learns in 2020 could help make future programs accessible to a much wider range of people for years to come: “Because we’ve tested this model, we may be able to expand to a more global internship program, where things like time zones won’t be an issue.”

In the meantime, she’s excited to see what Tarik, Austin, and their fellow interns contribute to Mozilla’s mission. “Our managers treat interns like they’re already full-time members of the team. We want the projects they work on to be part of something bigger and live on long after their internships end.”