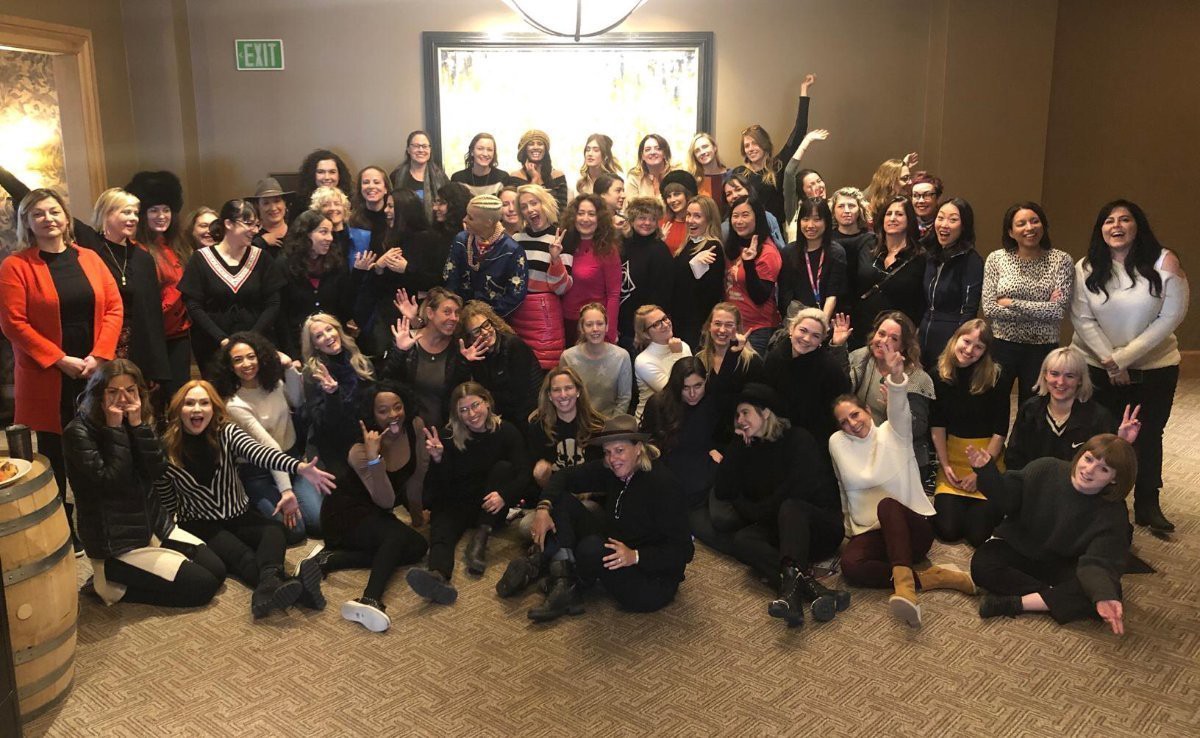 Our goal as technologists at Mozilla is to ensure the next wave of internet, wherever that takes us beyond the screen, reflects the makeup of the world around us.

With that in mind we created the XRStudio to provide a space for women and gender non-binary people to collaborate, learn and create projects using virtual reality, augmented reality, and artificial intelligence.

We learned a lot about what’s coming down the pipeline from the projects that came out of XR Studio 2018. We have since released our v.1 Inclusive Development Space Toolkit, inspired by our experience hosting the XR Studio, for others to do the same.

Last month we headed to a hot spot for creators and technologists, the Sundance Film Festival with two XRStudio fellows, Anastasia Victor and Tyler Musgrave to learn what inspires them to create, how can we all work to elevate women and what types of environments we need to create to make this a reality. You can also check out Kent Bye’s podcast over at Voices of VR, where he manages to make a seven person conversation both coherent and compelling. Skills! Here’s more from Anastasia and Tyler in their own words:

Q: First things first, tell us a bit about yourself and what you’re working on at the moment?

Anastasia: Hi! I’m an artist / creative technologist — I used to be an architect but these days I work primarily with augmented and virtual reality. My practice is centered around using immersive art to promote public discourse about the social impacts of emerging technologies. I’m currently a resident at the Gray Area Foundation, where I’ve been exploring the ethical issues with commercial facial recognition, by creating AR apps that allow users to experience these technologies in real-time. I also work on large-scale physical installations integrate immersive technologies like AR/VR with the physical world. I also co-founded a cross-disciplinary research non-profit called PLACE, that explores the socio-spatial implications of XR through art, design and education.

Tyler: So I am Ty, an emerging XR producer, restorative justice practitioner and futurist. Before coming to the Bay Area, I was a US Peace Corps volunteer in Cameroon, West Africa collaborating on public health and education projects. Most recently, I was a participant of the XRStudio hosted by Mozilla. Currently, I am building my Restorative VR platform combining restorative practices and immersive technology, working on a docu series that will storytell restorative justice practices happening within Oakland, CA. I am the Co-Chair of ARVR Women and Allies Futurist in Residence program and newly joined the Mursion INC operations team in SF.

Q: So how did you both meet and why were you at Sundance? 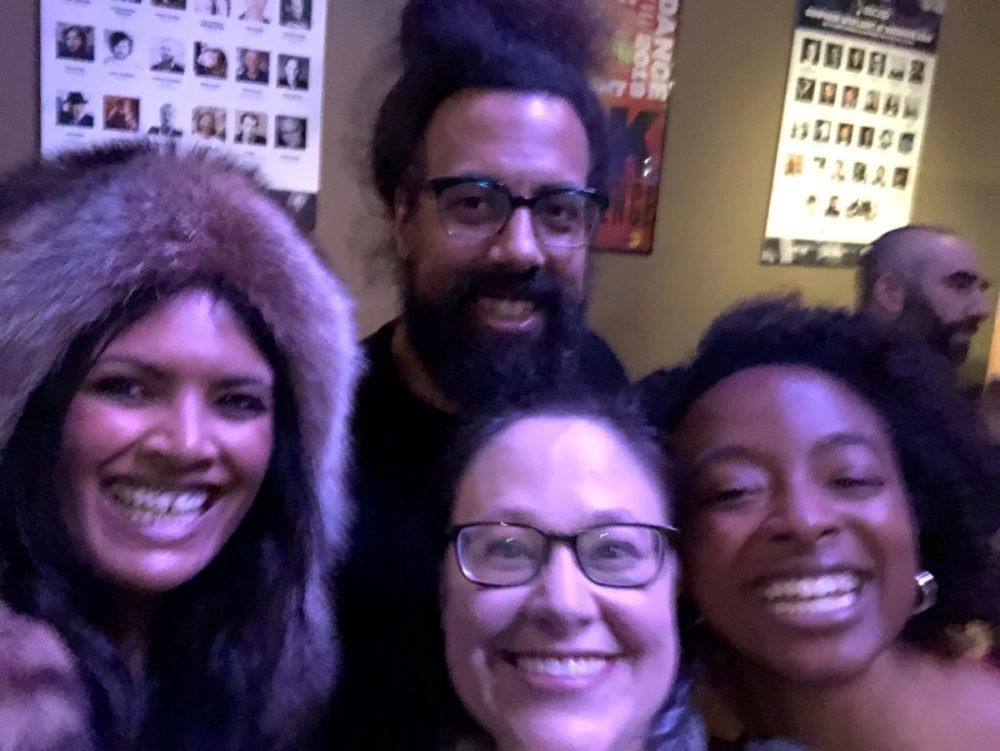 Tyler: As I recall, Anastasia and I met at Mozilla’s XRStudio program that began in May 2018, and wapped with a final showcase event in October 2018. Based in the Community space of the Mozilla office in San Francisco, over twenty active participants who self-identified as women or gender non-binary were given 24/7 restricted access to work at diverse schedule times to fit their needs. As a part of the program, XR Studio participants used hardware equipment both purchased by Mozilla and donated by leading companies in VR, AR, and mixed reality spaces to complete 1–3 projects to showcase. The XR Studio program was founded to offer a jumpstart for women makers, providing access to mentors, equipment, ideas, and community with others like them. Mozilla is diligently working to spread this program and find partners who believe in this mission of creating spaces like the XRStudio, so other than enjoying Sundance for what it is was, we were there to spread the word and create media around the program.

Anastasia: Just to add to that, Sundance has been running a program called New Frontier for the past decade, which has been one of the most progressive platforms for artists, filmmakers and creative technologists working with emerging tech. The works this year really showcased the incredible breadth of XR as a medium, from pieces like ‘The Dial’ (Peter Flaherty / NightLight Labs), which used AR and a users location to control narrative time, to ‘Travelling While Black’, a VR film directed by Roger Ross Williams that underscored the struggles that African-American people face travelling around the US. Other works like ‘Interlooped’ (Maria Gupta) explored embodiment through live,multi-user, volumetric, mixed-reality installation. ‘Mica’ ( Magic Leap / Alice Wroe) allowed users a first glimpse into emotionally connecting with sentient AI. As someone who works in the medium of XR, it was incredible to experience the creativity and ingenuity expressed through this immersive art.

Q: What does it mean to you to ‘elevate women’ in the XR space?

Anastasia: I think it means providing opportunities to female-identifying/gender non-binary people that allow us to move into roles that we’re currently underrepresented in — particularly in positions of leadership in male dominated industries like XR development. These ‘opportunities’ exist in many forms, from skill-sharing/education to making introductions and sharing networks. As a queer, woman of color working in tech, I felt really fortunate to be part of XR studio. I hadn’t before experienced an environment like that within an established tech company, which offered both resources and support. One of the main products of XR studio was the Inclusive Development Space Toolkit, that lays out the foundation for what will hopefully be a replicable initiative around the world.

Tyler: It is not a surprise in a field that is “re-emerging” that women and non-binary individuals would be under-represented and undervalued. For example, Siciliana Trevino wrote a grant for the ARVR women and allies Futurist residency because there was only about 2% of Black Women surveyed working in the XR space and the reason XRStudio was created by Ann-Caryn Cleveland to provide a safe and equipped spaces for women and non-binary individuals to learn and develop in the XR field (alongside the toolkit like Anastasia mentioned above). For me it is vital that women are elevating one another in the XR space especially, in moments of visibility whether it be on social media and/or opportunities to work and/or presenting about their work — we need brave women who relentlessly give opportunities to other women without questions and/or hesitation. I think we need to step away from tokenism and the mindset of being the first and/or the one because that is a lonely rabbit hole that in the long run doesn’t help anyone. Our male counterparts should acknowledge the gender inequities within the space and want to be actively apart of an XR future that is inclusive, safe, and equitable. I hope one of these days we can focus attentively on the community building aspects within XR space, the human connections, that cannot be replaced by immersive technology when we do business, at conferences, creating in labs, etc. We need for people to make these suggestions a priority and not an afterthought. 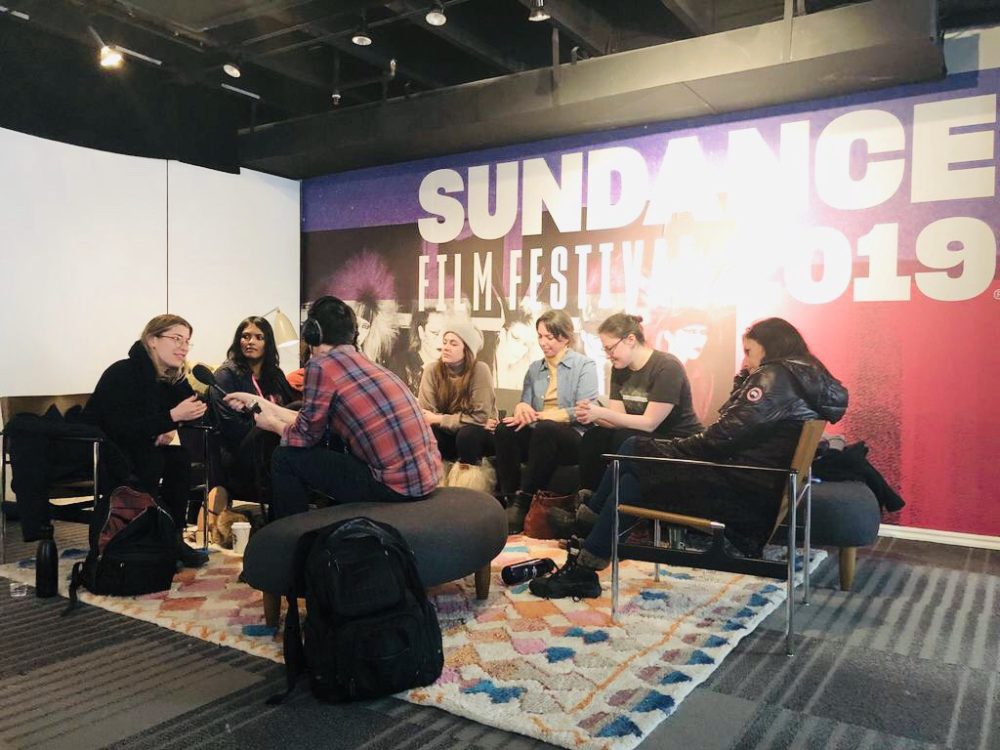 Q: What do you think needs to happen to further the position of women in XR?

Anastasia: I think that funding more women is key. When we were recording the Voices of VR podcast, Nonny de la Peña pointed out that female-identifying founders received only 2% VC funding in 2018 and I remember the looks on the faces of every woman in the room ie. how is this still happening!! There’s a long road ahead but it will be made much easier with more female-identifying/gender non-binary people in leadership positions, work environments that are free from harassment / marginalization, and equal compensation. Also people need to stop asking us if we ‘actually write code’ or ‘really make things in VR’. Even as a microcosm, the majority of the women (Shashkes Sarit, Neilda Pacquing, Clorama Dorvilias, Christine Mienders, Evo Heyning) in XR studio have had their competence and skill challenged through these gender biases. #ILookLikeAnEngineer

Tyler: I would love for women in XR to have more designated spaces for ourselves to build community, present our work and collaborate. I had a really great entry into the XR space through the XRStudio which, of course, had its ups and downs. We must realize that when we are building community, there will be just as many conflicts as there will be good times but by restoratively, addressing the conflict/harm right away and proactive about addressing it by creating codes of conducts and/or re-evaluating community values (for example) so that conflict doesn’t cause stagnation or manifest longer than it should. I believe to further women in XR we need to give those who have been in the space doing great work for awhile like Iva Leon, Charity Everett, A.M Darke, Nicole Lazzaro, Jasmine Roberts (to name a few) the recognition and platforms they deserve, and welcoming newcomers with opened arms who have great ideas to contribute into the space- it is all possible !

Q: What was your overall impression of Sundance?

Tyler: Wow, my overall impression of Sundance… well, to be honest, I didn’t come with too many expectations. Part of me was still shocked in the fact that I actually was at Sundance, which is definitely a bucket list moment for me. I wanted to soak the experience up and do a great job representing Mozilla, especially, since I feel like this won’t be my last time getting to attend the festival. Some of my highlights were attending the showing of Dirty God written by Sacha Polak, speaking with Kent Bye of Voices of VR about Restorative VR, and hanging out with the Mozilla/XRStudio ladies! I did notice though that Park City seemed very bloated and I would love for the festival to focus on making it an accessible city so, that everyone can enjoy the festivities, not just able-bodied folks next year.

Anastasia: I would definitely echo Tyler here! I was really blown away by the curation, which underscored the power of promoting diverse creators through the types of stories being told. For example, ‘Imaginary Order’, written and directed by Debra Eisenstadt, chronicles the hilarious, bizzare and emotionally complex journey of a suburban mother as she approaches menopause. Amazingly, 45% of of directors at Sundance this year were women, which sets a necessary precedent for the industry in general. I’m glad that so many women had the opportunity to diverge from the stories that women are expected to tell and importantly, to show that there’s a market for their narratives. It was also really incredible to connect personally with so many talented actors, creators, curators, and producers, to better understand how they approach funding and their creative processes.

Anastasia: Hit me up anytime with questions, collaborations or ideas at @AVmakesthings on Twitter or Instagram or check out some of my work at http://anastasia.io. I’ll also be speaking at Binary Salon and speaking at SxSW so come say hi! Also, huuuuge thank you to Miram Avery and Ann-Caryn Cleveland for creating XRStudio and to Mozilla for supporting female-identifying / gender non-binary creators in the XR space!

Tyler: Thank you so much Mozilla’s team: Ann-Caryn Cleveland, Sandra Persing, Miriam Avery, Janette Ciborowski, and Lizz Noonan for the amazing opportunity! Follow me on @Restorative_VR on twitter. Currently, I am looking for folks interested in restorative justice and collaborating to build the restorative vr platform. Don’t hesitate to reach out 🙂