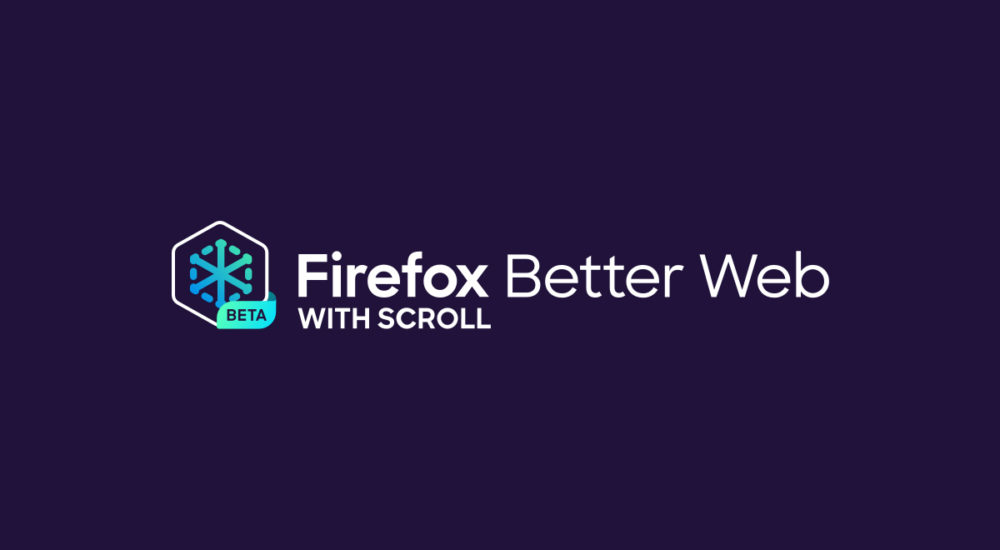 Today we are launching a new Test Pilot initiative called Firefox Better Web with Scroll. The Firefox Better Web initiative is about bringing the ease back to browsing the web. We know that publishers are getting the short end of the stick in the current online ad ecosystem and advertising networks make it difficult for excellent journalism to thrive. To give users what they want most, which is great quality content without getting tracked by third parties, we know there needs to be a change. We’ve combined Firefox and Scroll’s growing network of ad-free sites to offer users a fast and private web experience that we believe can be our future.

If we’re going to create a better internet for everyone, we need to figure out how to make it work for publishers. Last year, we launched Enhanced Tracking Protection by default and have blocked more than two trillion third-party trackers to date, but it didn’t directly address the problems that publishers face. That’s where our partner Scroll comes in. By engaging with a better funding model, sites in their growing network no longer have to show you ads to make money. They can focus on quality not clicks. Firefox Better Web with Scroll gives you the fast, private web you want and supports publishers at the same time.

To try the Firefox Better Web online experience, Firefox users simply sign up for a Firefox account and install a web extension. As a Test Pilot, it will only be available in the US. The membership is 50% off for the first six months at $2.50 per month. This goes directly to fund publishers and writers, and in early tests we’ve found that sites make at least 40% more money than they would have made from showing you ads.

In February of 2019, we announced that we were exploring alternative revenue models on the web. Before we committed to any particular approach, we wanted to better understand the problem space. The entire investigation followed a very similar arc to the work we did with Firefox Monitor. We let the user be our guide, putting their expressed needs and concerns at the forefront of all of our work. We also tested cheaply and frequently. At each stage increasing the level of investment, but also the clarity of data.

One of our tests was an initial experiment with Scroll to discern whether there was an appetite and desire for this type of online experience. We wanted to get a better sense from our users on what they cared about the most and figure out the pain points for news sites as well, so we used multiple different value propositions to describe the service that Scroll offered. Here are our findings:

Firefox Better Web combines the work we’ve done with third-party tracking protection and Scroll’s network of outstanding publishers. This ensures you will get a top notch experience while still supporting publishers directly and keeping the web healthy. We use a customized Enhanced Tracking Protection setting that will block third-party trackers, fingerprinters, and cryptominers.This provides additional privacy and a significant performance boost. Scroll then provides a network of top publishers who provide their content ad-free.

Firefox Better Web is available everywhere, but BEST in Firefox! See for yourself with our images:

Your membership is paid directly to the publishers in Scroll’s network based on the content you read. Our hope is that the success of this model will demonstrate to publishers the value of having a more direct, uncluttered connection to their online audience. In turn, the publisher network will continue to grow to include every site you care about so that your money can go directly to pay for the quality journalism you want to read. If you’re a publisher who wants to join this initiative, contact Scroll and see how this funding model can drive more revenue for you.

We invite you to try out Firefox Better Web and experience a private and faster way to read the news and stories you care about.