“Finally!  Mozilla Firefox is now available for Apple’s iOS”  “Couldn’t be more excited about Firefox on iOS”.   “Love having Firefox on my iPhone. Worth the wait.”

And so did the feedback go, as Mozilla entered the Apple ecosystem with its Firefox mobile browser on November 12, 2015.  With over 1 million downloads in the first week of launch, it quickly gained popularity and accelerated to the top spot in the iPad Utility category in nearly 50 countries. Initial sentiment was overwhelmingly positive, reflective of the prominent stance Firefox has among an alternative-seeking, tech-edgy aficionados who appreciate the open source environment.  The launch of Firefox on iOS captivated the attention of competition and faithful users alike, and got closely examined by the press.  There was a sigh of relief that Mozilla has entered this space – the familiar and favorite browser for many was the newest iTunes app store addition!

It wasn’t long before euphoria was replaced by reality.  Firefox for iOS started with a carefully selected list of supported functionality.  The team has made a deliberate choice to launch with a specific feature set and gradually augment the experience. We knew what we were up against, and laid out clear goals and expectations accordingly.

Since we launched, we have been closely monitoring user feedback both through iTunes Connect as well as input.mozilla.org.  These forums, in addition to diary studies and other forms of user research we routinely conduct, have proven extremely valuable as they represent a fairly nuanced measure of the broad user sentiment for the Firefox for iOS app.

We are hard at work addressing many of the above mentioned points with enhancements lined up for upcoming releases. In doing so, we will always try to push the envelope and delight the user by simplifying and optimizing interactions.  While some features are in our control, others like setting Firefox as the default browser or providing content blocking similar to Safari, are not available on the iOS platform. Thus, we have to be creative and balance expectations and outcomes. The user feedback we have been receiving is only one of several entry points for our product prioritization and direction, albeit a very important one since it represents the “voice of the user”.

So, keep these valuable comments coming!  We do read and review every bit of feedback that we receive. Scrutinize us and let us grow a product that you can’t live without on your iOS device!

To send a comment, go to settings / send feedback page in-app, or email us at: ios-feedback@mozilla.com. 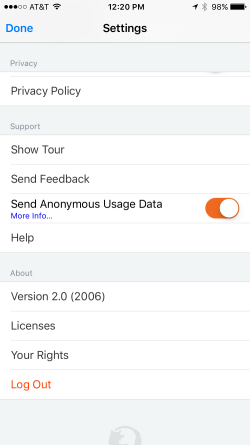 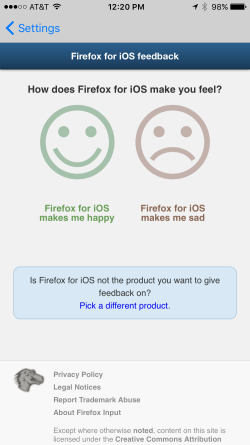 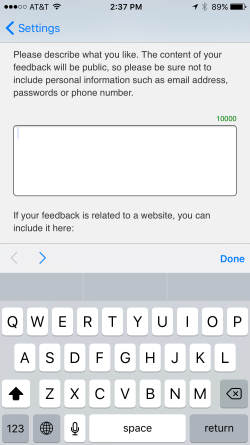