I just landed bug 657327, which makes about:memory simpler and more useful.  To understand the change, let’s look at what about:memory looked like before the change landed. 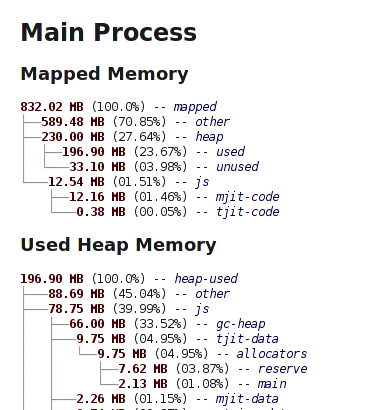 The first thing to look at is the “mapped” entry at the top of the “Mapped Memory” tree.  It was meant to measure the total memory (both private and shared) mapped by the process.  But there were a couple of problems with it:

So, in summary, the very first number shown on about:memory was (a) incorrect on Windows, (b) misleadingly inflated on Mac, and (c) not much use on Linux.

The other thing to notice about the old about:memory is that there are two trees, “Mapped Memory” and “Used Heap Memory”.  For the purposes of this discussion, memory usage can be split into four groups.

In the old about:memory, 1 is shown in the “Used Heap Memory” tree, and 2, 3 and 4 are shown in the “Mapped Memory”.  But it’s 1 and 3 that we’re most interested in, because that’s memory that has been explicitly requested (and not yet freed) by Firefox.  That’s where most of the dynamic variation in memory usage occurs, and that’s where memory leaks occur.

The new about:memory reflects this better. 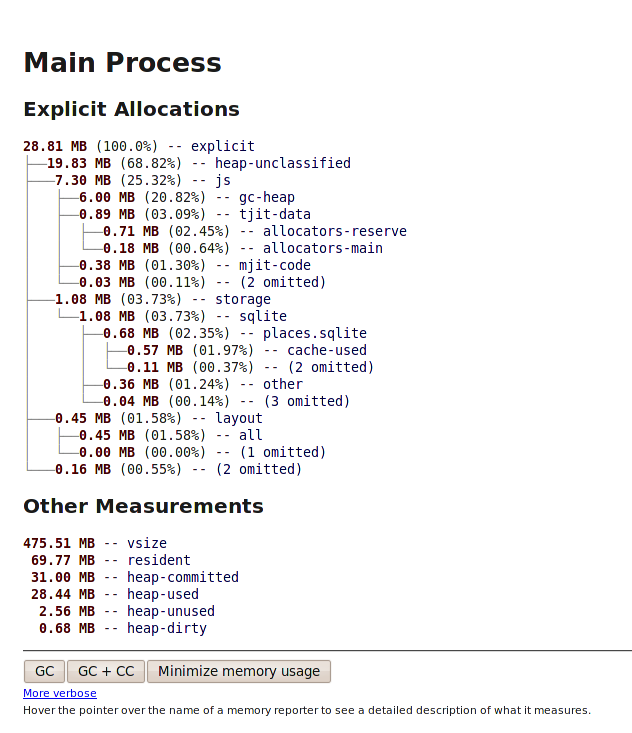 It has a single tree which only includes explicit allocations, and which does not distinguish between heap-level allocations (e.g. malloc) and OS-level allocations (e.g. mmap);  this shortens the output and reduces the amount of nesting in the tree.  Implicit allocations (2 and 4 above) are still covered, but only in the less-prominent “Other Measurements” list (under “vsize” and “heap-unused”).  And the “explicit” entry, the very first one, is now the single most interesting number on the page.  (Thanks to Jesse Ruderman for suggesting that I merge the two trees and flatten the resulting tree.)

One interesting thing I’ve noticed is that out “heap committed” measurement corresponds pretty well to what the Mac Activity Monitor reports under “Real Mem”. An in my case that’s about 2GB right now, while “Heap Used” is only 1GB… I wonder how much of that is fragmentation.

Please give us a tool to measure addon memory consumption… :/

After using about:memory for a time I have a question. Is the 100% explicit the memory that Firefox should use if it was perfect with memory handling?

I ask this because I see the explicit number move in the way I would expect when I open and close tabs. So my explicit is now at 356MB, my resident is 535MB and Windows claims it is 474MB. Chrome does this really well and you immediately get the memory back from a tab when you close it.