Downloading files on your device still exposes a major security risk and can ultimately lead to an entire system compromise by an attacker. Especially because the security risks are not apparent. To better protect you from the dangers of insecure, or even undesired downloads, we integrated the following two security enhancements which will increase security when you download files on your computer. In detail, Firefox will:

Downloading files via an insecure HTTP connection, generally exposes a major security risk because data transferred by the regular HTTP protocol is unprotected and transferred in clear text, such that attackers are able to view, steal, or even tamper with the transmitted data. Put differently, downloading a file over an insecure connection allows an attacker to replace the file with malicious content which, when opened, can ultimately lead to an entire system compromise. 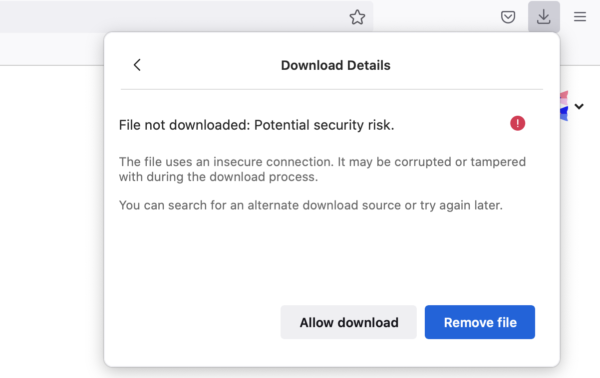 Firefox 93 prompting the end user about a ‘Potential security risk’ when downloading a file using an insecure connection.

As illustrated in the Figure above, if Firefox detects such an insecure download, it will initially block the download and prompt you signalling the Potential security risk. This prompt allows you to either stop the download and Remove the file, or alternatively grants you the option to override the decision and download the file anyway, though it’s safer to abandon the download at this point.

The Inline Frame sandbox attribute is the preferred way to lock down capabilities of embedded third-party content. Currently, even with the sandbox attribute set, malicious content could initiate a drive-by download, prompting the user to download malicious files. Unless the sandboxed content is explicitly annotated with the ‘allow-downloads’ attribute, Firefox will  protect you against such drive-by downloads. Put differently, downloads initiated from sandboxed contexts without this attribute will be canceled silently in the background without any user browsing disruption.

As a Firefox user, you can benefit from the additionally provided security mechanism as soon as your Firefox auto-updates to version 93. If you aren’t a Firefox user yet, you can download the latest version here to start benefiting from all the ways that Firefox works to protect you when browsing the internet.