Can you safely deliver entropy to a remote system?

Running a system without enough entropy is like tolerating a toothache: something you’d really like to fix, but not quite bothersome enough to deal with. 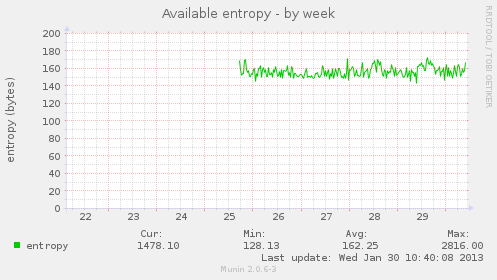 I recently bought a Simtec EntropyKey to fix this locally: it’s a little USB dongle with avalanche-noise generation hardware and some firmware to test/whiten/deliver the resulting stream to the host. The dongle-to-host protocol is encrypted to protect against even USB man-in-the-middle attacks, which is pretty hardcore. I like it a lot. There’s a simple Debian package that continuously fills /dev/random with the results, giving you something more like this (which would look even better if Munin didn’t use entropy-consuming TCP connections just before each measurement): 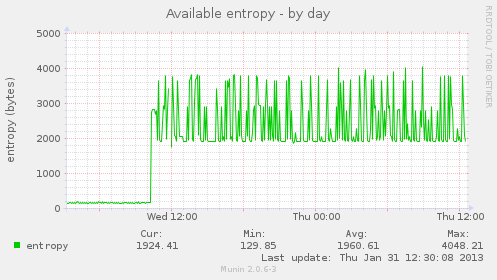 But that’s on local hardware. What about virtual servers? I’ve got several remote VPS boxes, little Xen/KVM/VirtualBox slices running inside real computers, rented by the hour or the month. Like many “little” computers (including routers, printers, embedded systems), these systems are usually starved for entropy. They lack the sources that “big” computers usually have: spinning disk drives and keyboards/mice, both of which provide mechanical- or human- variable event timing. The EntropyKey is designed to bring good entropy to “little” machines. But I can’t plug a USB device into my remote virtual servers. So it’s pretty common to want to deliver the entropy from my (real) home computer to the (virtual) remote boxes. Can this be done safely?

Well, mostly nope: it depends upon how you define the threat model. First, let’s go over some background.

Remember that entropy is how you measure uncertainty, and it’s always relative to an observer who knows some things but not others. If I roll an 8-sided die on my desk right now, the entropy from your point of view is 3 bits. From my point of view it’s 0 bits: *I* know I just rolled a five. And now that *you* know that I rolled a five, it’s 0 bits from your POV too.

Computers use entropy to pick random numbers for cryptographic purposes: generating long-term SSH/GPG/TLS keys, creating ephemeral keys for Diffie-Hellman negotiation, unique nonces for DSA signatures, IVs, and TCP sequence numbers. Most of these uses are externally visible: the machine is constantly shedding clues as to its internal state. If the number of possible states is limited, and an eavesdropper can observe all (or most) of these clues, then they can deduce what that internal state is, and then predict what it will be next. The amount of computation Eve needs to do this depends upon how uncertain she is, and on the nature of the clues.

The most conservative model assumes that Eve sees every packet going into and out of the system, with perfect timing data, and that she knows the complete state of the system before the game begins (imagine that Eve creates a VM from the same EC2 AMI as you do). If she is truly omniscient, and the system is deterministic, then she will know the internal state of the system forever: all she has to do is feed her own clone the same input as your box receives, at the same time, and watch how its internal state evolves. She doesn’t even need to watch what your box outputs: it will always emit the same things as her clone.

If she misses a few bits (maybe she can’t measure the arrival time of a packet perfectly), or if there are hidden (nondeterministic) influences, then she needs to guess. For each guess, she needs to compare her subsequent observations against the predicted consequences of that guess, to determine which guess was correct. It’s as if she creates a new set of nearly-identical VMs for each bit of uncertainty, and then throws out most of them as new measurements rule them out.

There might be a lot of potential states, and it might take her a lot of CPU time to test each one. She might also not get a lot of observations, giving her fewer opportunities to discard the unknowns. Our goal is to make sure she can’t keep up: at any important moment (like when we create a GPG key), the number of possibilities must be so large that all keys are equally likely.

(In fact, our goal is to make sure she can’t retroactively catch up either. If we create a key, and then immediately reveal all the internal state, without going through some one-way function first, she can figure out what the state was *earlier*, and then figure out the key too. So the system also needs forward-security.)

Bootstrapping Towards Entropy Is Technically Impossible …

To get out of this compromised Eve-knows-everything state, you have to feed it with enough entropy (which are bits that Eve doesn’t see) to exceed her ability to create and test guesses. But she’s watching the network. So you must feed entropy in locally (via the keyboard, locally-attached hardware, or non-deterministic execution).

Could you deliver entropy remotely if you encrypted it first? Sure, but you have to make sure Eve doesn’t know the key, otherwise she can see the data too, and then it isn’t entropy anymore. Encrypting it symmetrically (e.g. AES) means your remote random-number generator machine shares a secret key with the VM, but we already assumed that Eve knows the VM’s entire state, so it has no pre-existing secrets from her. To encrypt it asymmetrically (via a GPG public key) means the VM has a corresponding private key: again, Eve’s insider knowledge lets her decrypt it too.

Can you use authenticated Diffie-Hellman to build a secure connection *from* the VM to the remote entropy source? This would put a public key on the VM, not a private one, so Eve doesn’t learn anything from the key. But DH requires the creation of a random ephemeral key (the “x” in “g^x”), and Eve can still predict what the VM will do, so she can guess the ephemeral key (using the published g^x to test her guesses), determine the shared DH key, and decrypt the data.

So, in the most conservative model, there’s no way to get out of this compromised state using externally-supplied data. You *must* hide something from Eve, by delivering it over a channel that she can’t see.

The real world isn’t quite this bad, for a few reasons:

How To Do It

So in practice, once the kernel pool gets perhaps 128 or 256 bits of real
entropy, Eve’s job becomes impossible. This needs to happen before any
significant secrets are generated. How can we get to this point?

You’d probably think you ought to encrypt these network requests, but as described above it’s not really clear what this buys you. The best hope is that it increases the cost of Eve’s guess-testing. You might not bother with authenticating this link: if the RNG is well-designed, then it can’t hurt to add more data, even attacker-controlled data (but note that entropy counters could be incorrectly incremented, which means it can hurt to *rely* on attacker-controlled data).

Continuing this analysis, you might not even bother decrypting the data before adding it to the pool, since that doesn’t increase the entropy by more than the size of the decryption key, so you can get the same effect by just writing the key into the pool too. (But it might be more expensive for Eve if her guess-testing function must include the decryption work).

And if you don’t bother decrypting it, then clearly there’s no point to encrypting it in the first place (since encrypted random data is indistinguishable from unencrypted random data). Which suggests that really you’re just piping /dev/urandom from one box into netcat, plus maybe some timestamps, and just have to hope that Eve misses a packet or two.

What about entropy counters, and the difference between /dev/random and /dev/urandom? They’re trying to provide two different things. The first is to protect you against using the RNG before it’s really ready, which makes a lot of sense (see Mining Your Ps and Qs for evidence of failures here). The second is to protect you against attackers who have infinite computational resources, by attempting to distinguish between computational “randomness” and information-theoretic randomness. This latter distinction is kind of silly, in my mind. Like other folks, I think there should be one kernel source of entropy, it should start in the “off” mode (return errors) until someone tells it that it is ready, and switch to the “on” mode forevermore (never return errors or block).

But I’ll have to cover that in another post. The upshot is that it isn’t safe to make this startup-time off-to-on mode switch unless you have some confidence that the data you’ve added to the kernel’s entropy pool is actually entropy, so attacker-supplied data shouldn’t count. But after you’ve reached the initial threshold, when (in my opinion) you don’t bother counting entropy any more, then it doesn’t hurt to throw anything and everything into the pool.

(cross-posted to my personal blog)

This entry was posted on Tuesday, March 4th, 2014 at 10:59 am and is filed under Cryptography. You can follow any comments to this entry through the RSS 2.0 feed. You can leave a comment, or trackback from your own site.