Recently, I worked on a nice little feature for AMO: Letting developers reply to user reviews.

The idea is, when you get a review as an add-on publisher, you may find a spot or two in it that you feel like replying to. In the previous version of AMO, users started discussions by just adding another review (with a random rating), effectively rendering parts of the rating system useless. Also, the developers were not allowed to rate their own add-ons and could thus not reply to any of the questions.

In AMO version 3, we addressed this issue by having our editor team moderate reviews to ensure “good” reviews and thus useful ratings. For discussions around individual add-ons, we introduced a forum system to provide a more appropriate means of discussing support questions and similar while not diluting the review/rating system. This, however, left reviews as a one-way communication with no way for developers to address questions raised in their add-ons’ reviews.

This issue is now fixed: As of today’s AMO update, developers can now reply once to each of the published reviews of their add-ons. 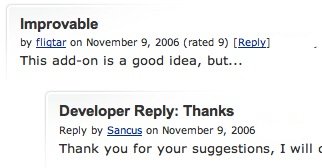 The reason why we only allow one reply is so that discussions are held in the discussion forums (which is where they should be, as mentioned above), while not forcing developers to keep possible allegations undisputed. Some of you may notice parallels to the rating system Ebay uses for sellers.

Before you start replying to a bunch of reviews now: Remember, the reviews of your add-on are a place for your users to give feedback and point out good or bad things (in their opinion) about your add-on. Developer replies will also be moderated by editors, just like regular reviews. So, as always, play nice, even if you disagree with the opinion explained in the user review. If you get a bad review once, don’t fret: Rather than “yelling” at the user (which will most likely be deleted by an editor anyway), you should take it as an encouragement to make your add-on better. After all, the user considered your add-on interesting enough to download and test it and give you feedback on the points they found improvable. This is how great add-ons start!

We hope you enjoy the new feature! If you find any problems with it, feel free to drop by #amo on irc.mozilla.org or to file a bug as usual.

Fred is the former web development manager of Mozilla's Developer Ecosystem team. He likes to solve tricky problems, is an Open Source geek, and brings German Engineering to the webdev crowd. Fred spends his spare time on the hunt for great food and real Italian espresso.