While the tech industry has long struggled to attract a diverse workforce, that problem is even more acute in the open source community. In one 2017 survey, just 3% of respondents identified as women and only 16% as ethnic or national minorities, compared to 21% and 38%, respectively, of programmers overall. At Mozilla, we are committed to improving diversity, equity and inclusion within our organization and beyond, and in 2013, we started a partnership with Outreachy, an organization that connects people from underrepresented groups with three-month paid internships in open source. We have since hosted more than 100 Outreachy interns, each of them paired with at least one volunteer mentor, and many of them have gone on to join our team full time. 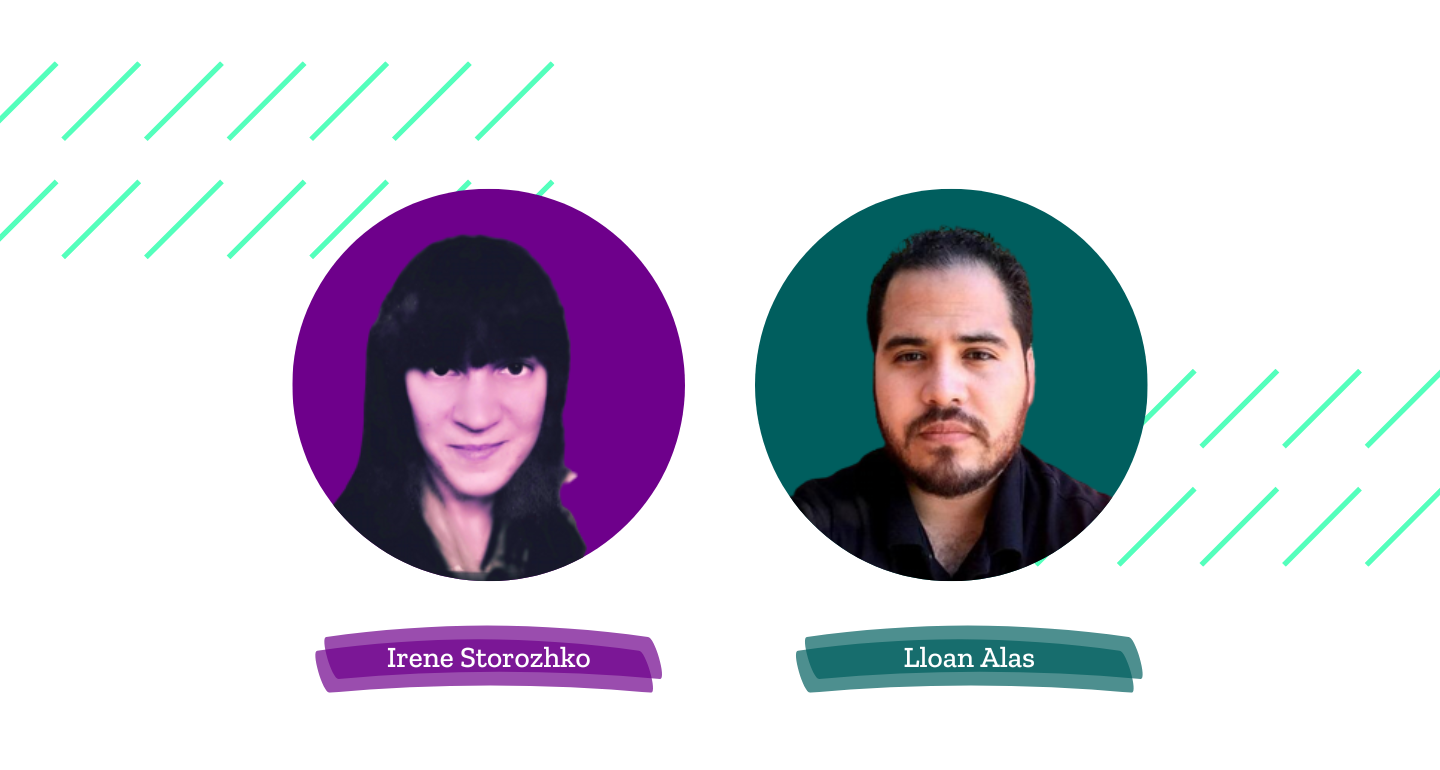 Irene Storozhko’s path to Mozilla started with a simple search on YouTube. A Vancouver, BC-based translator at the time, she was learning JavaScript in hopes of starting a career in software development, and stumbled upon a talk by Anjana Vakil⁠ — now a prominent speaker and advocate, and then an Outreachy intern with Mozilla.

“I went to her LinkedIn, and I was so surprised,” Irene remembers. “I thought only very experienced people got to give talks at conferences, and here was someone who had just started learning, like me.”

Irene looked into Outreachy and found the application process for Mozilla’s next cohort was starting in about a month⁠, in September 2016. She applied right away.

For Lloan Alas, Outreachy was less an inroad into tech and more an opportunity to build community⁠ — and to conquer impostor syndrome. He’d worked as a developer for several years and even established a nonprofit, a networking community in the Riverside area of Southern California, when he became an intern in the spring of 2019.

“I was looking for validation, and for mentorship,” he says. “I didn’t think I’d qualify at first; then I realized that some of the projects were based on technology I was already familiar with. The idea that my code could be used by millions of people — I was very excited.”

Like all Outreachy candidates whose initial applications are approved, the next step for Irene and Lloan was a monthlong “contribution period,” where potential interns work on tasks like bug fixes and documentation to help mentors get to know them and understand what they can do. They were both ultimately accepted, but Lloan says contributing would have been worthwhile either way.

“Even if I hadn’t been selected, that was a great experience,” Lloan says. “It helped me understand what it felt like to work remotely. We were communicating a lot with the mentors and establishing that relationship, and I met some of the other candidates. Two of them also went on to intern, and we became pretty close⁠ — when we went to Mozilla All Hands, we hung out all week.”

Because she was new to the field, Irene and her mentors decided she would spend the first week learning more about some of the technologies and languages she’d use, along with completing Mozilla’s onboarding program to help her understand the technical stack and development environment. Then she began her project: migrating the GitHub integration for Taskcluster, a continuous integration framework for automatically testing Firefox releases.

For Lloan, a change in Mozilla’s roadmap meant he had to wait longer to dive in on his primary project⁠ — but he gained more time to explore while he and his mentor, Developer Tools Engineering Manager Jan Odvarko, decided what he should work on instead.

“I started looking for bugs I could fix all over — the console product, the network product. Anything I could understand,” Lloan remembers. “Jan had a list of things they’d wanted to do but hadn’t had time for, and he wanted to find something I felt passionate about.”

Eventually, they settled on building search functionality for the network panel in Firefox. Because Jan is based in the Czech Republic, nine hours ahead of California, Lloan would often compile questions for their daily chats. But the time difference also made for a streamlined process; if he pushed code at the end of the day, he could wake up to Jan’s review. He also worked closely with other team members, including Nicolas Chevobbe, the lead for the Firefox console.

“There was never a time where someone said, ‘Oh, you’re not my intern,’” Lloan says. “I always felt welcome to ask questions — and they asked me questions, too! We all have different experiences, and something different to contribute.”

Irene also met regularly with her mentors, and says their support helped her build confidence. “In the beginning I would get really nervous working on a project, and they always took the time to talk with me and relate their own experiences — the things they’d struggled with when they were starting, and that they’d had a lot of the same worries. That helped me calm down and feel like, ‘Okay, I can do this. I can be an engineer.’”

Despite the delay getting started, Lloan was able to complete his search functionality project; Mozilla extended his internship for a couple of weeks so he could finish it up. Irene, too, wrapped up the Github integration and even had time for a “bonus” project: She proposed creating a form users could fill out to get a ready-made configuration file for their repositories, and her mentors told her to go for it.

Near the end of her internship, Irene also got to deliver a “tech talk” to the Taskcluster team on what she’d learned — a full-circle moment, given that a talk had initially led her to Outreachy. But she says the highlight of the three months was traveling to Toronto to spend a week with her mentors and other teammates in person. “That was so fun. We’d work together, and then we’d all go out and eat together. It was awesome,” she says.

Lloan’s favorite internship moments were also tied to a trip; because they were at Mozilla during the company’s in-person All Hands in Whistler, Canada, he and his fellow Outreachy interns were invited to attend. “It was wonderful,” he says. “You go into different rooms and people from different teams are working on things or chatting, and you can sit anywhere you want and just join in. Where else can you do that? It was very cool.”

That openness and transparency, he says, even extended to sharing feedback on All Hands itself. When the leadership team sent out an email asking for comments after the event, Lloan shared how much he’d enjoyed the experience but also pointed out he’d been one of only a handful of non-white people in attendance. “They thanked me for speaking up and said it was something they were working on, which honestly is one of the things I like so much about Mozilla,” he says. “They’re upfront about needing to improve on diversity and inclusion, and I see what they’re doing to make that happen. I appreciate that.”

In fact, Lloan says that when he decided to join the company full time two years after his internship, Mozilla’s culture was a big part of the reason why. “Everyone here is focused on trying to help others. There are very smart people on this team — people at the top of their field who could be working at larger companies. But they choose to stay here.”

Irene also joined full time about 18 months after completing her internship, though the offer came as a surprise at first.

“The team didn’t have the headcount to hire me at the end of my internship, and I’d found another job, but I kept contributing and was invited to All Hands as a volunteer,” she says. “In the meantime, someone had left the team, so they had an opening — and when I was at All Hands, they asked if I’d like to join.”

Irene accepted, and while she’s since switched from Taskcluster to GeckoView, she says many of the things she learned during her internship are still serving her well today — from navigating a large code base to handling potentially challenging conversations like code reviews. She’s even become a mentor in Outreachy herself.

“We had a wonderful intern a couple of years ago who implemented a new algorithm to make the parser in our Taskcluster library more robust. It was really fun to work with her, and that project is still in use today,” Irene says. “Mentoring is also such a great opportunity to grow your leadership skills. I’d love to do it again.”

Lloan is settling into a longer-term role at Mozilla after a couple of moves to new teams, and is keeping busy with his nonprofit and pursuing a Ph.D. — but he hopes being a mentor is on the horizon for him, as well. “We’ve already had another member of the nonprofit go through Outreachy, and I’m looking forward to getting involved directly again someday,” he says. “Whether you’re a candidate, an intern, or a mentor, it’s a great opportunity for everyone.”