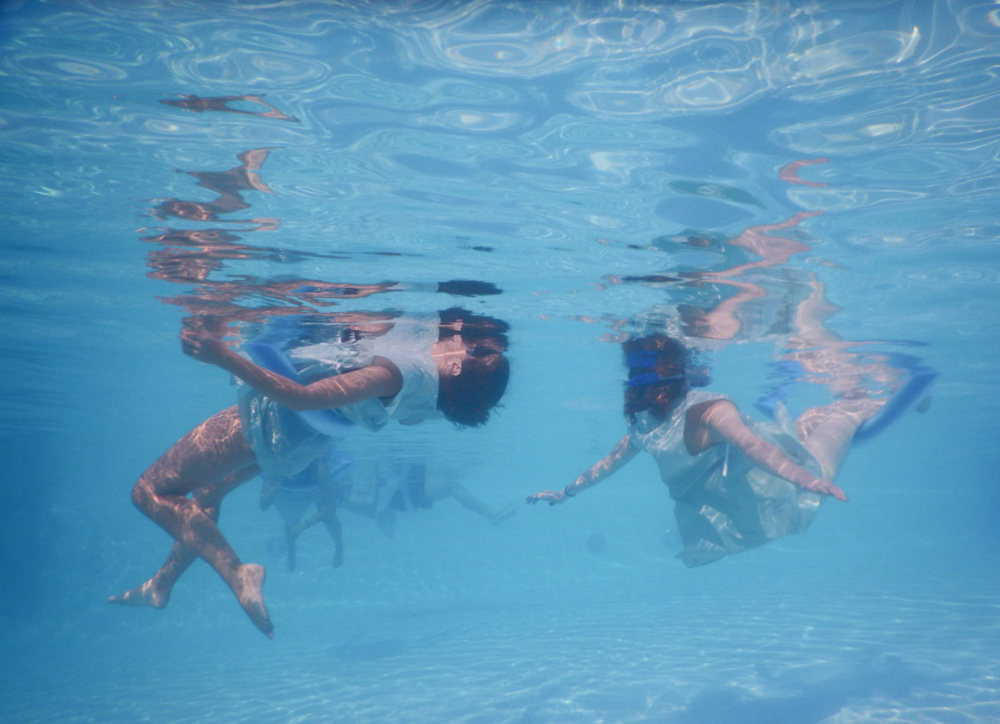 Jillian Mayer’s work explores the collapsing universe between IRL and URL, a world where our data and devices are increasingly part of our physical being. “Technology and our tools shape us,” says Mayer. Her sculpture series, Slumpies, is inspired by the new, and sometimes weird, shapes that our bodies take on when we use our phones. We slouch, we lean back, we throw our arms out for selfies. We know we look ridiculous. We can’t imagine a time, now, when it wasn’t like this. We talked to Mayer about surviving Oregon Trail, hoverboards, and finding private refuge online.

Do you remember your first experience on a computer or the internet?

Not exactly, but I do have memories of dying many times of typhoid fever in Oregon Trail.

My computer in my bedroom did get internet access in 1997. I kept the computer and the keyboard on the floor on the side of my bed, which positioned it as the farthest thing from my bedroom door. While some people place their computers on desks, I felt like mine was in a cave. It was from this cave that I pretended to be everyone I’m not.

All of your art projects deal with technology in some form. What drives this fascination?

I have a keen interest in communication (and control). Technology and our tools shape us, there is no denying that. We innovate to problem solve, to entertain, and to bridge. My fascination lies in see what humans can and will do while here.

Over the course of the past year, there’s been a reckoning with technology: how it’s rewiring us, how it’s perpetuating bias, how it’s disrupting public discourse. Do you feel like it’s more important now to interrogate technology, especially within your own work?

Of course I think it is key to interrogate all new tools which offer enhancement to our civilization.

I remember when text messaging was a new thing and people were wondering if it was going to catch on. I felt that was a ridiculous notion to even consider because people love to communicate. If you provide a new way to communicate, and it’s decent (or better), people will use it.

I have a body of artwork called Slumpies. They are sculptures that are designed for the public person who enjoys looking at their cell phone or tablet, and would also like to engage with art.
That being said, I think there is comedic or perverse way to point towards our shifts (and distractions) with new tech. We know we look ridiculous when we are in a full on phone call with headphones that are wireless, rolling down the street with hoverboards, or vaping. But humans are ridiculous. And if you are really thinking about integrating with technology, most of my favorite adults have metal pieces in them which are keeping them alive. 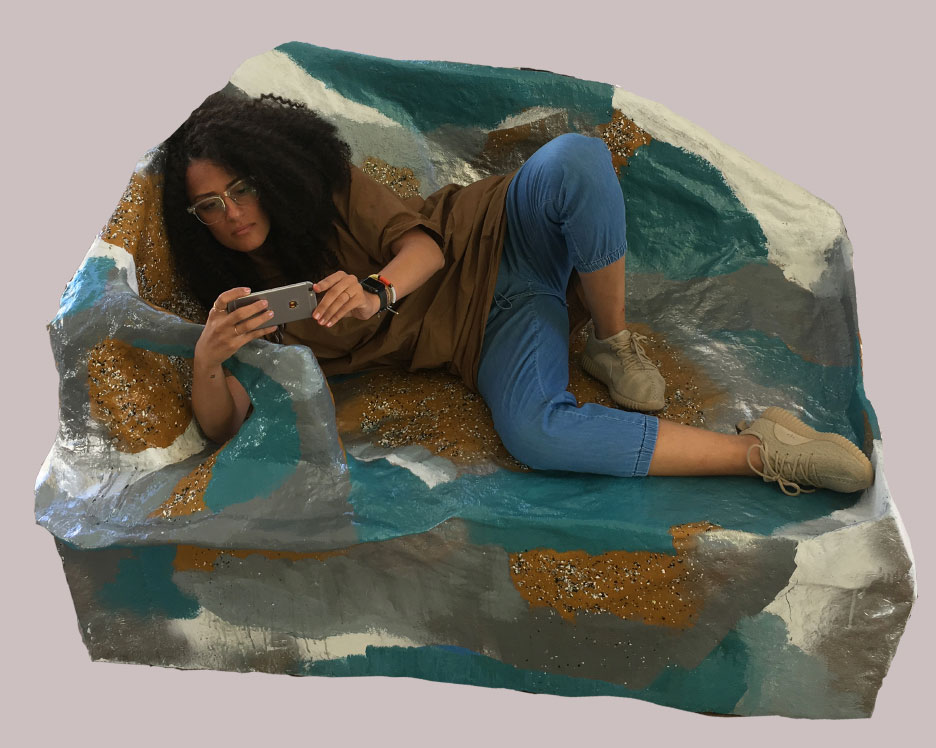 You released an anti-surveillance makeup tutorial in 2013, way before the ubiquity of facial recognition technology, iPhone X, snapchat filters. What made you want to pursue that topic? Did you know how critical (or actually even weirdly practical) it would be?

When I first became aware that people were able to hack others’ computer cameras, that’s when I knew that things were going to get crazy. I take this position that if you can think of something, someone else is already doing it and has your password.Things that I considered speculative sci fi were already happening, but people were not aware.

For me, the Internet feels like the last Wild West (up to this date). It’s the only place (I know of) where you can sort of, log in, code something- and you are that person with some (virtual) property.

So yes, biometrics can be used in the obvious (and complicated) neo-capitalist ways that feed consumer sensibilities (ie. your heart races when you see the shoes you want online, and then are inundated with said shoes on various commercial websites), but it can also tell you if Grandma’s heart rate is sending her into cardiac arrest and simultaneously calling an ambulance. So, I take this position that new technology is great and exciting. But, commercial companies (or those that garner your data for exploitative ways) are usually the groups with the most money to control how it is used. So, that’s complicated.

Of course there is an inherent darkness or fear that comes with normal people engaging in an advanced network controlled by intelligent technologist and coders (and or evil doers), but I also feel that that is why it is so interesting. It is the frontier of data and people are writing it as they go, until…….. AI rewrites it :0)

All that being said, I hope the new sincerity is coming (back (and or)/again).

If you have secrets and make enemies, the internet will likely find out.

So, try and be honest.

Last year, you posted a series of billboards with your own biometric data. Can we truly reclaim ourselves, and our data?

Ok, so in contrast to my last statement, the only way to have any privacy is to introduce incorrect information and have all your data co-exist (online). I lie about certain things in interviews or when I sign-up to websites. At times, the misinformation seems like the only chance for a refuge space.

In my Impressions billboard campaign, I created poetic posts that encouraged people to reclaim themselves. We are aware that our face is our logo and also data for others. So, as companies and networks mine your data, you should or could at least be aware of it, and it’s power.

In my Speak in Code billboard, I am asking viewers to consider forming a type of subculture that can identify a new and harder-to-track method of communication. It seems as if it is all too easy to audio record, hack our webcams, and map our gestures and micro expressions. So, what and who will be able to find the next way for us to speak in privacy in a contemporary state of surveillance? 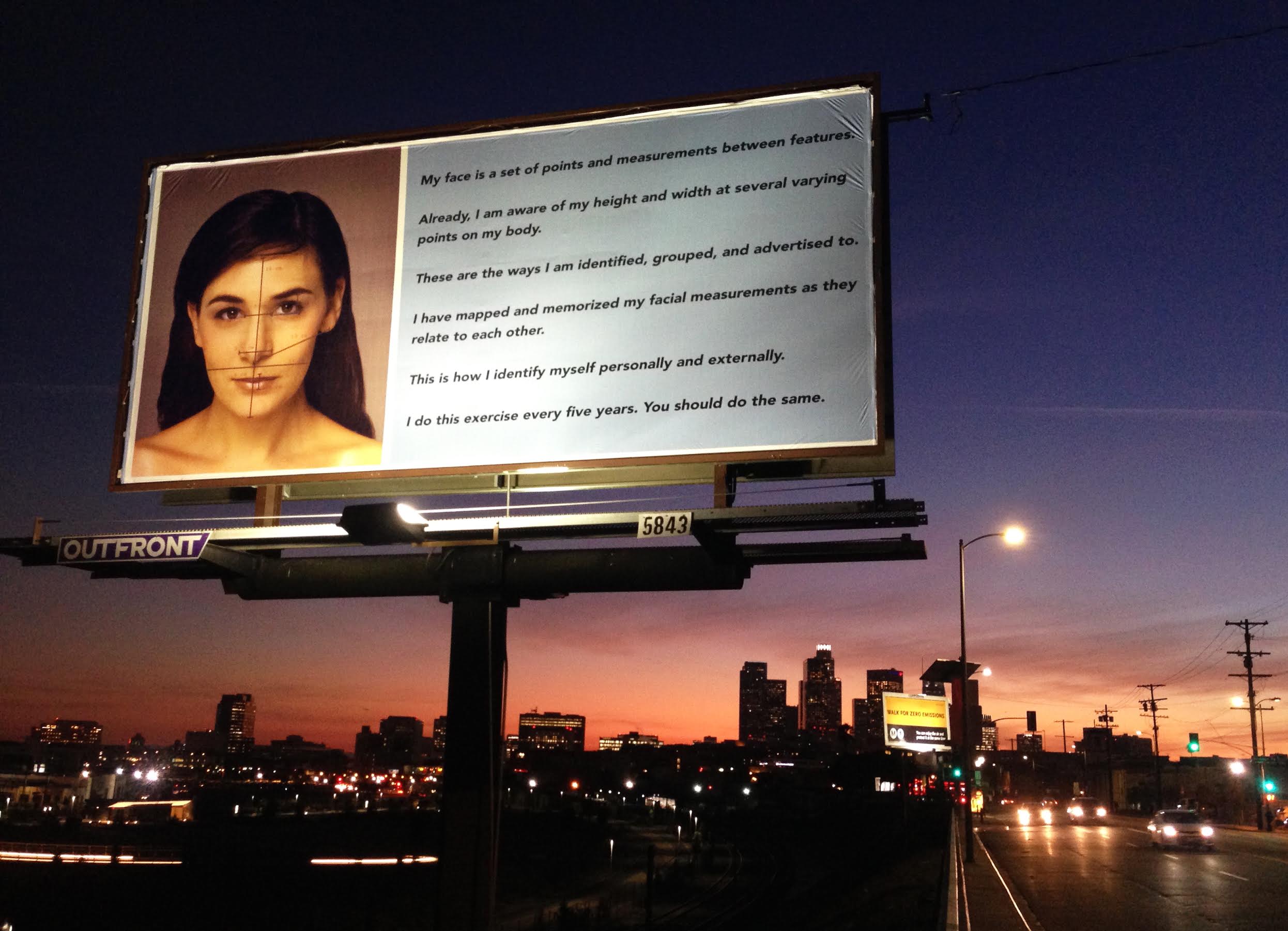 Is there a part of the early internet, or the past internet, that you miss?

Pop-up spokespeople. I hated them at first, but now, I miss them.
I even made a series of work inspired by them.

How do you hope to see our relationship with the Internet evolve or change?

I think it needs to. I’m interested in ethical design for the internet. Yes, I get that it’s corporate interest to have your viewers on your site 24/7 so you can show your advertisement prospects all your traffic, but I am excited that several companies are thinking more responsibly about chronic and extended uses. I remember hearing about young gamers that were getting blood clots and muscular atrophy so several games would put mandatory breaks in their applications. That is being responsible.

Did you know Uber and Lyft drivers and continue driving for hours on end without being cut off by the company? That means someone could drive for 20 hours straight without stopping.

What’s the best thing on the Internet right now?

I think the internet was maybe invented for dissemination of animal photos and videos.

But I also have a deep love for respectful and wholesome memes.