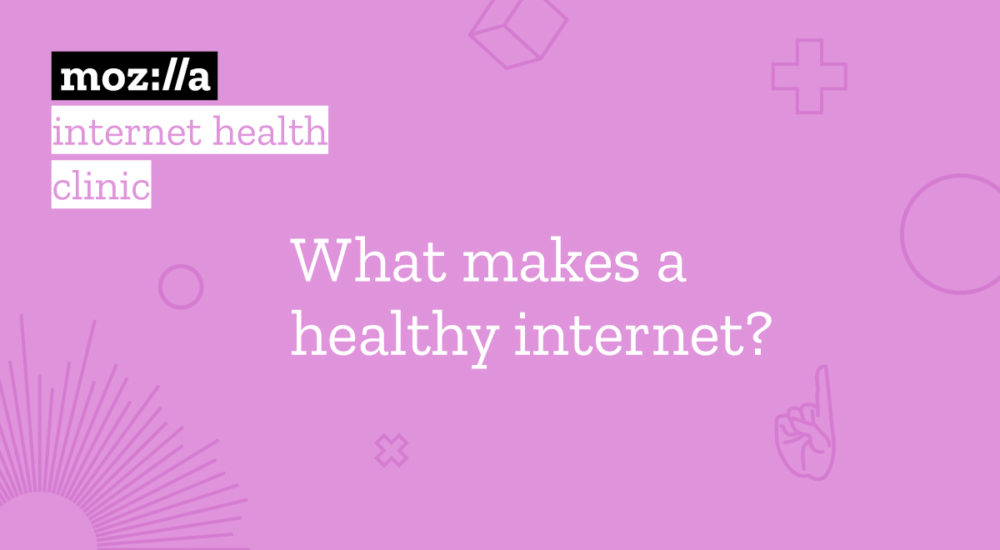 Have you ever wondered if the Internet is healthy? Wouldn’t you love to know if efforts against centralisation, censorship or surveillance are succeeding in making the Internet healthier? How can we not only assess the impact of our actions, but compare and learn from each other?

With the launch of the Internet Health Report, Mozilla has started an open process to document and explain the health of the Internet ecosystem across five issues: Openness, Decentralization, Privacy and Security, Digital Inclusion and Web Literacy.

On Monday, May 8, during the re:publica conference in Berlin, Germany we are bringing the concept to life for the first time in an interactive installation called The Internet Health Clinic.

Visitors will see five “examination tables” (one for each of the issues) where they can learn more. We will be seeking input on ideas for research topics for the Internet Health Report as well as for what actions could contribute to improving global Internet health.

Our partners for this installation are the Global Innovation Gathering (GIG), a network of makers, hackers, founders and innovators from nearly thirty countries. Every hour between 2-5pm, GIG experts and Mozillians will have “visiting hours”. By sharing their research projects and initiatives they will help exemplify “Internet health” across continents.

When and where to find us!

As an ecosystem, the Internet is always evolving and adapting. So must our conversations about Internet health. Are you an engineer, advocate, academic, journalist, maker, or innovator working to improve or advance digital life and freedoms? Then meet us at re:publica 17!

Mozilla’s Internet Health Clinic will open its doors in the Labore:tory building at re:publica on Monday, May 8, 2017 from 12pm to 9pm for walk-ins throughout the day. Open visiting hours with our global experts will be conducted every hour between 2pm to 5pm.

Michelle Thorne leads Mozilla’s Open Internet of Things Studio, a professional learning network committed to making IoT more healthy and open. Together with Peter Bihr, she co-authored the book Understanding the Connected Home, and exhibited in The Good Home Project. Michelle co-founded Zephyr Berlin, a clothing label making pants that look great, perform and travel well, and are built to last for years.

Cathleen Berger currently works with Mozilla where she is leading the organisation’s global engagement. In this position she is responsible for analysing global developments on digital issues, strategizing engagement across different teams, identifying partnerships and ensuring Mozilla’s ongoing presence in international key fora. Previously, she worked within the international cyber policy coordination staff at the German Foreign Office.

Mishi is a technology lawyer and an online civil liberties activist. She is the Legal Director of the New York based Software Freedom Law Center.  At SFLC, Mishi is the primary legal representative of many of the world’s most significant free software developers and non-profit distributors, including Debian, the Apache Software Foundation, and OpenSSL.

In 2010, she founded SFLC.in, since which time she has divided her time between New York and New Delhi. Under her direction, SFLC.in has become the premier non-profit organisation representing the rights of Internet users and free software developers in India.

Martin is a social innovator and specialist in Transmedia for Education and Mobile Learning. He’s Cofounder of Editacuja, develops programmes and projects to access to pervasive and ubiquitous technologies for educational, cultural and social initiatives, integrating communities and schools, training a new generation of teachers, empowering leaders and digital content creators, with the applications of innovative and disruptive technologies. He was recognized by MIT with the TR35 Award, as one of top 10 young innovators in Brazil .

Gilberto Vieira holds a bachelor in Social Communication (2008) and specialises in film and video (2010), he also received a master’s degree in Culture and Territorialities (2015). Gilberto studies the mechanisms and articulations of cultural production in Brazil, uniting citizen policy and empowerment through new technologies, digital tools and artistic creation in production processes. He also analyses tactics developed by young cultural producers in favelas.

Professor Jon Rogers holds a personal chair in creative technology at the University of Dundee and is a senior research fellow at the Mozilla Foundation. His work explores the human intersection between digital technologies and the design of physical things. He balances playful technologies with cultural and societal needs to find new ways to connect people to each other and to their data in an approach that explores not just what is possible but also what is responsible. Jon has a PhD in neural networks from Imperial College London and built up his knowledge while being a tutor and researcher at the Royal College of Art. He is currently based in Berlin’s Mozilla office, working with the Foundation to build the Open IoT Studio.

Achol is a South Sudanese/Canadian, born 1984 in what was then Sudan. In the early stages of the Sudanese civil war she moved to Cuba with her family, where she lived for 8 years before moving to Canada in 1997. In Canada she finished her education earning a B.A in Literature from the University of Alberta. Today, she is working with #defyhatenow, an initiative Mobilising Civic Action Against Hate Speech and Directed Social Media Incitement to Violence in South Sudan, both raising awareness and finding ways to counter this ‘epidemic’.

Solana Larsen is the Editor of Mozilla’s Internet Health Report, an open source project to collect research from different sources to document and explain the health of the Internet. Until a few years ago, Solana was the Managing Editor of Global Voices, an international community of writers, bloggers, translators reporting on citizen media, digital activism and current events in more than a dozen languages. In 2016, she worked with The Web Foundation on the Web We Want.

Pursuing expertise in design, communications and marketing, Denise works for the Open Data Lab Jakarta (a project of the Web Foundation) building, strengthening and implementing communications and engagement strategies. Denise has roots in information design and digital media, a background thoroughly used as she worked several years in the advertising and creative industry.

Esther Ngei is a Kenyan studying Economics at the University of Warsaw in Poland, with interest in Political Economy. Esther is interested in global economy and researching international strategies for technology transfer and cooperation between groups/communities/NGOs in different countries.

Katarzyna is an expert in human rights and technology, and an activist. She is the co-founder and president of Panoptykon Foundation – a Polish NGO defending human rights in surveillance society, with mission to control the controllers. Since 2012 she is also vice-president of European Digital Rights, Board member of Tactical Technology Collective, Amnesty International (Poland) and Coding Rights.

Renata is the Senior Digital Rights Advisor for the World Wide Web Foundation. She is a Guatemalan human rights lawyer and digital rights advocate. Specialising in Intellectual Property and Technology, she works in the intersection between human rights, information, technological change and the power disparities between the Global North and South. As a lawyer in Guatemala, she has represented indigenous victims of genocide and other human rights abuses, including the indigenous leader and Nobel Peace Prize Laureate Rigoberta Menchu Tum, and was a fellow at the Inter-American Court of Human Rights.

Markos Lemma is a techie, activist, and co-founder of iceaddis – a community oriented innovation hub in Ethiopia and co-founder of Glihub – a startup company working on primary education and literacy. He specialised in ICT consultancy and community management. He is also an advocate for startup movements, social and environmental innovations & blogging. Markos is a coordinator on a research program on literacy, a project running by MIT, OLPC & Tufts University with a direct supervision of Nicholas Negroponte, Dr. Cynthia Breazeal & Maryanne Wolf. He organises Barcamp Ethiopia once a year, the biggest tech community event in Ethiopia.

Originally from Canada, Raegan is based in Brussels, Belgium, where she leads Mozilla’s Public Policy work in the EU, and specialises in copyright, net neutrality, privacy and data protection. Prior to joining Mozilla, Raegan established and led Access Now’s Brussels Office. Prior to that, Raegan worked with European Digital Rights (EDRi), an association civil and human rights groups from across Europe.

Dalia Othman is the Gender and Tech project coordinator at Tactical Tech Collective and a Research Affiliate at Harvard’s Berkman Center for Internet and Society. For the past few years, Dalia has been researching online civic engagement in the Arab World, focusing on analysing the Arab Blogosphere and Twitter networks of various countries within the region. She is co-founder of the data storytelling resource site Netstories.org, VecBox, a hackerspace in Palestine.

See you all in Berlin!!

May the 4th Be With Us, Everyone