The next update to Firefox OS is now available to Mozilla partners to implement in smartphones. The update includes several new features including Dual-SIM dual-standby (DSDS) support offering the flexibility of having two separate SIMs, additional camera features and simplified access to the music player and the ability to create unique smart collections of apps.

App developers will be pleased to see the arrival of new platform technologies such as WebGL, asm.js and WebAudio for creating immersive games with great audio effects.

Here are some more highlights from this release:

Dual-SIM dual-standby (DSDS) offers the flexibility of two lines with compatible phones: A highly demanded feature for emerging markets, DSDS now allows people with dual-SIM devices to individually manage two different SIMs for calling, texting or data through the simple “SIM Manager” UI. For example, you might wish to swap between a business and home SIM or if traveling may want to use a local SIM to eliminate roaming charges. It’s also possible to import contacts from each SIM into the device.

Direct access to your music: Several improvements for media apps are in this release including access to music controls in the notifications tray or from the lock screen. The FM Radio app can now also be played through the phone’s loudspeaker. 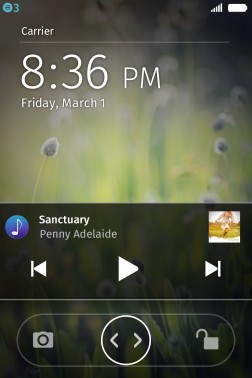 Adaptive app search enhancement: With adaptive app search, you can now also search for apps from the Firefox Marketplace, in addition to the Web, making it easier to find your favorite content.

Smart Collections: Firefox OS automatically groups your apps into smart collections on your homescreen relating to a specific app categories, for example: Social, Games, Music, Showbiz etc. By clicking on one of these categories, lets say gaming, you will see a list of all your installed games and clearly delineated below; a list of suggested new gaming apps you might like to try out. You can also save specific searches that interest you on the homescreen as new smart collections (examples: recipes, sports, news) by tapping the star icon under the search bar.

Improved support for Graphics and Gaming: This update will ship with some great optimizations for games. With WebGL, asm.js and WebAudio support now included, developers will be able to bring superior and engaging gaming experiences to Firefox OS phones.

Experiment with NFC: This update includes NFC enablers starting with the availability of the WebNFC API. Developers will be able to begin experimenting with NFC pairing and tag reading in their apps, with additional NFC functionality coming in futures updates.

Improved Gecko Platform Capabilities with new WebAPIs: This release is based on Gecko 28 and includes several new WebAPIs. Shared workers enable more powerful data processing and resource sharing so developers can write faster applications. Among the new APIs, SpeakerManager gives developers access to the phone’s speaker allowing application such as the FM Radio to be listened to without headphones. The WebIccManager API, which allows support for multiple SIM cards, has also been updated. These new APIs continue to build more functionality and features into the Web for app development.

Audio Streaming with RTSP: We have now built the RTSP streaming framework and have completed support for audio streaming allowing developers to leverage their existing music technologies to target Firefox OS users.

This Firefox OS update is now available for handset manufacturers to deploy to their existing in-market phones and for developer phones.