Browser plugins, especially Flash, have enabled some of our favorite experiences on the Web, including videos and interactive content. But plugins often introduce stability, performance, and security issues for browsers. This is not a trade-off users should have to accept.

Mozilla and the Web as a whole have been taking steps to reduce the need for Flash content in everyday browsing. Starting in August, Firefox will block certain Flash content that is not essential to the user experience, while continuing to support legacy Flash content. These and future changes will bring Firefox users enhanced security, improved battery life, faster page load, and better browser responsiveness.

Over the past few years, Firefox has implemented Web APIs to replace functionality that was formerly provided only by plugins. This includes audio/video playback and streaming capabilities, clipboard integration, fast 2D and 3D graphics, WebSocket networking, and microphone/camera access. As websites have switched from Flash to other web technologies, the plugin crash rate in Firefox has dropped significantly: 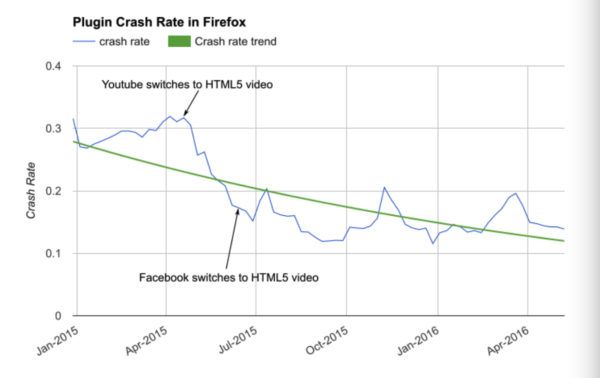 Firefox will continue this trend by blocking specific Flash content invisible to users. This is expected to reduce Flash crashes and hangs by up to 10%. To minimize website compatibility problems, the changes are initially limited to a short, curated list of Flash content that can be replaced with HTML. We intend to add to this list over time.

Later this year, we plan to expand this list to include the use of Flash to check content viewability, a common practice to measure advertising. This will improve Firefox performance and device battery life. We will make this change at the same time Firefox implements the equivalent HTML Intersection Observer API (Firefox bug 1243846) and recommend that content producers currently using Flash to measure viewability adopt this new API as soon as it is available.

In 2017, Firefox will require click-to-activate approval from users before a website activates the Flash plugin for any content. Websites that currently use Flash or Silverlight for video or games should plan on adopting HTML technologies as soon as possible. Firefox currently supports encrypted video playback using Adobe Primetime and Google Widevine as alternatives to plugin video.

We continue to work closely with Adobe to deliver the best possible Flash experience for our users. Our engineering partnership has led to improvements in high-DPI support on Windows, enhanced sandboxing, and an accelerated Flash rendering pipeline that improves performance and stability.

These changes are part of our ongoing efforts to make browsing safer and faster without sacrificing the Web experiences our users love. As we announced last year, Firefox plans to drop support for all NPAPI plugins, except Flash, in March 2017. The next major Firefox ESR (Extended Support Release) release, also scheduled for March, will continue to support plugins such as Silverlight and Java until early 2018, for those users who need more time for their transition.

We are experimenting with many other features and improvements that will make Firefox an even more awesome platform for discovery and collaboration. We welcome your feedback and feature requests.