Today we enabled IonMonkey, our newest JavaScript JIT, in Firefox 18. IonMonkey is a huge step forward for our JavaScript performance and our compiler architecture. But also, it’s been a highly focused, year-long project on behalf of the IonMonkey team, and we’re super excited to see it land.

SpiderMonkey has a storied history of just-in-time compilers. Throughout all of them, however, we’ve been missing a key component you’d find in typical production compilers, like for Java or C++. The old TraceMonkey*, and newer JägerMonkey, both had a fairly direct translation from JavaScript to machine code. There was no middle step. There was no way for the compilers to take a step back, look at the translation results, and optimize them further.

IonMonkey provides a brand new architecture that allows us to do just that. It essentially has three steps:

We’re excited about this not just for performance and maintainability, but also for making future JavaScript compiler research much easier. It’s now possible to write an optimization algorithm, plug it into the pipeline, and see what it does.

With that said, what exactly does IonMonkey do to our current benchmark scores? IonMonkey is targeted at long-running applications (we fall back to JägerMonkey for very short ones). I ran the Kraken and Google V8 benchmarks on my desktop (a Mac Pro running Windows 7 Professional). On the Kraken benchmark, Firefox 17 runs in 2602ms, whereas Firefox 18 runs in 1921ms, making for roughly a 26% performance improvement. For the graph, I converted these times to runs per minute, so higher is better: 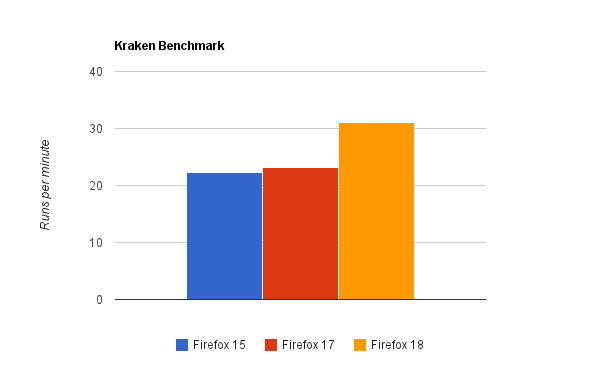 We still have a long way to go: over the next few months, now with our fancy new architecture in place, we’ll continue to hammer on major benchmarks and real-world applications. 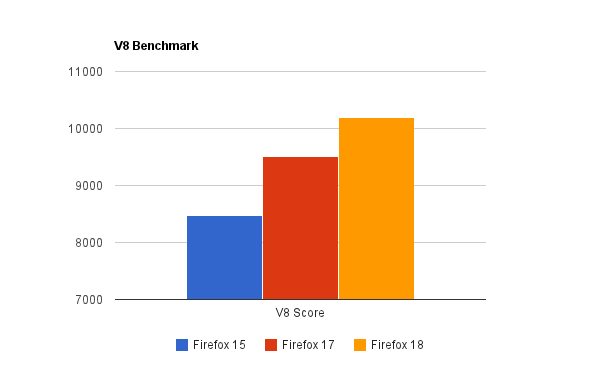 For us, one of the coolest aspects of IonMonkey is that it was a highly-coordinated team effort. Around June of 2011, we created a somewhat detailed project plan and estimated it would take about a year. We started off with four interns – Andrew Drake, Ryan Pearl, Andy Scheff, and Hannes Verschore – each implementing critical components of the IonMonkey infrastructure, all pieces that still exist in the final codebase.

In late August 2011 we started building out our full-time team, which now includes Jan de Mooij, Nicolas Pierron, Marty Rosenberg, Sean Stangl, Kannan Vijayan, and myself. (I’d also be remiss not mentioning SpiderMonkey alumnus Chris Leary, as well as 2012 summer intern Eric Faust.) For the past year, the team has focused on driving IonMonkey forward, building out the architecture, making sure its design and code quality is the best we can make it, all while improving JavaScript performance.

It’s really rewarding when everyone has the same goals, working together to make the project a success. I’m truly thankful to everyone who has played a part.

Over the next few weeks, we’ll be blogging about the major IonMonkey components and how they work. In brief, I’d like to highlight the optimization techniques currently present in IonMonkey:

Of particular note, I’d like to mention that IonMonkey works on all of our Tier-1 platforms right off the bat. The compiler architecture is abstracted to require minimal replication of code generation across different CPUs. That means the vast majority of the compiler is shared between x86, x86-64, and ARM (the CPU used on most phones and tablets). For the most part, only the core assembler interface must be different. Since all CPUs have different instruction sets – ARM being totally different than x86 – we’re particularly proud of this achievement.

IonMonkey is enabled by default for desktop Firefox 18, which is currently Firefox Nightly. It will be enabled soon for mobile Firefox as well. Firefox 18 becomes Aurora on Oct 8th, and Beta on November 20th.

* Note: TraceMonkey did have an intermediate layer. It was unfortunately very limited. Optimizations had to be performed immediately and the data structure couldn’t handle after-the-fact optimizations.