One thing it doesn’t support is doing diffs between separate runs. Until now, that is! Thanks to work done by Eric Rahm, it’s now possible to download the data for each snapshot done during a run. This file can then be loaded in about:memory. It’s also possible to download the data for two snapshots and diff them in about:memory. Yay! This diff workflow isn’t super slick, as it requires the downloading of two files and then the loading of them in about:memory. But it’s a lot better than manually eyeballing two sets of data in two separate AWSY tabs, which was the best we could do previously. Furthermore, AWSY and about:memory already duplicate some functionality, and this implementation avoids increasing the amount of duplication.

To do the export, select a single run (zooming in on the graph appropriately) and click on the red “[export]” link next to the appropriate snapshot, as seen in the following screenshot. 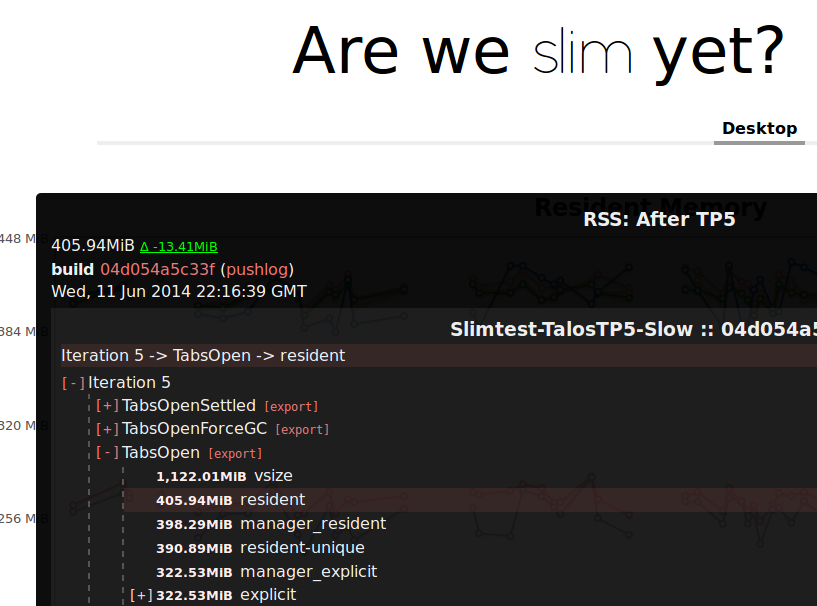 This is a first step towards improving AWSY so that it can detect memory usage regressions with much higher sensitivity than it currently has.

One reply on “areweslimyet.com data is now exportable and diffable”

Also congratulations to anyone who is responsible for the recent downward trend!
Especially the ~8M win for JS.