CRLite is a technology to efficiently compress revocation information for the whole Web PKI into a format easily delivered to Web users. It addresses the performance and privacy pitfalls of the Online Certificate Status Protocol (OCSP) while avoiding a need for some administrative decisions on the relative value of one revocation versus another. For details on the background of CRLite, see our first post, Introducing CRLite: All of the Web PKI’s revocations, compressed.

To discuss CRLite’s design, let’s first discuss the input data, and from that we can discuss how the system is made reliable.

That’s a lot of moving parts, but let’s inspect them one by one. 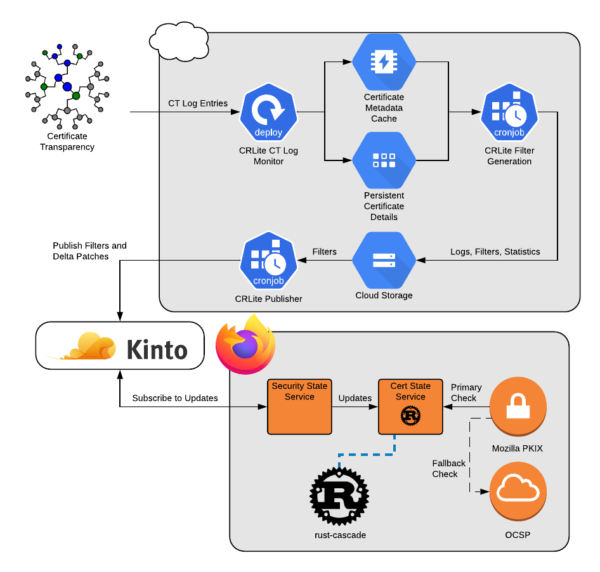 Figure 1: CRLite Information Flow. More details on the infrastructure will be in Part 4 of this blog post series.

Four times per day, all website certificates that haven’t reached their expiration date are processed, drawing out lists of their Certificate Authorities, their serial numbers, and the web URLs where they might be mentioned in a Certificate Revocation List (CRL).

All of the referenced CRLs are downloaded, verified, processed, and correlated against the lists of unexpired website certificates. 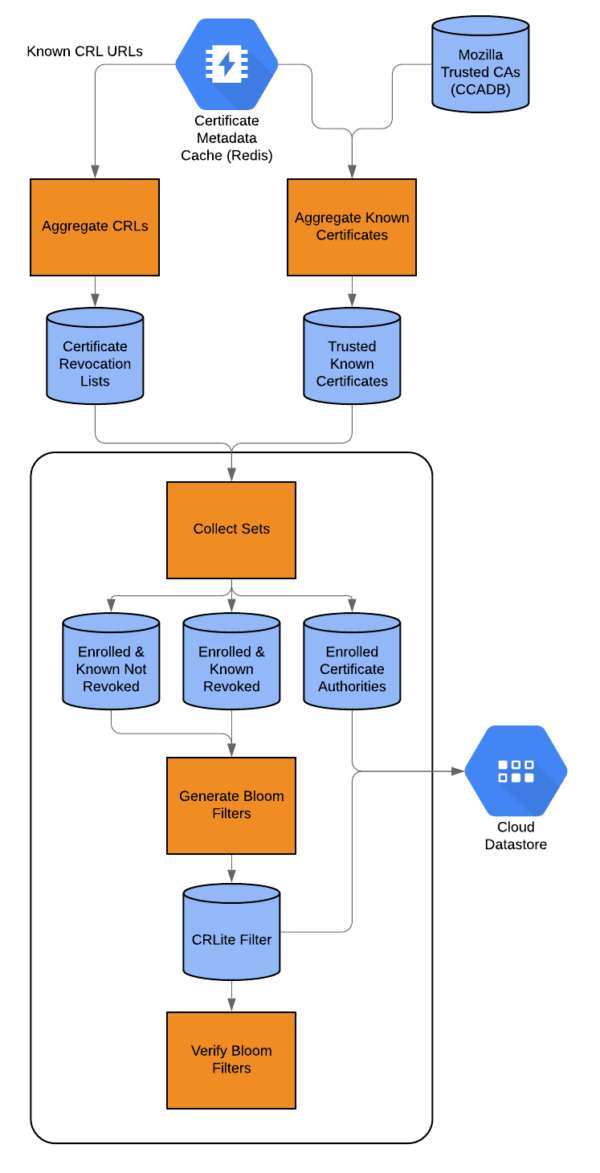 With this knowledge, we can build a CRLite Filter.

Structure of A CRLite Filter

CRLite data comes in the form of a series of cascading Bloom filters, with each filter layer adding data to the one before it. Individual Bloom filters have a certain chance of false-positives, but using Certificate Transparency as an oracle, the whole Web PKI’s certificate corpus is verified through the filter. When a false-positive is discovered, the algorithm adds it to another filter layer to resolve the false positive. 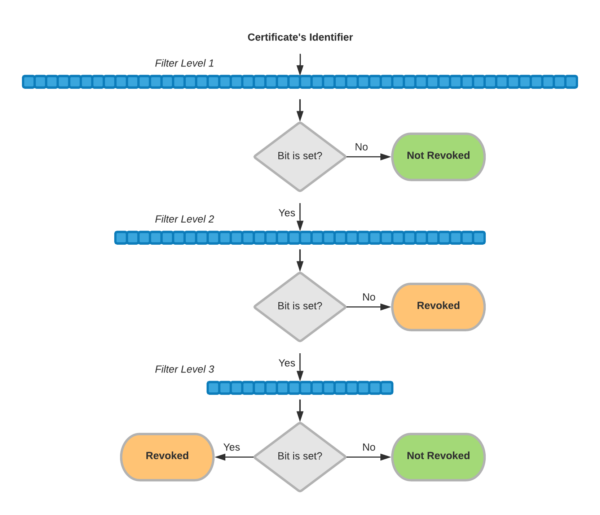 The certificate’s identifier is defined as shown in Figure 4:

For complete details of this construction see Section III.B of the CRLite paper.

After construction, the included Web PKI’s certificate corpus is again verified through the filter, ensuring accuracy at that point-in-time.

A CRLite filter is accurate at a given point-in-time, and should only be used for the certificates that were both known to the filter generator, and for which there is revocation information.

We can know whether a certificate could be included in the filter if that certificate has delivered with it a Signed Certificate Timestamp from a participating Certificate Transparency log that is at least one Maximum Merge Delay older than our CRLite filter date.

If that is true, we also determine whether the certificate’s issuer is included in the CRLite filter, by referencing our preloaded Intermediate data for a boolean flag reporting whether CRLite includes its data. Specifically, the CA must be publishing accessible, fresh, verified CRL files at a URL included within their certificates’ Authority Information Access data. This flag is updated with the same cadence as CRLite itself, and generally remains constant.

Today, Firefox Nightly is using CRLite in telemetry-only mode, meaning that Firefox will continue to rely on OCSP to determine whether a website’s certificate is valid. If an OCSP response is provided by the webserver itself — via OCSP Stapling — that is used. However, at the same time, CRLite is evaluated, and that result is reported via Firefox Telemetry but not used for revocation.

At a future date, we will prefer to use CRLite for revocation checks, and only if the website cannot be validated via CRLite would we use OCSP, either live or stapled.

Firefox Nightly has a preference security.pki.crlite_mode which controls CRLite; set to 1 it gathers telemetry as stated above. Set to 2, CRLite will enforce revocations in the CRLite filter, but still use OCSP if the CRLite filter does not indicate a revocation.  A future mode will permit CRLite-eligible certificates to bypass OCSP entirely, which is our ultimate goal.

Only public CAs within the Mozilla Root Program are eligible to be included, and CAs are automatically enrolled when they publish CRLs. If a CA stops publishing CRLs, or problems arise with their CRLs, they will be automatically excluded from CRLite filters until the situation is resolved.

As mentioned earlier, if a CA chooses not to log a certificate to a known Certificate Transparency log, then CRLite will not be used to perform revocation checking for that certificate.

Ultimately, we expect CAs to be very interested in participating in CRLite, as it could significantly reduce the cost of operating their OCSP infrastructure.

The list of CAs currently enrolled is in our Intermediate Preloading data served via Firefox Remote Settings. In the FAQ for CRLite on Github, there’s information on how to download and process that data yourself to see what CAs revocations are included in the CRLite state.

Notably, Let’s Encrypt currently does not publish CRLs, and as such their revocations are not included in CRLite. The CRLite filters will increase in size as more CAs become enrolled, but the size increase is modeled to be modest.

Portion of the Web PKI Enrolled

Currently CRLite covers only a portion of the Web PKI as a whole, though a sizable portion: As-generated through roughly a period covering December 2019, CRLite covered approximately 100M certificates in the WebPKI, of which about 750k were revoked. 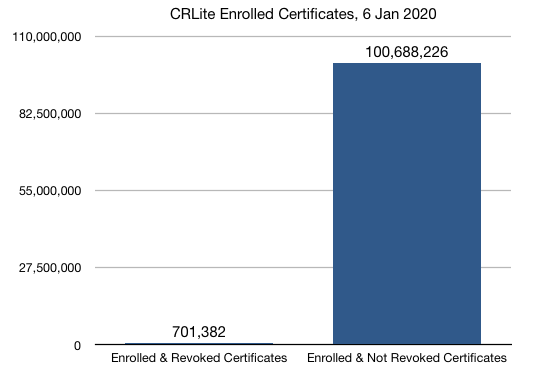 Figure 5: Number of Enrolled Revoked vs Enrolled But Not Revoked Certificates

The whole size of the WebPKI trusted by Mozilla with any CRL distribution point listed is 152M certificates, so CRLite today includes 66% of the potentially-compatible WebPKI  [Censys.io]. The missing portion is mostly due to CRL downloading or processing errors which are being addressed. That said, approximately 300M additional trusted certificates do not include CRL revocation information, and are not currently eligible to be included in CRLite. 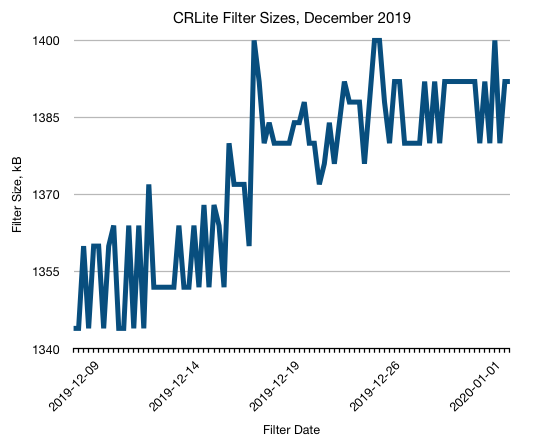 Figure 6: CRLite Filter Sizes over the month of December 2019 (in kilobytes)

To ensure freshness, our initial target was to produce new filters four times per day, with Firefox users generally downloading small delta difference files to catch-up to the current filter. At present, we are not shipping delta files, as we’re still working toward an efficient delta-expression format. 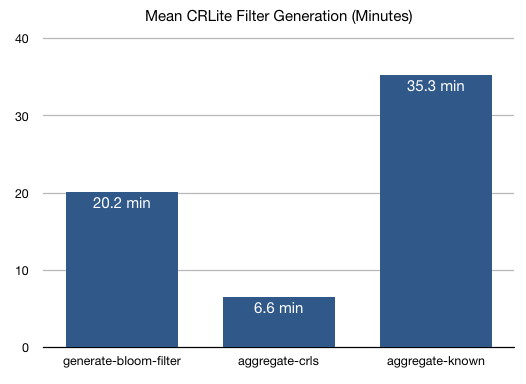 For the most part, faster disks and more efficient (but not human-readable) file formats would speed this process up, but the current speeds are more than sufficient to meet our initial goals, particularly while we continue improving other aspects of the system.

Our next blog post in this series, Part 3, will discuss the telemetry results that our current users of Firefox Nightly are seeing, while Part 4 will discuss the design of the infrastructure.