I think I’m missing something. How do people get those changeset URLs to paste into bugs? Ok, if I’m landing on mozilla-central or a project branch, I just get it from tbpl since I’ll be staring at it anyway. But what about some other repo? Like, say, ssh://hg.mozilla.org/users/mstange_themasta.com/tinderboxpushlog?

As usual, I coded my way around the problem before asking the question, which is stupid and backwards. But just in case there really isn’t a good way, here’s my silly hackaround. Put this in the [alias] section of your ~/.hgrc then, after landing a change, do ‘hg urls -l 3’ or similar. (That’ll give you the latest 3 changesets):

Picking that apart, it removes the misfeature that $HG_ARGS contains the command you’re running, then passes the remaining command line to hg log with a template set to just print out the changeset shorthash and the first line of the commit message. It sends that and the URL of the default upstream repo through a perl command that rewrites the hg log output to “

A mess, but it works for me.

And yes, I should switch to a blog that isn’t hostile to code. Sorry about that line up there.

I often like to split patches up into independent pieces, for ease of reviewing by both reviewers and myself. You can split off preparatory refactorings, low-level mechanism from high-level users, features from tests, etc., making it much easier to evaluate the sanity of each piece.

But it’s something of a pain to do. If I’ve been hacking along and accumulated a monster patch, with stock hg and mq I’d do:

and on and on. It’s a major pain. I even started working on a web-based patch munging tool because I was doing it so often.

Then I discovered qcrecord, part of the crecord extension. It is teh awesome with a capital T (and A, but this is a family blog). It gives you a mostly-spiffy-but-slightly-clunky curses (textual) interface to select which files to include, and within those files which patch chunks to include, and within those chunks which individual lines to include. That last part, especially, is way cool — it lets you do things that you’d have to be crazy to attempt working with the raw patches, and are a major nuisance with the raw files.

Assuming you are again starting with a huge patch that you’ve been qreffing, the workflow goes something like:

Now that you have a nicely split-up patch series, you’ll be wanting to edit various parts of it. As usual with mq, you qpop or qgoto to the patch you want to hack on, then edit it, and finally qref (qrefresh). But many times you’ll end up putting in some bits and pieces that really belong in the other patches. So if you were working on my-patch-part2 and made some changes that really belong in my-patch-part3, you do something like:

or at least, that’s what I generally do. If I were smarter, I would use qcrecord to pick out the remaining updates for part2, making it just:

but that’s still a mess. The fundamental problem is that, as great as qcrecord is, it always wants to create a new patch. And you don’t.

Enter qcrefresh. It doesn’t exist, but you can get it by replacing your stock crecord with

Update: it has been merged into the main crecord repo! Use

It does the obvious thing — it does the equivalent of a qrefresh, except it uses the crecord interface to select what parts should end up in the current patch. So now the above is:

Still a little bit of juggling (though you could alias the latter 3 commands in your ~/.hgrc, I guess.) It would be nice if qfold had a “reverse fold” option.

Finally, when splitting up a large patch you often want to keep the original patch’s name and comment, so you’d really do:

And life is good.

This was originally a post to the monster thread “Data and commit rules” on dev-planning, which descended from the even bigger thread “Proposing a tree rule change for mozilla-central”. But it’s really an independent proposal, implementable with or without the changes discussed in those threads. It is most like Ehsan’s automated landing proposal but takes a somewhat different approach. 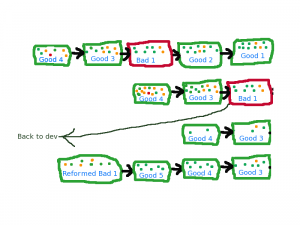 To deal with needs-clobber, you can set that as a flag on a push when queueing it up. (Possibly on your second try, when you discover that it needs it.)

mozilla-central doesn’t actually need to do builds, since it only gets exact tree versions that have already passed through a full cycle.

On a perf regression, you have to queue up a backout through the same mechanism, and your life kinda sucks for a while and you’ll probably have to be very friendly with the Try server.

Project branch merges go through the same pipeline. I’d be tempted to allow them to jump the queue.

You would normally pull from mozilla-pending only to queue up landings. For development, you’d pull mozilla-central.

Alternatively, mozilla-central would pull directly from the relevant changeset on mozilla-pending, meaning it would get all of the backouts in its history. But then you could use mozilla-pending directly. (You’d be at the mercy of pending failures, which would cause you to rebase on top of the resulting backouts. But that’s not substantially different from the alternative, where you have perf regression-triggered backouts and other people’s changes to contend with.) Upon further reflection, I think I like this better than making mozilla-central’s history artificially clean.

The major danger I see here is that the queue can grow arbitrarily. But you have a collective incentive for everyone in the queue to scrutinize the failures up at the front of the queue, so the length should be self-limiting even if people aren’t watching their own pushes very well. (Which gets harder to do in this model, since you never know when your turn will come up, and you’re guaranteed to have to wait a whole build cycle.)

You’d probably also want a way to step out of the queue when you discover a problem yourself.

Did I just recreate Ehsan’s long-term proposal? No. For one, this one doesn’t depend on fixing the intermittent orange problem first, though it does gain from it. (More good pushes go through without waiting on human intervention.)

What’s the justification for this? Well, if you play fast and loose with assumptions, it’s the optimal algorithm for landing a collection of unproven changes. If all changes are good, you trivially get almost the best pipelining of tests (the best would be spawning builds immediately). With a bad change, you have to assume that all results after that point are useless, so you have no new information to use to decide between the remaining changes. There are faster algorithms that would try appending pushes in parallel, but they get more complicated and burn way more infrastructural resources. (Having two mozilla-pendings that merge into one mozilla-mergedpending before feeding into mozilla-central might be vaguely reasonable, but that’s already more than my brain can encompass and would probably make perf regressions suck too hard…)

Side question: how many non-intermittent failures happen on Windows PGO builds that would not happen on (faster) Windows non-PGO builds?