Firefox 3.5 makes it super simple to discover the location of a user on your website  You can read more about it from Doug Turner or the official Mozilla page, but today I want to look at how to use the new API.

The following image is a screenshot of geolocation plus Google maps. If you’re running Firefox 3.5, we’ll replace that with a real map showing your current position. 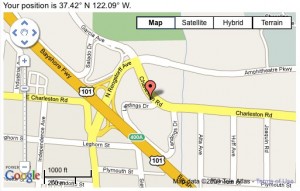 Geolocation finding me at the Mozilla office.

First, we should check that the browser supports the Geolocation API:

Now that we’ve cleared out the riff-raff we can dive in to the new feature:

I love the simplicity of this API; that’s all you need to know to get the user’s position! To do something useful, we’ll need a function to handle a successful positioning call:

Since it takes a few seconds to gather location data and send it up to the geolocation services, we must use an asynchronous callback instead of a return value.

The Position object has two fields: timestamp and coords. position.coords holds all the position and velocity information, with the two most interesting (on my stationary desktop) being latitude and longitude. The motion information will be a lot more fun on mobile devices, especially in conjunction with navigator.geolocation.watchPosition.

This blog goes over the most basic usage of the geolocation API, but I have a slightly more involved example available at http://people.mozilla.com/~jbalogh/geo.html. If you view the source you can check out geolocation, -moz-border-radius, and -moz-box-shadow in action.

NOTE: due to a bug in the current Firefox 3.5b4, the geolocation services may fail on repeated calls. The bug has been fixed, but we’re stuck with it in the current release.