During the Firefox 3.5 launch, Daniel Einspanjer and Dave Dash put together a neat little stats counter at downloadstats.mozilla.com. We decided to do a sprint to try integrating this with mozilla.com to give it a proper home.

Historically, we’ve had different ways to track new releases and their downloads:

Blast from the past – Jeremy Orem’s Firefox 3.0 stats page: 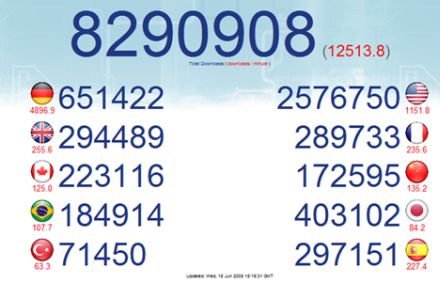 As a part of our renewed efforts to innovate more rapidly on mozilla.com, our first sprint brings download information to mozilla.com. From release to release we hope this page changes in exciting new ways. In the meantime, it’ll have a nicer place to live.

The idea was pretty simple:

The end result is a nicely sized update to mozilla.com that we were able to finish in two weeks. Publishing our totals gives new users a feel of activity and freshness, and funnels them to a statistics page that we can always expand later.

Here’s a widget on the personalize Firefox page:

Here’s the main sections from the main stats page:

We hope you like the small changes we made, and if you have ideas on how to make this better, please let us know! If you’d like to play with these feeds, you can find them here: