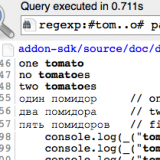 DXR, Mozilla’s evolving codebase search engine, has been taking patches at a furious rate these last two months. A great deal of work has gone into a UI refit, still in progress, which will improve discoverability, consistency, and power. Meanwhile, we have kept pushing more immediately enjoyable enhancements into production.

Cleaning Out The Pipes

One of these is a complete rewrite of our HTML generation pipeline. DXR pulls metadata about code from a number of disparate sources: syntax coloring from Pygments, locations of functions and macros from clang, links to Bugzilla bugs from a glorified regex. It then encodes those as begin-end pairs of text offsets, which it stitches together to make the final markup. However, the stitching was previously handled by a teetering state machine, stuffed info a single monolithic function with zero test coverage, replete with terrible mystery. As it turned out, it had been generating grossly invalid markup for some time. Fortunately, modern browsers are equally replete with terrible mystery and managed to make some semblance of sense out of things like </a></a></a>.

But now that’s gone away. The rewrite brings…

And, perhaps most importantly in the long term, it modernizes our plugin contract by supporting annotation regions which overlap. This lets us enjoy truly decoupled plugins which no longer have to care if they’re used with others that emit overlapping regions. We can add plugins that support more languages and more types of analysis without having to worry about whether they’ll play nicely with the existing ecosystem. It also makes development of plugins outside the DXR codebase more practical.

Other user-visible improvements include…

Thanks to James Abbatiello for lots of analysis improvements, Nick Cameron for the handy line-number search and syntax coloring, jonasac for several great fixes, and Schalk Neethling for a huge amount of work toward getting the UI refit out the door. If you’d like to join the DXR hacking community, we’ve got a nice ramp-up paved out for you and some easy bugs tagged.

As for the upcoming UI refit, there’s plenty in store:

Check out our mockups and our sometimes-broken staging site, and do keep the feedback coming. All of the above work was motivated by the comments you’ve already given us.