Let me tell you a story.

A few month ago, on the MDN mailing list we had an interesting but highly controversial discussion: How to improve our code samples on MDN? As part of our Learning Area project, we came to the conclusion that our code samples need some improvements. Especially, we thought that providing a live interactive interface to play with the code would be a nice improvement. The discussion around that single feature just exploded: everybody coming with their pet project to explain how cool that would be to use it. Lot of passion, lot of strong beliefs. It was impossible to get any consensus or neutral point. We were in a dead end.

Even though the discussion took place on a public mailing list, only a handful of web experts and Mozilla employees were part of it. We felt like our community was put aside! So in order to get a more clean view of what was needed for the community of MDN users, we decided to ask them more directly. We simply designed a survey and asked them what they though about MDN code samples and some various way to improve them. And that was the right move… full of (good) surprises.

We advertised the survey directly on MDN with a banner at the top of each page for 3 weeks between May and June. And what a surprise, we got 950 answers! That was seriously unexpected. We would have been more than happy with 100 answers. But instead we get a true representative samples of MDN users: from beginners to experts, from occasional readers to regular contributors. Awesome! It took a while to dig into all the answers but it was worth it. 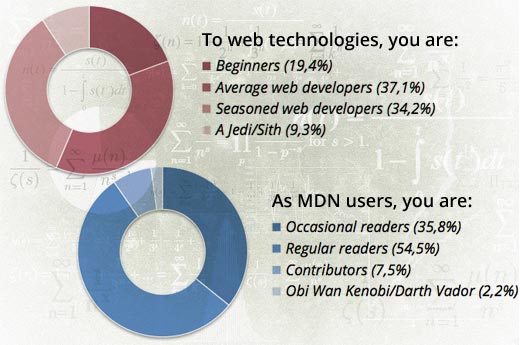 It was worth it because we got some very unexpected answers. The biggest blast was that MDN users were mostly unaware that it’s possible to simply contribute code samples on MDN. We assume so much that everybody knows MDN is a wiki that we forget it is not that obvious. So our first move will be to push harder on communication around that fact.

When it comes to improvement, again we got a very big surprise. Our code samples are considered rather good so what is the most wanted feature MDN users want to make their experience even better? Live editable code? Sharing ability through GitHub or Codepen.io? Nope! Even if they rate those features quite high, it’s far away from THE killer feature: They want code samples nicely formatted all across MDN. No kidding — it’s more important to have clear and nice code samples than complicated toy features. Simple is beautiful; we have to make sure it remains that way.

And this is consistent with the answers we got about things that could encourage contribution (beyond promoting that it’s possible to contribute). We were assuming that contributors would wish to use GitHub, Gist, JSFiddle, codepen.io, and the like as contribution points to MDN code samples (because those tools’ code contribution workflow is way more advanced and accurate than MDN). Well, again, we assumed wrong; the most wanted feature is a tool to automatically format code samples to follow MDN code style guide. MDN contributors don’t want to use third party tools; they mostly prefer that we improve the contribution workflow on MDN.

So in the end we learn quite a lot by directly asking our community. It was so helpful and accurate that we plan to do this more often. It also pushed us (MDN staff and core contributors) to rethink our assumptions regarding MDN, and it is a good thing, which could be summarized as: “Don’t assume, ask”. By creating that sort of bridge between casual users and core contributors, we will make sure MDN remains a place for everybody. Inclusiveness is not a myth but it requires making sure everybody’s voice is heard, one way or another.

If you are interested in the full results, the digest is available in PDF and the raw data are available as a Google Spreadsheet.