The Mozilla Community had a huge role in the Firefox 10 campaign. Mozilla is different. We’re not a traditional software company. We’re a global, non-profit community rallying behind a shared mission to promote openness, innovation and opportunity online. We like to do things offline as well, and what follows is an account of what happened recently in four cities (Berlin, Hyderabad, Rio, and San Francisco) around the world.

This was truly a collaborative effort of Mozillians working together to pull off something great. Thanks to the folks behind the scenes that made things happen. To name a few: Kristin Baird, Jessica Osorio, TJ Lee and Francisco Picolini. Thanks to the supporting cast of dozens who turned out to help on the day. Thanks to the team leads who handled logistics ‘on the ground’ before and during, here are their stories.

[By Michael Kohler] We met at the Berlin office at 9am to hop on the bus and drive through Berlin and stop at popular places to shoot photos with strangers and tell them about Firefox. Our designated driver was a great help, he knew the city very well we didn’t lose time searching for a location. Konstantina instantly changed into the Fox costume once we arrived at the main station in Berlin.

As we talked to people at the main station we quickly figured out that we will need more help at “Brandenburger Tor” and Rosana told every employee in Berlin to join us if time permits it. Because of this we could manage the demand of pictures and questions at the most popular place in Berlin. Thanks to Madalina, John, Romain and Freddy for joining us in this important mission. We greatly appreciated to have support from the employees. At the “Brandenburger Tor” there were many kids which really enjoyed the costume and the stickers. 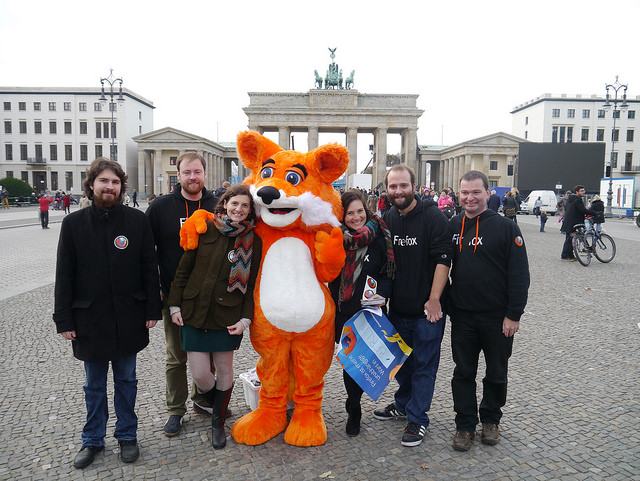 Later on at our stop at the “Siegessäule”, Michelle and Mario Behling joined us and Mario instantly saw that we need to have some interviews. With his perfect language experience he could do interviews in German, English, French and Italian. All these interviews were recorded by our amazing videographer! We had a lot of fun talking to people about Firefox and shooting pictures. From there went to Alexanderplatz since a lot of people cross this area after work or doing sightseeing in Berlin. Madalina did a great job in the costume in the afternoon and never failed to impress people with it. 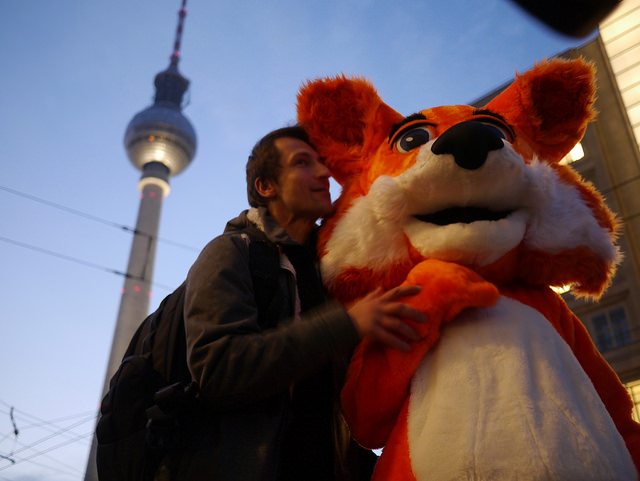 In the evening we went back to the office where Martyna has organized an incredible party and even managed to get the most beautiful Firefox cake in Berlin! 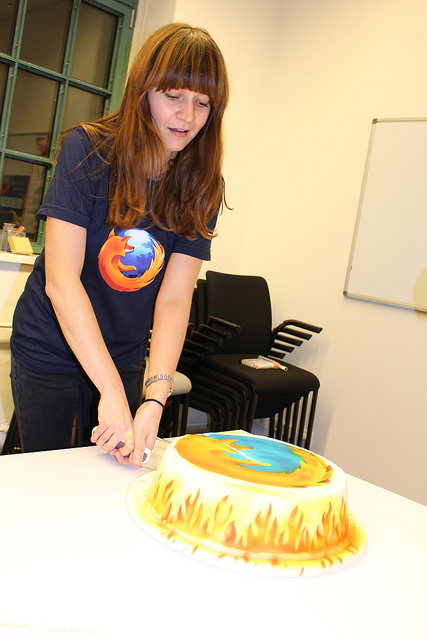 Martyna cutting the cake – picture by Mario Behling on Flickr

Through the whole day we talked to about 1500 people. Most of them already knew Firefox but we also meet quite a few who didn’t know about it. Also we could educate some of them about the advantages of using an independent, non-compromised browser. Obviously we also talked about Mozilla’s mission and generally got very good feedback on it. We couldn’t have done this without all the help we got, thanks to everyone who helped out! Also Hagen (Mozilla Rep) was as important, perfectly assisting me in the last-minute planning phase the night before, shooting pictures and uploading a lot of them to Twitter while being on the bus. 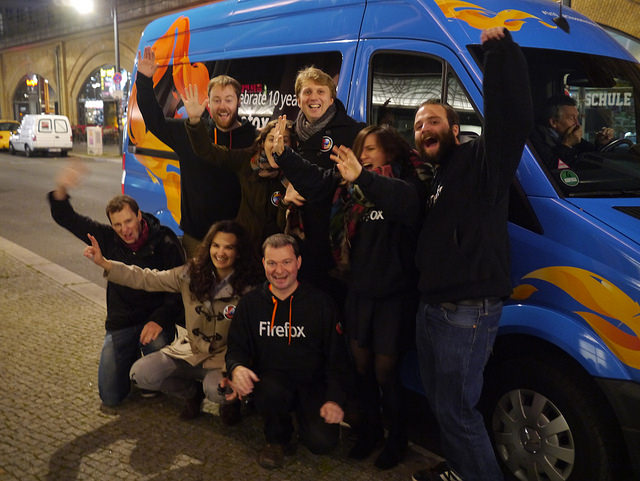 [By Srikar Anathula] “With time, we build. With time, we spread. With time, we celebrate.“. The same with Mozilla Firefox. For the last 10 years, We have crossed many hurdles, fixed many bugs (well, i wanted to sound deep) and today we stand tall. We stand with pride. We stand with respect. Privacy was, is and will be our first priority. Having said that, Foxy got spread all around the world and that brings us to the “celebration” part.

People ask us what have we done for #fx10?” . Well, trust me we have done many things on “November 9th, 2014”. We’ve gained a lot of experience, and we spread the word about Firefox.

To begin with, All the Mozillians in and around Hyderabad reached “Collab House” in the morning and waited for the #fx10 bus to come. Meanwhile we were dancing with the fox and I’m sure the day started with lot of energy and joy. You can find Foxy, me and the rest dancing to the beats here. As the bus arrived we had to get serious and we did and and… I forgot, the bus. Picture. Wait! 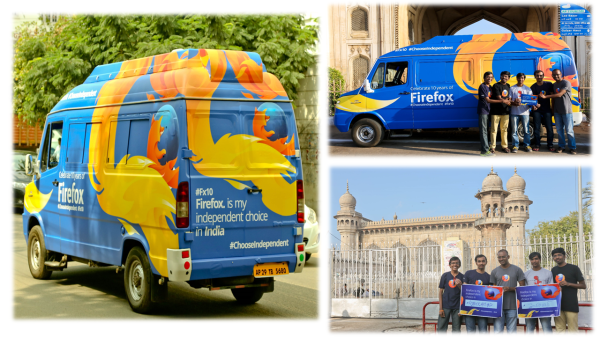 We went to many places on that day. From Golconda Fort, a historic monument to Hitech City, a technology township. From Charminar, a monument and Mecca Masjid mosque to Necklace road, a Boulevard. Through out the whole day we visited different places, stopped at different locations , talked to thousands of people. Most of them knew about Mozilla Firefox. We talked about Mozilla Mission, educated people on why should they use the browser? We learned , we taught and in the end, we had fun with cake cutting at Necklace road. 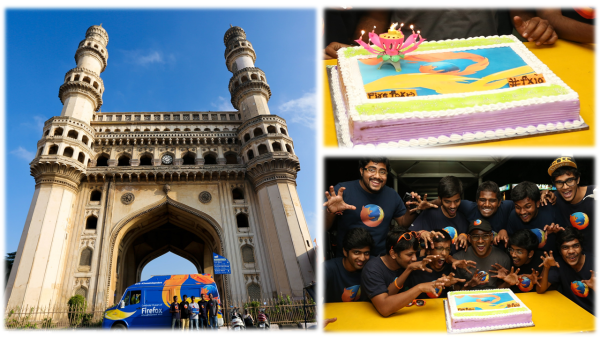 Props to the crew members. This wouldn’t be successful without all the help we got, thanks to everyone who helped out! We were live tweeting the pictures and schedule while being on the bus. We met many people on that day. From a Regular worker, who uses Firefox(Thanks to his daughter who taught him) to a Corporate Employee, who contributes to Firefox-Dev in his free time. From a Kid, who likes Firefox because of the cute icon to my mom, who uses Firefox to watch daily soaps online.

[by Morvana Bonin] On November 10th of 2004, Firefox was born. On that day it’s first version was released and brought with it a revolution with a different and innovative approach relative to it’s time. Firefox was born from Mozilla’s mission to build an internet for everyone and was created and projected so that users like you and me could access and utilize something that was conceived with us in mind, respecting our liberty and privacy. And that’s why we celebrated on November 10th 2014 Firefox’s 10 years anniversary. 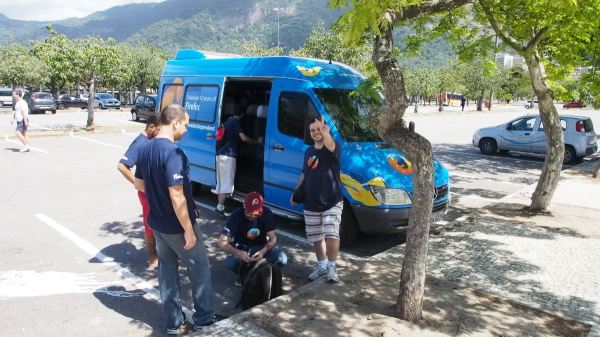 Prepping the bus under the Rio sun

With that spirit in mind, 4 cities were chosen and 4 minivans drove around those cities with enthusiasm and excitement carrying volunteers that tried to convey what Firefox represented, something that goes beyond than a browser. They showed people that using Firefox means having greater freedom. Our minivan in Rio went through several touristic points such as Lagoa, Ipanema, Copacabana and finally URCA. We took some pictures with people from many different states and countries. 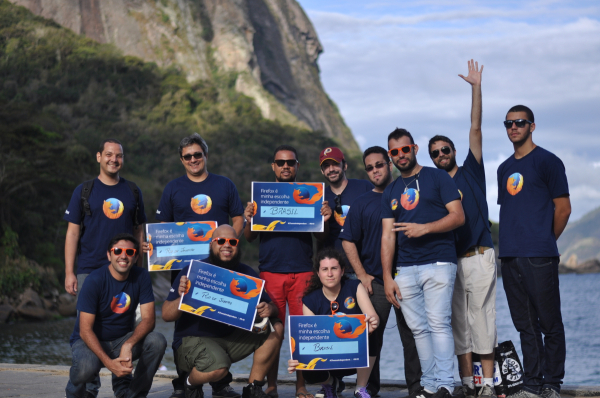 What a team, what a backdrop!

We also had many news being released in Firefox’s anniversary like Firefox Developer Edition, the only browser made for developers and the SpeechRTC API made by André Natal, a great Brazilian friend, the SpeechRTC is an API for speech recognition to be used within Firefox OS and others Mozilla’s products. It is a scalable, flexible and easy to learn platform that focus on delivering a great experience for users. Mozilla once again surprises and shows that it created Firefox with us in mind, developers and users and it will fight for a free and just Web, made by all and for all.

[By TJ Lee] On November 9th, a team made up of rockstar Mozillians boarded a Firefox Cable Car that drove around San Francisco hitting iconic landmarks. Photos were taken, smiles were shared, and Firefox love was spread! It was declared that day that Firefox is the independent choice in San Francisco. Here’s how it went down:

It’s 9:30am Sunday morning and there’s excitement in the air at Mozilla SF office. Mozillians dressed in Firefox gear, blue, orange, and all kinds of funky wear started filling the lobby. Boxes of t-shirts, tattoos, and postcards are stacked by the door while just outside…a gigantic Firefox Cable Car is parked.

Decked out in balloons, the Cable Car is a classic form of transportation in the city of San Francisco. Of course we had to Firefox-it up! With a huge sign that says, “Celebrate 10 Years of Firefox”, it screams what today is all about. At 10am sharp the group of excited Mozillians, including our very own Foxy (rocked by Michael Ellis), head out to make a buzz around iconic locations in San Francisco. 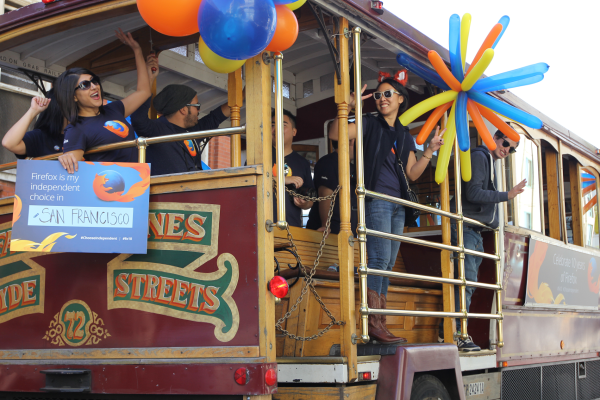 With the Street Team all pumped up, we set up for the itinerary for the day:

As we all stepped onto the Cable Car, you could just feel the excitement of the team. We have Mozillians from Beijing, a Mozillian celebrating her birthday, Mozillian lovebirds, and well – all the best kinds of people! As the Cable Car starts driving, all of us began dancing and cheering. A ton of “WOOHOOS!” were being exchanged as we held up signs and waved at people passing by us on the sidewalks. Any car that drove up next to us were smiling and honking alongside. We even threw a couple of t-shirts into the car of a family whose dad screamed out, “My whole family uses Firefox!”

If you thought being on the Cable Car was crazy fun, getting off to iconic locations was even crazier. As soon as we arrived at Coit Tower, the Street Team got off and began talking to people in the area. We handed them postcards that allowed them to fill in where they’re from. The little kids were especially happy to see Foxy strolling around Coit Tower. We passed out Firefox tattoos, t-shirts, gave a bunch of high fives, and encouraged anyone and everyone to share the photos they’ve taken online with #fx10 and #ChooseIndependent. Every destination following Coit Tower was also a BLAST. Check out these photos to tune in on the fun: 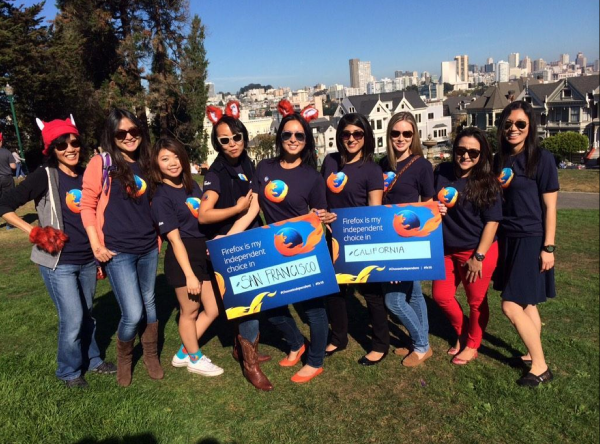 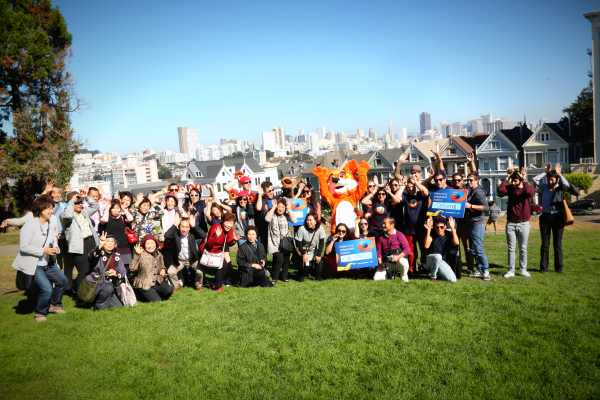 Fun Fact: We met a group of tourists from Japan. Of course we had to invite them in to take a photo with us. They were so happy, it immediately lifted our spirit. Thank you all! 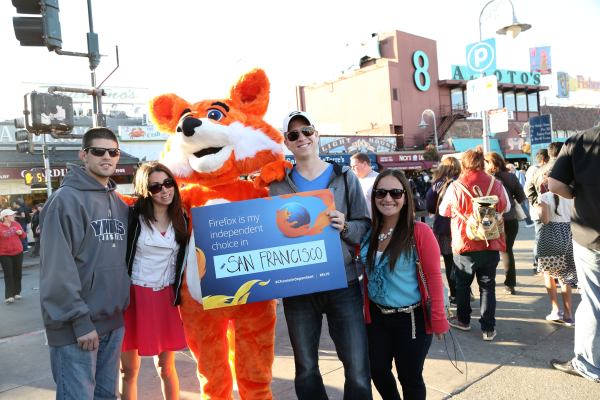 After a day of dancing, photo-taking, and endless fun, we headed back to the Mozilla SF office. From 7 hours of driving around San Francisco, we truly got the word out about Firefox 10th Anniversary. I mean, a giant Firefox Cable Car honking, playing music with a bunch of dancing Mozillians? You can bet Firefox was heard today. 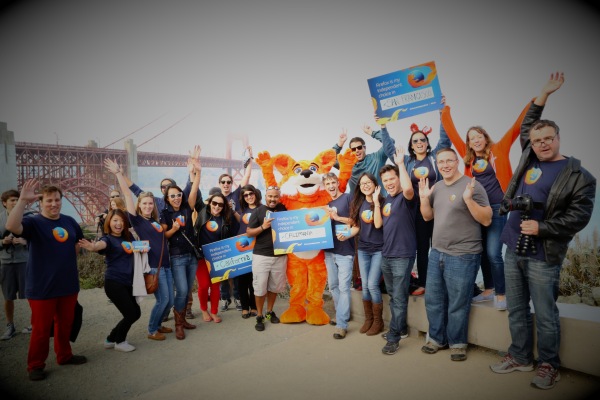 What an inspiring event it was to see Mozillians come together to make this Cable Car adventure a success. The Firefox Cable Car was seen by thousands of people in SF and even more online. The positive reactions we’ve received from passerbyer made this an incredibly rewarding experience. As much as Mozilla focuses on contributing to the open Web, we also focus on spreading the Firefox love in-person and on the ground.

Thank you to everyone who made this event possible. We are truly lighting a fire around the world – one city at a time.