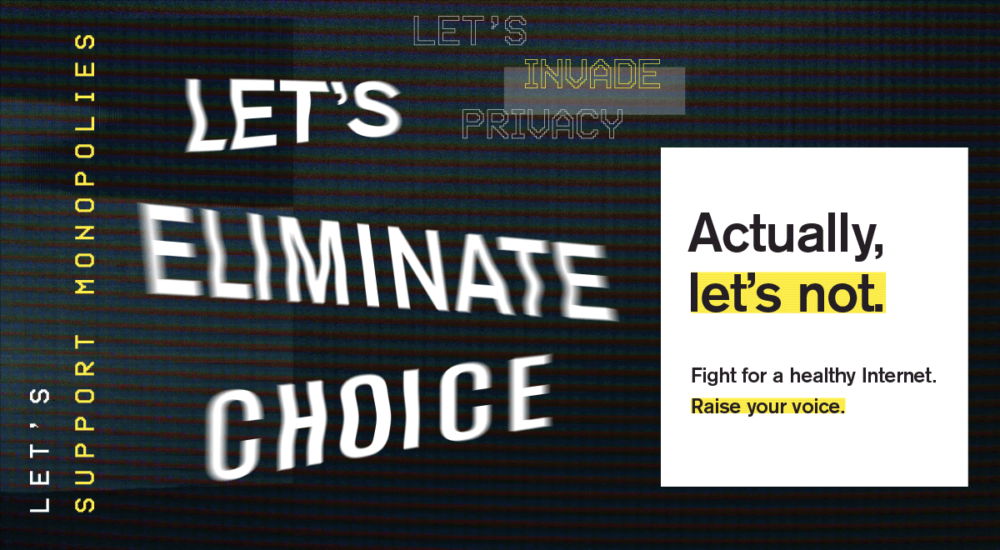 You can still comment for net neutrality and a healthy Internet

How much do people love the Internet? Quite a lot, by the looks of it. As of today, people like you submitted 9.5 million comments for net neutrality to the FCC. That’s more than double the number of comments submitted in 2014. Way to go, everyone!

We added Mozilla’s official comments to the incredible 75,000 you generated through our online action form. We argue against the rollback of protections that FCC chair Ajit Pai is seeking in his so-called “Restoring Internet Freedom” proceeding. Pai wants to gives Internet Service Providers the “freedom” to block, slow down or prioritize paid content online. We’re more focused on what’s good for people. Net neutrality is a critical part of why the Internet is the most fantastically fun, awe-inspiring place we’ve ever built together, and we need to protect it because:

While we can pat ourselves on the back for a job well done on the commenting, the fight for net neutrality is far from over.

Here are two things you can do right now for a healthy Internet:

For starters, take a listen to the IRL podcast episode, The Neutral Zone: The Future of Net Neutrality to hear how net neutrality affects ISPs, activists and even maggot farmers in Georgia. (Yes, you read that right. Listen, and you’ll find out more.) Clocking in at 25 minutes and 22 seconds, the podcast is a quick and dirty primer. Pass it on to your friends who think they don’t get net neutrality or that it doesn’t affect them.

Monday, July 17 marked the end of the FCC’s initial comment period, but you can submit comments for net neutrality through Aug. 16. If you (or your friends) haven’t yet spoken up, get up in there and make some comments!

Here’s what the inventor of the Web has to say about net neutrality:

#NetNeutrality allowed me to invent the web without having to ask for permission. Let’s keep the internet open! https://t.co/EFahwkEBnS

Here’s what the “father” of net neutrality has to say:

There are now 6.8 million comments in the FCC’s Net Neutrality docket. Ignoring that is just plain undemocratic

Here’s what Cordozar Calvin Broadus Jr. has to say:

Snoop is on the right side of the #NetNeutrality fight. pic.twitter.com/C0z5uw5Izb

Ur memes weighs in:

Our reaction when the government tries to take our net neutrality rules away. File an FCC comment at https://t.co/8IiiFYCObV #NetNeutrality pic.twitter.com/Gg3cZIYRay

You can also hear what many other opinions on net neutrality, read in dulcet tones over nine hours:

The 9.5 million comments for net neutrality submitted is an impressive feat. Consider, however, that this figure is still shy of the millions of people who depend on a free and open Internet daily. If we come together we can take the Web back to the future — ensuring it’s always open for innovation, competition and freedom of choice.

Later this year, the FCC will consider all of our comments (and we hope they reconsider the plan entirely) and potentially vote on the newest proposal. We fully expect the courts to weigh in if the new rule is enacted, and if that happens, Mozilla will be there to fight.