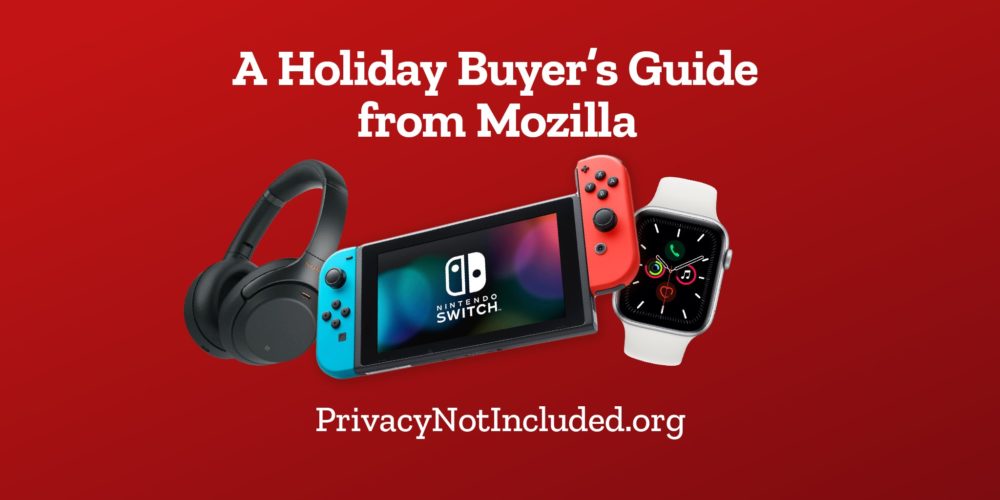 Can Your Holiday Gift Spy on You?

Mozilla is unveiling its annual holiday ranking of the creepiest and safest connected devices. Our researchers reviewed the security and privacy features and flaws of 76 popular gifts for 2019’s *Privacy Not Included guide

Mozilla today launches the third-annual *Privacy Not Included, a report and shopping guide identifying which connected gadgets and toys are secure and trustworthy — and which aren’t. The goal is two-fold: arm shoppers with the information they need to choose gifts that protect the privacy of their friends and family. And, spur the tech industry to do more to safeguard consumers.

Mozilla researchers reviewed 76 popular connected gifts available for purchase in the United States across six categories: Toys & Games; Smart Home; Entertainment; Wearables; Health & Exercise; and Pets. Researchers combed through privacy policies, sifted through product and app specifications, reached out to companies about their encryption and bug bounty programs, and more. As a result, we can answer questions like: How accessible is the privacy policy, if there is one? Does the product require strong passwords? Does it collect biometric data? And, Are there automatic security updates?

The guide also showcases the Creep-O-Meter, an interactive tool allowing shoppers to rate the creepiness of a product using an emoji sliding scale from “Super Creepy” to “Not Creepy.

Says Ashley Boyd, Mozilla’s Vice President of Advocacy: “This year we found that many of the big tech companies like Apple and Google are doing pretty well at securing their products, and you’ll see that most products in the guide meet our Minimum Security Standards. But don’t let that fool you. Even though devices are secure, we found they are collecting more and more personal information on users, who often don’t have a whole lot of control over that data.”

For the first time ever, this year’s guide is launching alongside new longform research from Mozilla’s Internet Health Report. Two companion articles are debuting alongside the guide and provide additional context and insight into the realm of connected devices: what’s working, what’s not, and how consumers can wrestle back control. The articles include “How Smart Homes Could Be Wiser,” an exploration of why trustworthy connected devices are so scarce, and what consumers can do to remedy this. And “5 key decisions for every smart device,” a look at five key areas manufacturers should address when designing private and secure connected devices.

*Privacy Not Included builds on Mozilla’s work to ensure the internet remains open, safe, and accessible to all people. Mozilla’s initiatives include its annual Internet Health Report; its roster of Fellows who develop research, policies, and products around privacy, security, and other internet health issues; and its advocacy campaigns, such as putting public pressure on apps like Snapchat and Instagram to let users know if they are using facial emotion recognition software.

Mozilla is a nonprofit that believes the internet must always remain a global public resource, open and accessible to all. Its work is guided by the Mozilla Manifesto. The direct work of the Mozilla Foundation focuses on fueling the movement for an open Internet. Mozilla does this by connecting open Internet leaders with each other and by mobilizing grassroots activists around the world. The Foundation is also the sole shareholder in the Mozilla Corporation, the maker of Firefox and other open source tools. Mozilla Corporation functions as a self-sustaining social enterprise — money earned through its products is reinvested into the organization.