The first Aurora release of Firefox Marketplace is available to early adopters and testers who are using Firefox for Android Aurora. This release gives developers a means to get feedback on their apps as the Marketplace grows and progresses. At Mozilla, we develop in the open and this initial release will help lead the way for future Marketplace Aurora, Beta and Firefox OS releases in 2013.

This release features a selection of showcase apps in the areas of games, productivity and news & media that users can browse, install and use. Among the first apps ready for testing are Distant Orbit, Jauntly, Soundcloud and Twitter. 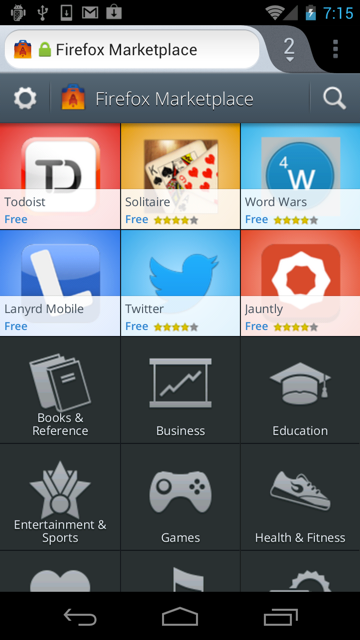 Just last year, we started working to turn the Web into a viable apps development platform. We created the Firefox Marketplace to allow developers to build, distribute and monetize rich, immersive apps that use Web technologies like HTML, JavaScript and CSS. We’ve made amazing progress developing Web APIs across platforms as we work to unlock the power of the Web on mobile, just as we did on desktop.

The Firefox Marketplace will initially be available with Firefox for Android Aurora. Support for Firefox OS and Firefox on other platforms will come in the future.

To find out more about developing Web apps for the Firefox Marketplace, you can read this Hacks blog post.

You can learn more about the Aurora release of Firefox Marketplace and the Firefox apps platform here.