Lots of activity this week.

I created a new devmo wiki page documenting common causes of memory leaks in add-ons.  I based this on a lovely selection of examples provided by Nils Maier.  Unfortunately, I know almost nothing about writing add-ons and so I’m not happy with the current state of the documentation.  I’ve taken it as far as I can, but it very likely has errors, leaves out important cases, conflates distinct concepts, and generally is not as good as it should be.  This documentation is really important — we have good tools for identifying when add-on leaks occur but we don’t yet have good tools for identifying their causes.  Until we have those tools, documentation is the only way we can help add-on authors fix leaks.  If someone who knows more about add-ons is willing to help please contact me!

Jan fixed several leaks in the Galaxytoolbar add-on.  The new version is 2.6.12.

A small number of add-ons have been found that disable Firefox’s XUL cache.  This is a recipe for disastrous performance, and so Matt Basta updated the AMO add-on validator to detect this. 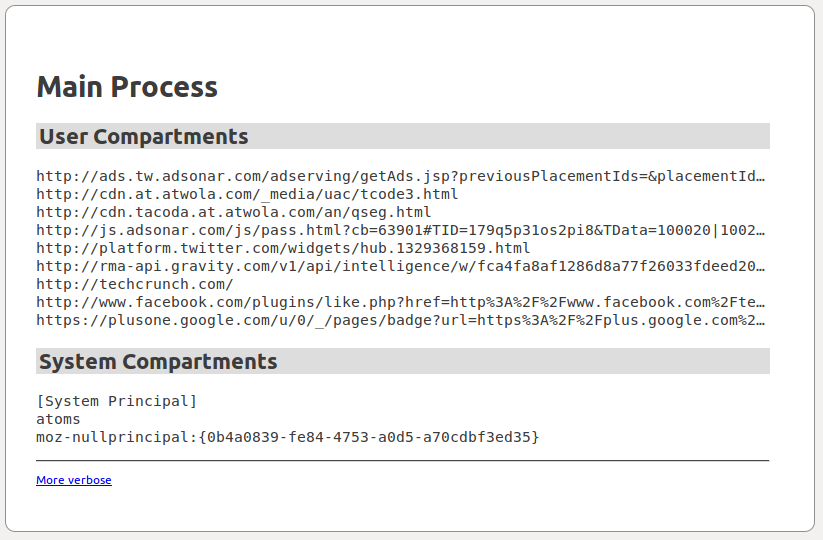 Some things to note:

Olli Pettay created about:cc, an add-on that can detect various kinds of document leaks relating to cycle collection.  Olli has already found several leaks with this tool.  Jan Honza Odvarko has written about:ccdump, a similar but prettier add-on.  I’m not certain but I think Olli and Jan are now co-ordinating their efforts.

Kyle Huey fixed a zombie compartment that occurred when searching within pages with onclick handlers, which is a pretty common operation.

Jeff Muizelaar fixed a huge Mac-only leak relating to text rendering.  This was a recent regression that isn’t present in any released version of Firefox.

Josh Aas fixed a bug in cookie clearing — prior to Josh’s fix, if you cleared all cookies, Firefox would launch an instance of the plugin-container process for every plug-in installed, which could cause freezes and memory spikes.

Lots of movement there:  plenty of bugs fixed, but even more new ones.  Roughly 20 of the new ones fell into the following three categories.

This is a good thing!  It shows that new policies and tools are exposing existing problems.  I expect this higher level of new bug filing will continue for a couple of weeks.

In your documentation https://developer.mozilla.org/en/Extensions/Common_causes_of_memory_leaks_in_extensions you have used the unload() function in the section meant for removing event listener for bootstrapped add-ons.
It would be better to provide the unload function also, as user would think that it is a predefined function. Or do not use it at all ?
For the record, I am editing and providing a link to the gist for the unload function. Hope it helps.

I had a thought – valuable or not I do not know. Would it be helpful to add a link at the bottom of about:memory to about:compartments?
This might be a good place for other memory related ‘about:’s should they arrive. Pages such as about:compartments is memory related but doesn’t fall in the scope of about:memory’s features. It could be a help to someone trying to troubleshoot/explore memory stuff.

Is there any reason why the crowdsourcing (for want of a better term) approach cannot be taken to identifying add-on leaks? I remember reading somewhere about references to the window object being a big source of leaks. Is it as simple as reading through the source code of an add-on and looking for such references then seeing if they get unreferenced? It may sound very laborious but I’d enjoy doing that if it helps to make Firefox better. Having a web developer background, add-ons are more my scene in terms of any coding I could do to help the project. More so than C++ and so on, for example.

Possibly a more useful crowdsourcing technique is to just test add-ons to see if they create zombie compartments when exercising their basic functionality. That’s faster and easier than looking through the source code. If you want to do this you could just start with the most popular ones on AMO — even though each AMO add-ons will eventually be tested for leaks when new versions are reviewed, it wouldn’t hurt to have someone look at them sooner. If you find any leaks, please file bugs!

Actually, see https://bugzilla.mozilla.org/show_bug.cgi?id=730737, which is about crowdsourcing the testing of the top 100 add-ons, including non-AMO ones.

Now reviewed. It makes it super easy to find zombie documents. I have a small cluster that seems to involve a posterous page and two twitter widgets, but after walking the graph a bit I’m not clueful enough to diagnose it.

What’re the differences between the cycle and garbage collectors?

I was wondering how firefox handles big images, e.g., in the following webpage:
http://www.newsmth.net/bbstcon.php?board=Picture&gid=791494&start=791494&pno=1
which eats up ~1GB memory.

This is really great work. Its good to see that problems are being addressed and solved very well. There should be an active system that dynamically updates that black lists addons which are known to have problems and don’t run good.