A Certification Authority (CA) is an organization that browser vendors (like Mozilla) trust to issue certificates to websites. Last year, Mozilla published and discussed a set of issues with one of the oldest and largest CAs run by Symantec. The discussion resulted in the adoption of a consensus proposal to gradually remove trust in all Symantec TLS/SSL certificates from Firefox. The proposal includes a number of phases designed to minimize the impact of the change to Firefox users:

After the consensus proposal was adopted, the Symantec CA was acquired by DigiCert; however, that fact has not changed Mozilla’s commitment to implement the proposal.

Firefox 60 is expected to enter Beta on March 13th carrying with it the removal of trust for Symantec certificates issued prior to June 1st, 2016, with the exception of certificates issued by a few subordinate CAs that are controlled by Apple and Google. This change affects all Symantec brands including GeoTrust, RapidSSL, Thawte, and VeriSign. The change is already in effect in Firefox Nightly.

Mozilla telemetry currently shows that a significant number of sites – roughly 1% of the top one million – are still using TLS certificates that are no longer trusted in Firefox 60. While the number of affected sites has been declining steadily, we do not expect every website to be updated prior to the Beta release of Firefox 60. We strongly encourage operators of affected sites to take immediate action to replace these certificates.

If you attempt to visit a site that is using a TLS certificate that is no longer trusted in Firefox 60, you will encounter the following error:
﻿

Clicking on the “Advanced” button will allow you to bypass the error and reach the site: 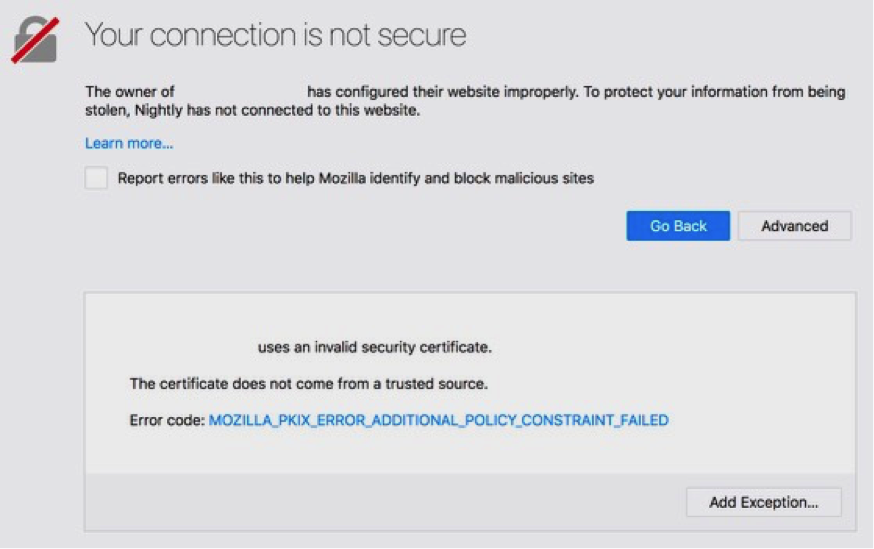 These changes are expected to be included in the final version of Firefox 60 that is planned to be release on May 9th, 2018.

In Firefox 63, trust will be removed for all Symantec TLS certificates regardless of the date issued (with the exception of certificates issued by Apple and Google subordinate CAs as described above).