During the recent Work Week in London we had the utmost pleasure of hanging out with some of you (we’re still a bit sad about not everyone making it… and that we couldn’t organize a meetup for everyone contributing to everything around Mozilla).

Among the numerous sessions, working groups, presentations, and demos we also had a SUMO Show & Tell – a story-telling session where everyone could showcase one cool thing they think everyone should know about.

I have asked those who presented to help me share their awesome stories with everyone else – and here you go, with the first one presented by Philipp, one of our long-time Firefox champions.

Take a look below and learn how we’re dealing with certificate errors and what the future holds in store:

One of the most common and prolonged user problems we face at SUMO and all other support channels is users being unable to visit secure HTTPS websites because they see something like this instead: 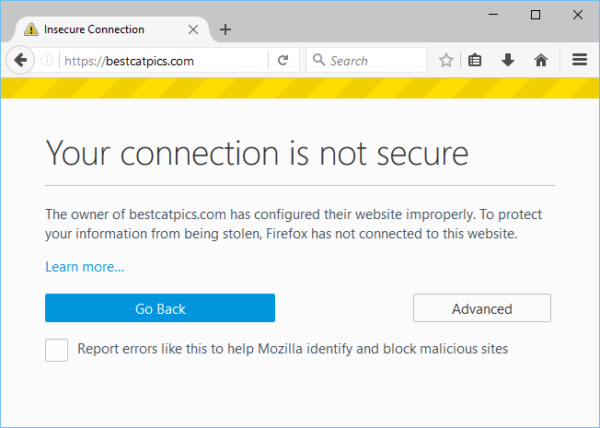 From Firefox telemetry data we know that at least 115 million users a month end up seeing such an error page – probably even more, because Firefox telemetry is depending on a working HTTPS connection as well, of course (we do care about our users’ privacy!).

Since the release of Firefox 44 there is a “Learn more…” link on those error pages, pointing to our What does “Your connection is not secure” mean? article, which quickly became the most visited troubleshooting article on SUMO after that (1.3 million monthly visitors). We try to lead users through a list of common fixes and troubleshooting steps in the article, but because there is a whole array of underlying issues that might cause such errors (for example – misconfigured web servers or networks, a skewed clock on a device, intercepted connections) and the error message we show is not very detailed, it’s not always easy for users to navigate around those problems.

The most common cause triggering these error pages according to our experience at SUMO is a “man-in-the-middle attack”. When that happens, Firefox does not get to see the trusted certificate of the website you’re supposed to be connected to, because something is intercepting the connection and is replacing the genuine certificate. Sometimes, it can be caused by malware present within the operating system, but the software causing this doesn’t always have to be malicious by nature – security software from well-known vendors like Kaspersky, Avast, BitDefender and others will trigger the error page, as it’s trying to get into the middle of encrypted connections to perform scanning or other tasks. In this case, affected users will see the error code SEC_ERROR_UNKNOWN_ISSUER when they click on the “Advanced”-button on the error page:

In order to avoid that, those software products will place their certificate (that they use to intercept secure connections) into your browser’s trusted certificate store. However, since Firefox is implementing its own store of trusted certificates and isn’t relying on the operating system for this, things are bound to go wrong more easily for us: maybe the external software is failing to properly place its certificates in the Firefox trust store or it only does so once during its original setup but a user installs and starts to use Firefox later on, or a user might just refresh his Firefox profile and all custom certificates get lost in the process, or… You get the picture – so many ways things could go wrong!

As a result, a user might have problems accessing any sites using HTTPS (including personal or work email, favourite search engines, social networks or web banking) in Firefox, but other browsers will still continue to work as expected – so, we are in danger of disappointing and discouraging users from using Firefox!

Starting with Firefox 48, scheduled to be released in early August, users who land on a certificate error page due to a suspected “man-in-the-middle” attack, will now be lead to this custom-made SUMO article after they click on “Learn more” (Bug 1242886 – big thanks to Johann Hofmann for implementing that!). The article contains known workarounds tailored for various security suites, which can hopefully put many more affected users in the position to fix the issue and get their Firefox working securely and as expected again.

Ideally, I would imagine that we would not prohibit Firefox users from loading secure pages when a certificate from a known security software is used to intercept a secure connection in the first place… But we might find more subtle ways of helping the user realise that their connection might be monitored for safety reasons, rather than intercepted for malicious purposes.

…thank you, Philipp! What is certain is that we won’t stop there and will continue to work on reducing the biggest user pain-points from within the product wherever possible…

We also won’t stop posting more stories from the Show & Tell – at least until we run out of them ;-) I hope you enjoyed Philipp’s insight into one of the complex aspects of internet security, as provided by Firefox.

Localization (l10n) and community coordinator for SUMO - come rock the helpful web with us!