Developers got their first glimpse at detailed statistics for their add-ons in early 2008 when we launched the Developer Statistics Dashboard for every add-on hosted on AMO. Since then, we’ve made incremental improvements to this tool, such as adding grouping and comparison options, data tables, locale usage stats, contributions, and most recently download sources.

In July, we asked developers to take a survey about how they use the Statistics Dashboard, and as part of our AMO rewrite currently underway, we’ll be revamping the dashboard.

Here’s a mockup from our designer, Chris Howse, of the overview page of the new dashboard: 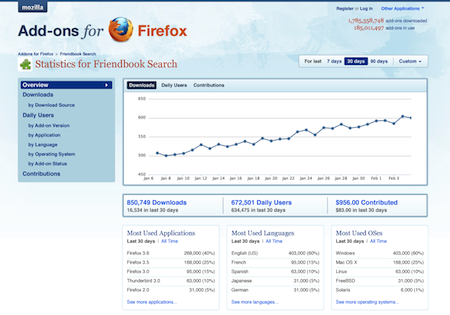 A few comments on the new design:

You can see the rest of the mockups and design discussion in bug 540885 and implementation in bug 543548.