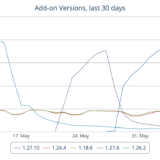 We’re revamping the statistics we make available to add-on developers on addons.mozilla.org (AMO).

These stats are aggregated from add-on update logs and don’t include any personally identifiable user data. They give developers information about user adoption, general demographics, and other insights that might help them make changes and improvements.

The current system is costly to run, and glitches in the data have been a long-standing recurring issue. We are addressing these issues by changing the data source, which will improve reliability and reduce processing costs.

Until now, add-on usage statistics have been based on add-on updates. Firefox checks AMO daily for updates for add-ons that are hosted there (self-distributed add-ons generally check for updates on a server specified by the developer). The server logs for these update requests are aggregated and used to calculate the user counts shown on add-on pages on AMO. They also power a statistics dashboard for developers that breaks down the usage data by language, platform, application, etc. 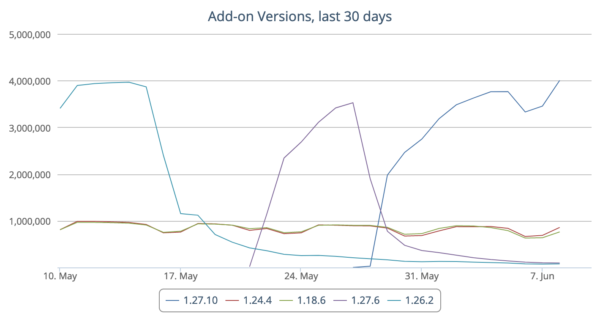 In a few weeks, we will stop using the daily pings as the data source for usage statistics. The new statistics will be based on Firefox telemetry data. As with the current stats, all data is aggregated and no personally identifiable user data is shared with developers.

The data shown on AMO and shared with developers will be essentially the same, but the move to telemetry means that the numbers will change a little. Firefox users can opt out of sending telemetry data, and the way they are counted is different. Our current stats system counts distinct users by IP address, while telemetry uses a per-profile ID. For most add-ons you should expect usage totals to be lower, but usage trends and fluctuations should be nearly identical.

Telemetry data will enable us to show data for add-on versions that are not listed on AMO, so all developers will now be able to analyze their add-on usage stats, regardless of how the add-on is distributed. This also means some add-ons will have higher usage numbers, since the average will be calculated including both AMO-hosted and self-hosted versions.

Other changes that will happen due to this update:

We will begin gradually rolling out the new dashboard on June 11. During the rollout, a fraction of add-on dashboards will default to show the new data, but they will also have a link to access the old data. We expect to complete the rollout and discontinue the old dashboards on July 9. If you want to export any of your old stats, make sure you do it before then.

We plan to make a similar overhaul to download statistics in the coming months. For now they will remain the same. You should expect an announcement around August, when we are closer to switching over to the new download data.