After last month’s hiccup, yesterday Net Applications released its latest market share report for May 2008.  Firefox showed a nice improvement in the April to May timeframe, going from 17.76% to 18.41% worldwide market share.  Net Applications provides their own interpretation here.

The interesting part of the story is that while Firefox 3 continues to show rapid adoption, most of our growth was driven by increased usage of Firefox 2.  In other words, Firefox 3 adoption is not coming at the expense of Firefox 2 usage (it’s not simply the case of existing users updating from Fx2 to Fx3).  Clearly, the overall health of the Firefox brand is amazingly strong as we head towards the official release of Firefox 3.

The first chart below details the change in Firefox market share numbers over the last five weeks, and the second chart highlights the latter two columns:  Firefox 3 adoption relative to the share of Opera (I didn’t mean to put Opera on the spot here… it just seemed like a relatively good benchmark).  Source for all data: Net Applications. 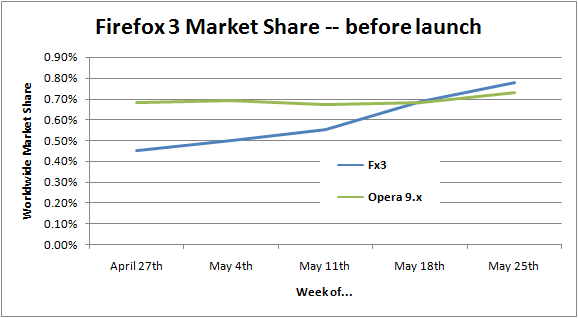