A few months ago, we laid out the following:

“Installing a piece of software can be a challenging process for the typical person to traverse.  For example, with Firefox, we know that each day there are more than 50,000 people who fall into the following group – they complete the download process (receive the full data/file), but don’t then complete their installation of Firefox.”

To help solve this problem, we integrated the following feedback mechanism into the Firefox installer for a single day in late March. 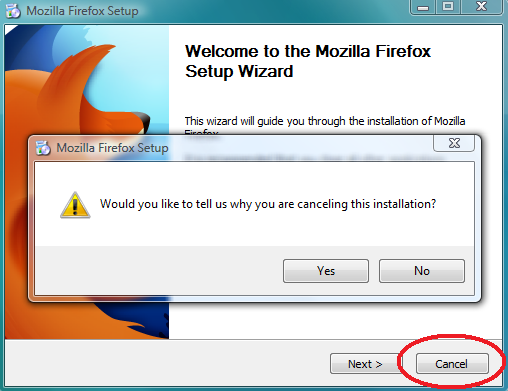 As a result, we arrived at two critical issues that were preventing users from installing Firefox:

In response, the Firefox team integrated a fix for Problem #1 into the Fx3.5 installer (released last month).  In short, the installer now requests elevation for non-admin users on Vista and above when UAC is turned on (see bug 404541 for details) and fallback to non-privileged install locations when the user doesn’t have write access to the Program Files directory.

Did the fix work?  Did the modified Firefox installer actually lead to an improved user experience?

This past Tuesday, we re-ran the feedback mechanism for a 24-hour period, so that any user canceling out of the Firefox installer was asked if they wanted to leave feedback.  And what did we find?  With the chart below, of the 400+ responses we received, I went through the individual comments left by users and grouped them into 5 different categories.  Problem #1 (noted above) virtually disappeared.  Problem #2 grew its overall share of the pie (compared with last time). 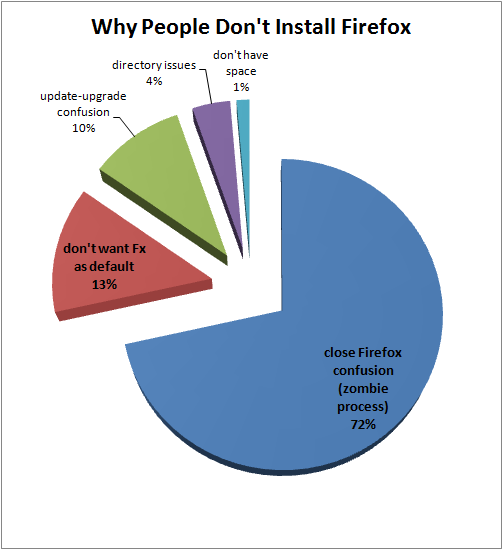 How did we arrive at our estimated impact of 2,000,000 users?  We estimate that roughly 5,000 people were running into Problem #1 – daily.  Multiplied by 365 days, that equates to roughly 2 million people who will be aided by an improved experience over the next year.

Up next on the horizon… the Firefox team is looking into implementing some workaround solutions for Firefox users falling into the blue pie slice above (the timeframe is a couple months out).  Also, with our next post, I’ll dive into the second most popular comment – selecting Firefox as your default browser during the installation process.  Stay tuned!