Like last time, let’s start with the punch line:

These insights were arrived at via our current user outreach efforts.  When people visit the Firefox “Whatsnew” page – which users automatically hit after each Firefox update – they have the option of providing feedback and comments.  More than 16,000 people have been kind enough to provide feedback over the past six weeks.  If you’re curious how this works from the user’s perspective, click here to the Fx3.5.4 whatsnew page and then click on the orange feedback button.

Here’s a breakdown of what has recently been on the mind of users: 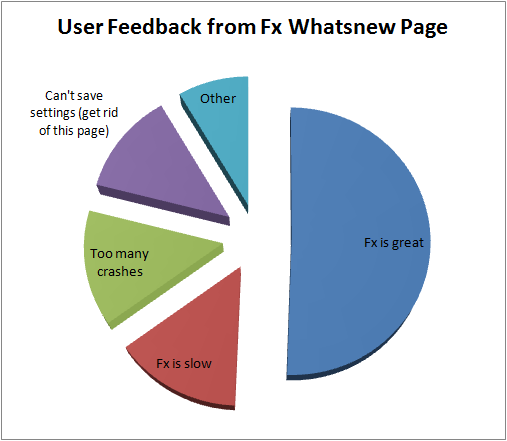 We previously shared analysis of comments from people visiting the Firstrun (installation) page, and the chart above looks somewhat similar.  The fact that so many people made a point of saying something positive is amazing!

On the other hand, there is one negative item that we first took note of last time.  A significant number of people left a comment along the lines of, “why does this page open every time I open Firefox?  Please get rid of it.  I previously set my home page and Firefox won’t save the setting.” On the plus side, we have already taken this insight and turned it into action.  The Firefox team has prioritized a fix via bug 495735, and it should ship it in the next release of Firefox.

Lastly, there was one other group of people who were particularly frustrated.  For each of the groups in the pie chart above, we can also look at their average satisfaction score (scale of 1 to 5):

Fortunately, the crashiness of Firefox is a known issue, and making Firefox less crashy has been a top priority for the Mozilla community in recent months.  Given our current focus in this area, I would guess that if we rerun this same user outreach program a few months from now, we’d see that green pie slice either dramatically shrunk or completely eliminated.