Tuesday’s earthquake in Haiti devastated hundreds of thousands of lives and the aftershocks are felt physically and emotionally throughout the world.

The Mozilla community includes thousands of people in Haiti, and in our metrics, we can see the hole this disaster has left in our community.  The chart below shows Firefox usage in Haiti this week (it’s based on a once daily “ping” that we see from active users) and it’s broken down by hour (local time in Haiti).  This picture is not pretty and it suggests that much of the communications infrastructure within Haiti has been adversely affected. 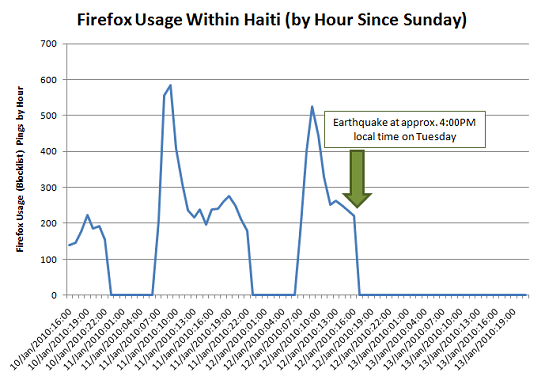 Everyone in Haiti could use our thoughts and help, and we’d like to put out a personal plea to the Mozilla family to consider these members of our community and donate if you can.

(Thanks to Daniel Einspanjer for contributing to this post.)