Mozilla recently advertised a Firefox 3.5 upgrade to users of Firefox 3 (this is also referred to it as a “major update prompt”) in an effort to migrate people to the latest version of Firefox.  As of earlier this month, about 32% of all Firefox users were still on a version of Fx3, and as a result of the mid-January push, that number is now down to about 22%.

As a side benefit to this initiative, we also took the opportunity to see what feedback people had, specifically asking users to tell us what was on their mind if they were choosing not to upgrade.  We did this once before when upgrading users from Fx2 to Fx3, and the results were extremely impactful, so we wanted to continue this once again as part of our broader user outreach efforts.

For people interesting in leaving feedback, here is the survey they saw: 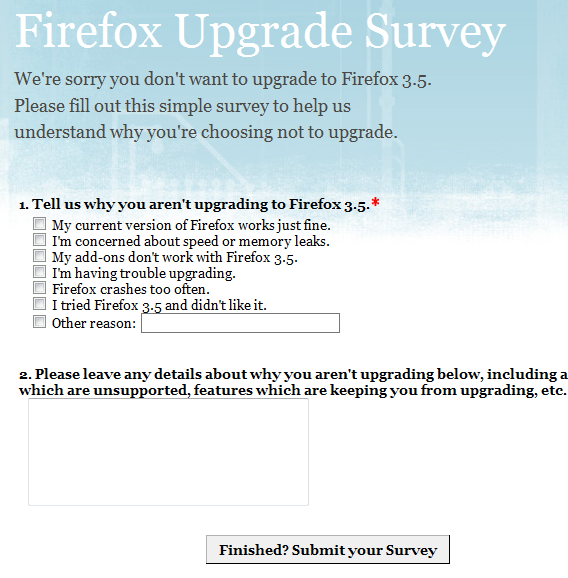 A little more than 5,000 people were kind enough to share their thoughts.  In turning to the results, let’s start with question #1: 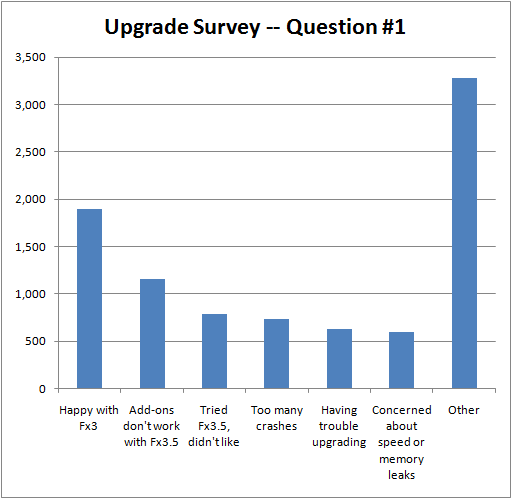 The most surprising insight above is that 53% of respondents selected the “Other reason” check box.  That suggests that the proposed answers we listed were found somewhat unsatisfactory and that people had other ideas on their mind.  Clearly, understanding “Other reason” and seeing what users said within question #2 should provide us with much more insight than the chart above.

Below is a list of the most common phrases people typed into the “Other reason” box.  What’s most surprising here?  The vast majority of comments are about cost, i.e., “is this upgrade free?”.  Taking this insight and turning it into action, we’re planning to make clear that “Firefox is free” within future upgrade prompts/advertisements. 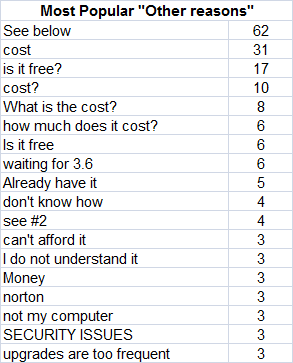 Next, let’s look at how people responded to question #2.  It’s a free form text box, so we manually read through comments, sorting them into different categories: 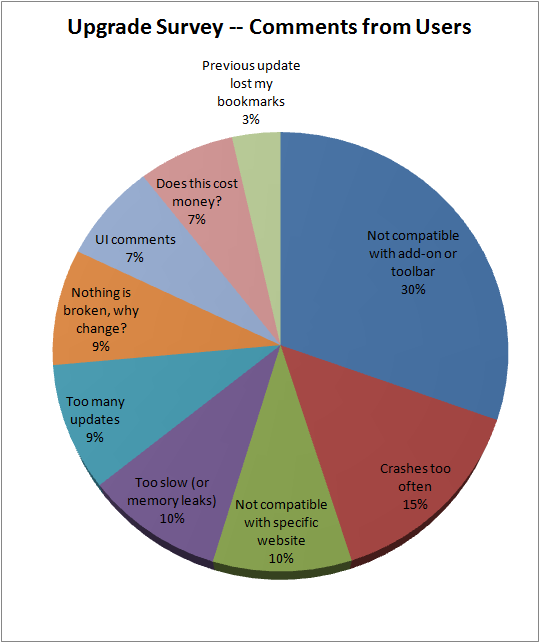 One easy way to interpret this pie chart is to compare it with what we saw last time (when users were upgrading from Fx2 to Fx3).  UI related comments have almost vanished.  On the other hand, add-on and extension compatibility comments (Norton was far and away the #1 cited) and crash comments have both risen dramatically as their total share of the pie.  For “not compatible with specific website”, Facebook and specific Google pages (e.g., calendar) seemed to be the most frequently mentioned.

Moving forward, it will be critical that we acknowledge and address the concerns faced by these users.  We’ve been working hard in recent months to reduce the crashiness of Firefox, and some positive results are already evident.  For addressing the add-on and toolbar compatibility issues, the Firefox Support team has been raising the visibility of the top extension issues cited by users (Norton, Roboform, etc.).

And how do we properly communicate all of this the next time we advertise a major upgrade?  We currently highlight these three bullet points:

The last two should probably be changed to “This upgrade is free” and “Improved stability, fewer crashes.”  Your thoughts?