Over the past five months, Firefox has seen a 40% improvement in stability.  That’s incredible!  While the Firefox development community continues to focus its efforts on stability and performance (i.e., 100% improvement is still being strived for), we’re proud to highlight the most recent numbers.

How did we calculate that 40% improvement?  We took a look at the Crash Reports data, along with an estimated ratio of daily crash instances to active daily users of Firefox.  With that data in hand, we first wanted to know how the number of daily crash instances has been trending by major version of Firefox, e.g., is Fx3.6 particularly more stable than previous releases and what does its trending look like? 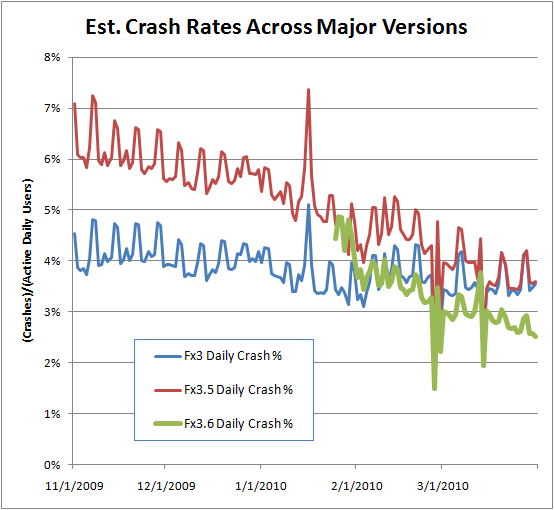 The chart above looks amazing… and it brought us to the next question… rolling up major versions, what does the total universe of Firefox stability look like?  Using the same numbers as seen above, we simply added them together to come up with the high-level metric – estimated ratio of daily crash instances to active daily users of Firefox.  The trend of the blue line below represents a 40% reduction since early November.  Spectacular! 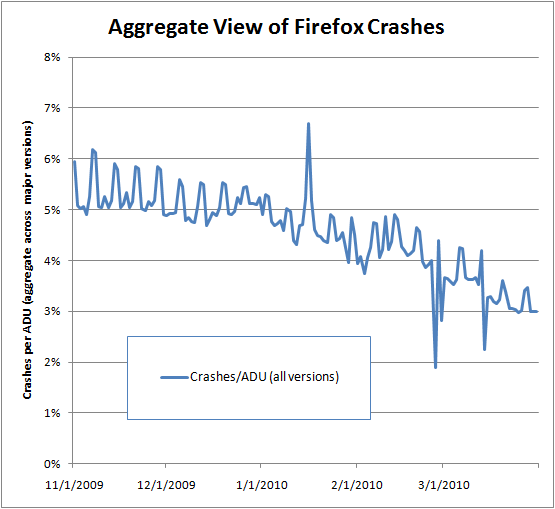 So, how exactly did this happen?

As mentioned previously, improving Firefox stability was a top level objective of the Mozilla community during the last few months of 2009.  That effort was led by a variety of folks across a wide breath of the community… people who saw the many complaints about crashes, collected the data, figured out what was causing the most pain, addressed those issues (sometimes in code, sometimes by working with partners) and saw product improvements.

And in addition to hitting a home run with Fx3.6 and reducing the crashiness of Fx3.5, a majority of Firefox users quickly migrated to Fx3.6… adding all that up drove what you see in the charts above.

There are still more improvements to come.  For example, with a significant percentage of crashes in Flash, a lot of work around stability improvement for Firefox users is currently going into Flash Player 10.1.  If you’re personally experiencing any crashiness issues when using Firefox, please make sure you’re on the latest version of Firefox and feel free to use tools like bugzilla and hendrix to notify the community.