Last post, we identified the most and least commonly used menu items. Today, we will answer another question: how many different menu items do people actually use? It’s a simple question, but one that could be critical to the proposal to condense the menu bar into a single application button.

The 80-20 rule, or the Pareto principle, suggests that the number is on the low end — around 14 items. This popular rule of thumb states that for many events, 80% of effects come from 20% of the causes. Applied to software, the common saying is that 80% of all end users generally use only 20% of an application’s features. 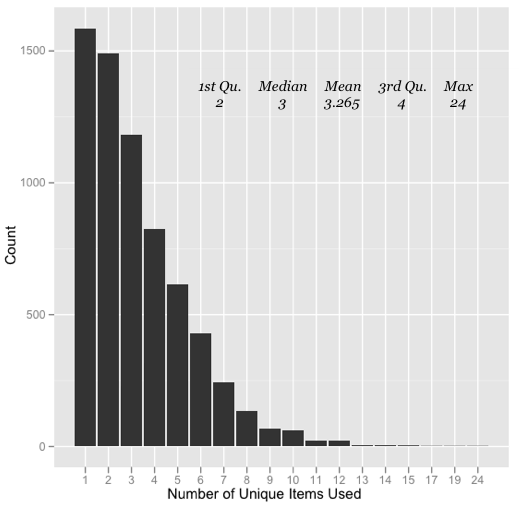 We expected a median around 14, but the actual median is 3 — almost 5x smaller! This means that 50% of all users clicked 3 items or less during the course of the study. Moreover, only 25% of people clicked on more than 4 commands. The rule of thumb states that 80% of users use only 20% of an application’s features, but menu bar behavior is far more limited: 80% of users use only 5 menu items, or just 7% of the total number of commands!

We were also surprised by the number of people who click only one unique menu item. Considering that over 20% of people fall into this category, we want to investigate further and identify which single item these individuals are using. Identifying these items is especially important since these single commands account for 100% of these users’ menu bar interactions — imprudently removing any of these commands could severely damage the browsing experience of these users.

Conveniently, the list roughly matches the ranking of the most commonly used menu items. This means that we can continue to base menu design decisions off of this ranking, without crippling the single-item users. If the orders were radically different, we may have needed to give special consideration to items that are important to single-item users, but not commonly used otherwise.

The presence of items such as “User Bookmark Item” and “Unknown”, however, leads us to some qualification of our findings:

Nevertheless, we are confident in our general point that relatively few menu items account for nearly all the interactions with the menu bar. Given how many items are actually used, the menu bar is too comprehensive and takes up too much valuable real estate — in other words, a condensed menu bar seems well justified.

Thoughts? How many different menu items do you typically use?