One issue that’s been on everyone’s mind lately is privacy.  Privacy is extremely important to us at Mozilla, but it isn’t exactly clear how Firefox users define privacy.  For example, what do Firefox users consider to be essential privacy issues?  What features of a browsing experience lead users to consider a browser to be more or less private?

In order to answer  these questions, we asked users to give us their definitions of privacy, specifically privacy while browsing, in order to answer these questions.  The assumption was that users will have different definitions, but that there will be enough similarities between groups of responses that we could identify “themes” amongst the responses. By text mining user responses to an open-ended survey question asking for definitions of browsing privacy,  we were able to identify themes directly from the users’ mouths:

We  knew from our own focus group research that users are concerned about viruses, theft of their personal information and passwords, that a  website might misuse their information, that someone may track their  online “footprint”, or that their browser history is visible to others.   Users view things like targeted ads, spam, browser crashes, popups, and  windows imploring them to install updates as security risks.

But it’s difficult to broadly generalize findings from focus groups.  One group may or may not have the same concerns as the general population.  The quality of the discussion moderator, or some unique combination of participants,  the moderator, and/or the setting can also influence the findings you get from focus groups.

A typical  way to approach this problem in surveys is to use open-ended survey questions.  In the pre-data mining days, we would have to manually code  each of these survey responses: a first pass of all responses to get an idea of respondent “themes” or “topics” and a second pass to code each  response according to those themes.  This approach is costly in terms of time and effort, plus it also suffers from the problem of reproducibility; unless themes are extremely obvious, different coders might not classify a response as part of the same theme.  But with modern text mining methods, we can simulate this coding process much more quickly and reproducibly.

Because text mining is growing in popularity primarily due to its computational feasibility , it’s important to review the  methods in some detail.  Text mining, as with any machine learning-based approach, isn’t magic.  There are a number of caveats to make about the text mining approach used. First, the clustering algorithm I chose to use requires an arbitrary and a priori decision regarding the number of clusters.  I looked at 4 to 8 clusters and decided that 6 provided the best trade-off between themes expressed and redundancy.  Second, there is a random component to  clustering, meaning that one clustering of the same set of data may not produce the exact same results as another clustering. Theoretically,  there shouldn’t be tremendous differences between the themes expressed in one clustering over another, but it’s important to keep these details in mind.

The general idea of text mining is to assume that you can represent documents as “bags of words”, that bags of words can be represented or coded quantitatively, and that the quantitative representation of text can be projected into a multi-dimensional space. For example, I can represent survey respondents in two dimensions, where each point is a respondent’s answer.  Points that are tightly clustered together mean that these responses are theoretically very similar with respect to lexical content (e.g., commonality of words). 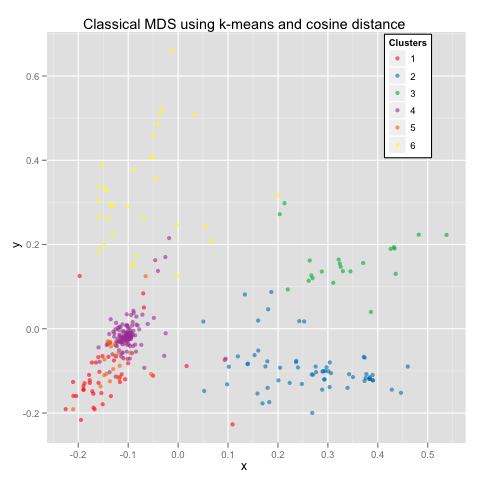 I  also calculated a score that identifies the relative frequency of each word in a cluster, which is reflected in the size of the word on each  cluster’s graph.  In essence, the larger the word, the more it “defines”  the cluster (i.e. its location and shape in the space). 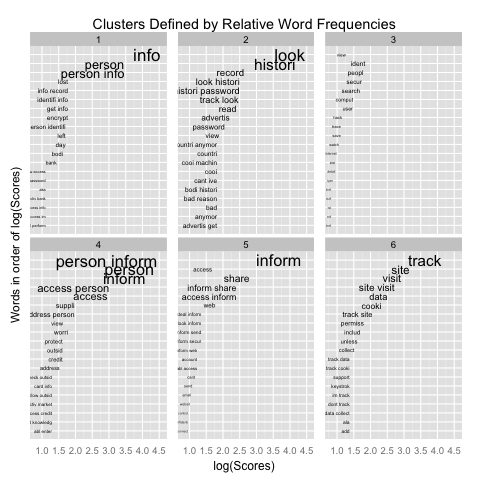 Higher resolution .pdf files of these graphs can be found here and here.

User  privacy and browser security are very important to us at Mozilla, and  developing a product that improves on both requires a deep and evolving  understanding of what those words mean to people of all communities – our entire user population.    In this post, we’ve shown how text mining can enhance our understanding  of pre-existing focus group research and generate novel directions for  further research. Moreover, we’ve also shown how it can provide insight into  users’ perception by looking at the differences in the language they use  to define a concept.  In the next post, I’ll be using the same text  mining approach to evaluate user definitions of security while browsing  the web.

Rebecca is the manager of the Product Data Science team for Firefox. Her team aims to add a dose of empiricism to product strategy and also advance the state of data literacy about the web and beyond.